Martimus. An underwater habitat dedicated to pharmaceutical research. Martimus. A facility that staffs its vessel with inmate labor. Martimus. The place where inmates visit and never return.

Agent Cate Creighton is in love. Unfortunately, as the Agency honeypot, she is knee-deep in an assignment that tests the bounds of her new relationship. It seems eight socialites have gone missing, all wealthy twenty-somethings with influential parents. No one seems to care until a former vice president’s daughter disappears.

When the vice-president shares a tale of false arrest, a broken promise of deportation, an illegal diversion into a private prison, and an alleged trip to an unwater habitat called Martimus, Cate and her colleagues must find a way to follow the same path. In other words, they must enter the right prison, meet the right fixer, wind up on Martimus, and hopefully return in one piece. And it looks like Cate is the perfect bait.

That doesn’t sit well with Cate’s lover, former U.S. Navy Seal Warren Hazelton. He intends to protect her until death ‘til do they part.

Fortunately, another possibility appears, in the form of an MISix agent who has interfered in one too many Agency operations. Tillie Henderson owes them and they are all too willing to serve her up on a plate. It’s race against time as the Agency attempts to lure their adversary out of hiding and into their somewhat ambiguous trap. Maybe then Cate can finally focus on love. 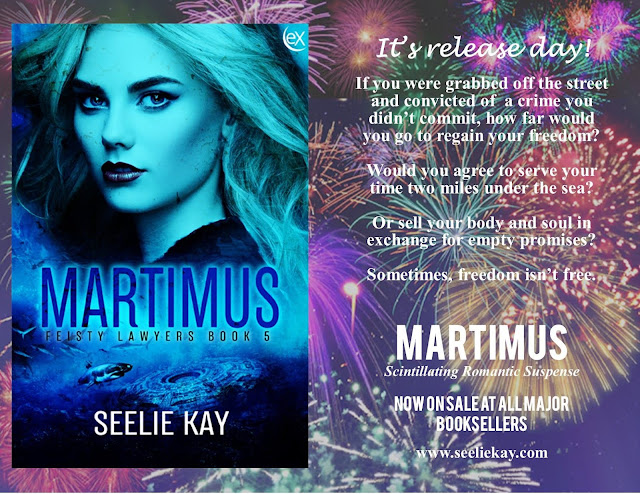 Tom cocked an eyebrow. “Warren, you’re a former Navy Seal. Isn’t there some sort of limit on the amount of time you can spend under the sea before it starts to seriously impair your health?”
Warren frowned. “Usually two weeks. After that, the lack of exposure to the sun and the constant high pressure oxygenated environment would begin to take a toll. There’s also a psychological impact. Think sensory deprivation. Your senses are out of whack because you’ve been dumped into a soundproof sponge. There is no normal sensory stimulation. No sunlight, no sound… Even taste and smell become compromised. Coming back to the real world would be an adjustment.
“In addition, those underwater stations are small. People are right on top of each other. Things we take for granted, like privacy, hot showers, home cooked meals, are in short supply. That can create anxiety, depression, and stress. No way he served that sentence consecutively. He had to take a break in between.”
Warren gazed at Tom. “That environment is more hostile than a prison. You may not be in danger from other inmates, but you are putting your life at risk. Three months sounds like way too much time to be stuck underwater though, especially if you’re not leaving the station for deep sea diving on a regular basis. They must be breaking up the time somehow, otherwise they’d have a pretty tough situation on their hands. A lot of contract workers would be headed to a rubber room. It would be extremely difficult to survive a month, much less three, down there.”
“Could they be treating the inmates like guinea pigs?” Hope asked. “Testing their limits? Tracking actual survival rates?”
Warren sighed. “Possibly. It’s not like they have to answer to anyone. They are located in international waters. No country in particular has legal oversight. I imagine they could be doing anything they want without recourse. Unfortunately, when the prospect of a reduced sentence is dangled in front of some people, they grab it, damn the consequences. If one or two inmates suffer some sort of harm or die along the way, they chalk it up to collateral damage.”
“And who’s going to know?” Cate shook her head. “Someone dies, they probably flush them down a chute into the deep sea and they become shark chum. No evidence left behind.”
Hope cringed. “God, that’s kind of evil. But that still doesn’t answer our original question. Where the hell is Fuzzy? Has he already served out his sentence? Has he been released, and if he has, where the hell is he? He’s the one we need to find. He could have a lot of the answers.”
“That lack of governmental oversight is troubling,” Tom said. “If Cassie McIntyre is down there, I can’t believe the CIA isn’t all over it. At least, our government should be doing a welfare check through the Red Cross or something.”
Warren grimaced. “Unless no one knows she is down there. Think about it. They are on the bottom of the ocean, more than two miles under the sea. It’s not like you can just go down there and knock on the door. Any regular monitoring would be impossible.”
Cate nodded. “And we haven’t been able to confirm that she embarked on the same path as Fuzzy. All we’ve got are suspicions. Right now, she’s missing. We need to sit down with her family and get more information. And we need to find other prisoners who contracted with Martimus.
“Otherwise, we’ve got nothing.” 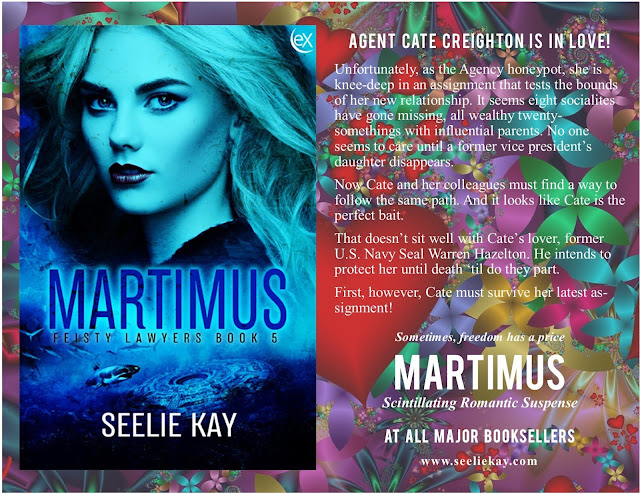 Seelie Kay is a nom de plume for a writer, editor, and author with more than 30 years of experience in law, journalism, marketing, and public relations. When she writes about love and lust in the legal world, something kinky is bound to happen! In possession of a wicked pen and an overly inquisitive mind, Ms. Kay is the author of multiple works of fiction, including the Kinky Briefs series, the Feisty Lawyers series, The Garage Dweller, A Touchdown to Remember, The President’s Wife, The White House Wedding, and The President’s Daughter.

Ms. Kay is an MS warrior and ruthlessly battles the disease on a daily basis. Her message to those diagnosed with MS: Never give up. You define MS, it does not define you! 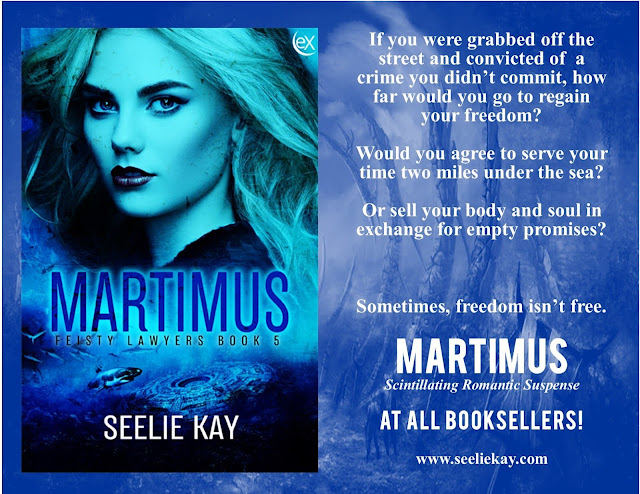 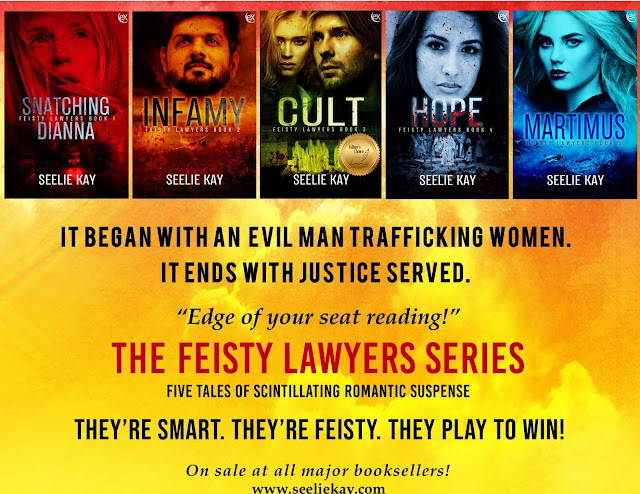 An Interview with Seelie Kay:

Q. Why do you write romance?

Because I am fascinated by the games people play to find and secure a lasting relationship, which is not always love. There’s the chase, the courtship, the falling, the surrender. That’s what I try to capture in my stories.

Q. Do you prefer a certain type of romantic hero?

Q. Why did you write “Martimus?”

This is the final book in the series, so I needed a way to tie up a lot of loose ends. That meant the Feisty Lawyers needed a compelling story to accomplish that. Something in space was beyond the realm of believability, but something at the bottom of the ocean? The possibilities were endless. I went in all sorts of directions at first, but ultimately made Martimus a key step in a much broader journey. The bottom of the ocean is an unforgiving environment. Survival is never guaranteed. Divert a few socialites there to serve out a prison sentence, make then disappear, and you’ve got what I hope is an exciting story!

As a former lawyer, I also developed an interest in private prisons. These are institutions that are governed by a different set of rules and not all institutions follow the same rules. In some cases, the private prison an inmate winds up in can mean the difference between survival and death. In addition, there have been several cases of prosecutors and judges who received a financial incentive to divert inmates to private prison. Some were so incentivized that people innocent of the crimes with which they where charged have been convicted just so the prosecutor or judge could get their kickback. It is an industry that requires serious regulation and monitoring.

Q. How does your former profession as a lawyer impact your writing?

My friends say I am obsessed with justice and I guess that’s true. After 30 years, the law and the legal world are so firmly embedded in my brain that I can’t flush them out. That has become the lens through which I view the world and that naturally guides my characters and plots. Injustice infuriates me, but it also leads me to great stories! 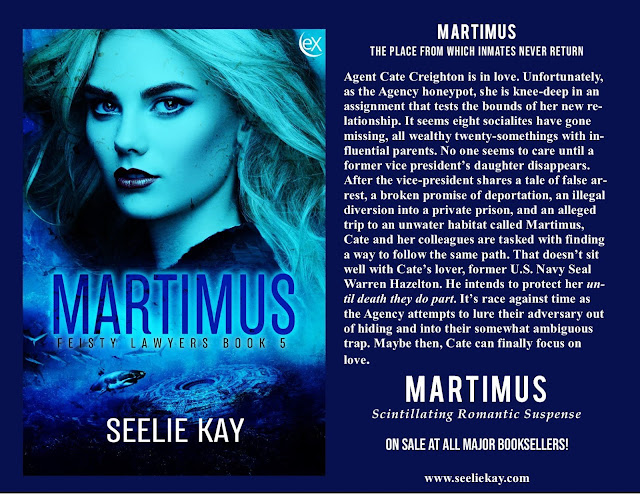 Posted by Reviews By Crystal at 2:16 AM 2 comments: