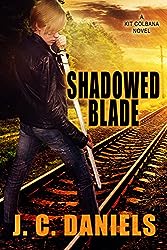 Something wicked this way comes…
The arrival of a very important person in her office seemed to be the start of a lot of problems for Kit Colbana, investigator extraordinaire.  Claiming that he needed somebody with her special skillset, he sends her on a series of jobs that made little to no sense until one culminated with both her and her partner, Justin barely escaping with their lives.
Back in Orlando, they go their separate ways to recover, Justin heading to the house of a local witch, while Kit returns to the Lair, where she’s recently been living with her lover Damon, the Alpha of the Southern Cat Clans.
There’s barely a chance for to catch her breath before trouble of the highest order comes knocking on her door. This time, it’s the form of a psychic by the name of Nova.  Nova has bad, bad news…Justin has gone missing and so has the witch who was going to put him up while he healed. Colleen, one of Kit’s closest, dearest friends.
With all sorts of non-humans disappearing, fury doesn’t even touch what Kit is feeling as she heads out to hunt down the people responsible.
But Kit isn’t the only one out on a hunt…somebody is hunting for her…somebody Kit would rather never, ever see again.
Buy links
Amazon | BN | iBooks | Kobo

It was just pure dumb luck that I found her at all.
The… Well, I can’t say it was a house, but it had been her home. She’d left it weeks ago, maybe longer. It was dying, too.
Granted, when I’d been sent out to look for her, I’d thought maybe it was another wild goose chase—the first job had been a pain in the ass, too.
But this one…
Hell.
I was staring at a dryad.
A real dryad.
She turned her head and stared at me with eyes the color of good, strong oak. In her hand, she had a branch she used to draw circles in the earth.
After a few seconds of us studying each other, she went back to looking out over the river, her gaze sad.
“What is it you want?” she asked, her voice reedy and thin.
Like she was fading, dying as swiftly as the tree she’d left behind.
As I fumbled for an answer, she lifted the branch and plucked off one of the leaves. They were still green. But the moment she plucked that single leaf away, it withered, shriveled, and then it was dust—even before it hit the ground.
“I…” Uneasy, I licked my lips. “Your tree is dying.”
“No.” Those dark brown eyes came back to mine. “It is already dead. It died when I left it. It just hasn’t figured that out yet. It will. But that isn’t what you want.”
“Why did you leave it?”
“Because the wind whispered it was time.” She lifted a shoulder and the wispy strips of cloth that made up her garments drifted with the movement before settling back into black. She was more naked than clothed—covered at her breasts and hips. Her skin was a mottled mix of brown and tan. She could stand in the trees and scarcely be seen, but standing out here on the side of the road and gazing into the river, she stood out.
That was how I’d found her.
I’d been heading back to East Orlando, carefully thinking through the call I’d have to make, when I saw her. I’d been driving the backroads, mostly because I wanted to think, and all the traffic on the main roads annoyed me.
The last thought I’d had before caught sight of the woman had been…I never should have taken this stupid job.
My current client—I now realized—was a self-important, pompous prick. But I’d accepted the contract, and for another three weeks, I was giving him twenty hours a week for work of a sensitive nature. His term, not mine.
The first job, I’d been asked to find out if there was any truth to the rumors of a Green Man who might be living in Alabama—he had a locale and a few names; he wanted me to look around and see what I thought. I’d also been asked to talk to the families of a couple missing NHs while in the area. Missing non-humans was why I’d taken the damn job to begin with.
Missing people. He had connections.
There weren’t many who had more connections than the President of the United States of America, after all.
When I’d told him I didn’t see the connection between a possible Green Man and the disappearances, he’d pointed out that a Green Man would have ways of seeing things happening in nature that I could never see.
Well…true enough.
But if there was something weirder than a shifter in those decaying woods, then I hadn’t felt it.
My boss hadn’t seemed bothered when I’d been unsuccessful. But I hadn’t wanted to tell him I’d found a dryad’s tree…and no dryad.
Right now, though, I wanted even less to tell him I’d found the dryad.
“The wind told you it was time?” Raking her up and down with a look, I shook my head. “What else is the wind telling you to do?”
“The wind tells me to do nothing.” A serene smile curled her lips as she plucked off another leaf. This time, when it shriveled and faded, sheseemed to fade a little more, too.
Oh, shit.
“Is that from your tree?” I asked softly.
“Yes. All that is left, all that is living.” She plucked another leaf. “Once it is gone...”
“So why are you killing it?”
“Because unlike Albus, I am not strong. I cannot stand up to pain and torture. Even cutting down a single tree would break me, and he has much more in mind than cutting down trees.”
Abruptly, she wrenched a handful of leaves, four, five, six… Dust blew around me and I rushed to her as she swayed, then staggered. She felt lighter than air as I eased her down. Her skin felt like the smooth bark on a young tree. “What are you talking about?”
She just shook her head. “It’s been a long time coming. This…this is best. I’ll see Albus soon.”
She tried to fumble a few more leaves off but her hands shook too much.
“Please.” She looked at me.
My phone rang.
She continued to watch me with those calm, patient eyes. Patient, solid. Like an oak.
I took the branch and stripped the remaining leaves off as the phone rang again.
By the third ring, she was withering away, turning to nothing but dust and ash that blew away in the soft, chilly fall breeze.
I answered the fourth ring.
“Ms. Colbana, I was calling for an update.”
“I found her.” Dragging a finger through the dust, I rose to my feet and stared down. Even the branch was gone. “She’s dead, sir.”

“He’s pissed.”
Shanelle Maguire was a beautiful bitch and she delivered the words in a stark voice as she dropped into the chair across from my desk.
“I gathered that.” I’d just finish talking to him myself. Whitmore was a pain in the ass. “Did he send you here to snarl and snap at me in hopes of making me do better?”
She snorted. “Like that’d do any good.” She skimmed her hands back over her hair in what I’d come to realize was a nervous habit. Beautiful bitch or not, I’d come to sort of like her over the past ten days. She was blunt and didn’t hold back the truth, something I could definitely appreciate. She was also manipulative as hell—something I less appreciated—but she knew how to make things happen. “Look, I was standing out—”
“This is my shocked face.”
“Shut up,” she said, sighing in annoyance. “I heard you explaining what happened. What were you going to do? She wanted to die. Although…wow. Picking leaves off a tree branch—that’s crazy.”
“Dryads have a connection to their chosen trees.” I shrugged and thought of the forest giant I’d gone back to look at before returning home. It hadn’t turned to dust, but it was dead. It had been an oddity, standing there in the middle of the forest where so many trees had already gone brilliantly orange and yellow, but its leaves had been green…mostly. Some, though, had been going brown. Not yellow or orange, the way you’d think.
But brown.
All the leaves had been gone the second time I saw it and the branches hung despondent, as if the tree’s strength had simply drained out of it with the life of the dryad gone. I’d touched the bark and it had crumbled under the light pressure.
A few storms, a few hard rains, and it would come crashing down.
“So she just lay there, plucked the last few leaves and died, huh?” Shanelle wasn’t even looking at me. She was staring off at nothing, looking about as tired as I felt—although I doubted it was for the same reason.
“Faded into dust,” I said, carefully dancing around the fact that I wasn’t telling the complete truth. I’d had to do the same with Whitmore, but for some reason, I was reluctant to explain that I had been the one to strip away those few remaining leaves.
Whitmore had really wanted to talk to that dryad.
My gut was all twisted and hot as I remembered what she had said.
“Because unlike Albus, I am not strong. I cannot stand up to pain and torture. Even cutting down a single tree would break me and he has much more in mind than cutting down trees.”
Who was Albus?
Who was the he she’d been referring to? I had a bad feeling it might be my client—but there was no way I could even try to figure that out without questioning him; everything in me was saying Don’t…
I thought of asking Shanelle, probing gently. I knew how to dance around things and be subtle. It wasn’t my greatest skill, but I could do it.
While I was debating, though, the door swung open.
The sight of the man standing there was enough to distract me, though.
“Justin...”
I hurtled across the room and caught him up in a hug so hard, he was laughing and wheezing at the same time. “Careful there, Kit…I break.”
I didn’t care. “You’re awake.”
“Seems that way. Although if you keep squeezing the life out of me...”
Two weeks ago, Justin had almost died. The first week, he’d been in a coma. He’d started to stir, but another friend of ours, Colleen had used her healing to put him back under.
“The swelling in his brain has gone down, but there’s still a lot of healing to do—the area of the brain that controls magic has been heavily damaged and the longer he rests, the more likely it will be that he’ll regain full control.”
We’d agreed. He needed to stay asleep for a bit longer, but Colleen could only hold him for a few more days before she had to bring him back.
“I didn’t know she was letting you up today.”
He patted my back when I sniffed.
Absently, I’d realized Shanelle had left and I still needed to talk to her. But that could wait.

Email ThisBlogThis!Share to TwitterShare to FacebookShare to Pinterest
Labels: @shilohwalker