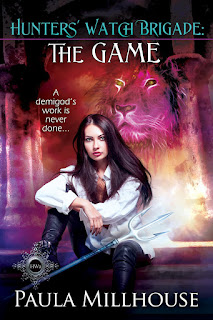 Crystal: Today I have the pleasure of hosting Paula Millhouse today! Welcome, Paula! I'm so excited to have you here today!

Paula: Hi Crystal! Thank you for hosting me on your blog today during the frenzy of release week for my new novel. So nice to meet everyone. Big cyber waves all around.

Crystal:  Would you share a little bit about yourself with us today?

Paula: I’m Paula Millhouse, and I write stories where fantasy, romance, and suspense collide. My latest release, Hunters’ Watch Brigade: The Game released June 15th, and I’m super-thrilled to share the novel with readers. It’s an urban fantasy with strong paranormal romance elements. I wrote it for readers who like a little magic and adventure mixed in with their romances.

Paula: Thank you for asking. In this scene, my main characters Samantha and Max have rounded up a pack of poisonous rats in the New York Museum of National History. Max is dealing with his family’s curse.

“I’m going in.” Sam tested the bounds of the barrier with the forked end of Atlantis. Then she disappeared inside. A misty fog emanated from the trident and surrounded her. Max couldn’t see anything. The agents all reared back, various expressions of concern on their faces.
Bolts of lightning illuminated inside the shield, and one ear-shattering boom of thunder deafened him. Max lost control, the shield disappeared, and he fell back onto his ass, striking his head on the cool marble tile. “Ahhh!” He curled onto his side into a fetal position. “Not again!”
Pure molten magic raced through his veins. The price of overusing the magic riveted him to the floor, and he shook with the force. Damn this curse. Would he ever get used to this searing pain? His body contorted, and he shifted halfway back to his native form—a thirty-five-pound Maine Coon cat—but not all the way.
“Max!” Sam was suddenly there, shaking his shoulders, touching him, saying his name. “Max! Wake up! Baby, are you okay?”
His mother had told him that if he chose to shift, his path would not be an easy one. But it was all worth it to hear Sam calling his name. Blinding pain seared up his spine. The sheer torture fed around in his head, like a hungry creature that wanted to put his eyes out. The burning of the transformation flashed through his lungs, stealing his breath, throwing him into a coughing fit. But as long as she was okay, things were right in his world.
Her touch calmed him. He’d do anything to protect her, because that was the calling he’d chosen. He’d even given up one of his nine lives to save her. That’s how much he loved Sam. He was a demigod’s guardian, all the way down to his unique strands of DNA. It was what it was.

Paula: Everyone’s playing games on their smartphones these days. Seems like no one ever talks to anyone anymore, right? That bothers me in real life. So, I wondered what would happen if someone designed a game app that got totally out of control and affected a massive amount of people. Sam and Max have tons of challenges to face in The Game, which turns into a paranormal scavenger hunt in New York City.

Paula: I appreciate you asking, Crystal. I’m working on the third book in the Hunters’ Watch Brigade series which is due out later this year. Sam and Max and all the characters in their universe have more stories to tell, and I’m writing them as fast as I can.

Paula: Since I have an evil day job, I get up three hours early in order to write. I’m fresher after rest, so that’s when my imagination kicks in. I set a timer and write in sprints, my favorite way to get tons of words on the page. I listen to movie instrumentals or brainwave power music to get into the scenes with Sam and Max, and the agents of the Hunters’ Watch Brigade.

Paula: Great question, Crystal. The Game required tons of research! From a trip to Manhattan for RWA 2015, several trips to my local library, and wide internet searches this book is heavy with travel facts.
Fascinating Fact: Zeus, who makes an appearance in The Game, is known as the patron god of hospitality.
Oh, and one more! The Statue of Liberty was originally intended to be a Lighthouse. How cool is that?

Paula: Bonnie Gill writes humorous paranormal romances about Cryptid hunters in her L.A.M.P.S. series. Jeanienne Frost and her Cat and Bones series. Suzanne Johnson, D. B. Reynolds, and Deborah Harkness, to name a few. I also like Steven James, who writes multiple POV thrillers. Oh, and of course, Jude Deveraux. There’s so many!

Paula: Sometimes I think the challenge of Historical Paranormal Romance might be fun.

Thank you so much for having me here today, Crystal! It’s been fun chatting and celebrating release week for Hunters’ Watch Brigade: The Game. I hope your readers join in on the scavenger hunt and go grab themselves a copy of the book today.


About Hunters’ Watch Brigade: The Game:

A demigod’s work is never done…

All monster hunter Samantha Silverton wants is a little R&R. She and her sexy partner, cat shifter Max, have a week off in the city that never sleeps, and she intends to enjoy it. But before she can unpack her suitcase, she’s caught up in the middle of a wicked game—a smartphone app driven scavenger hunt that’s bringing all the big, bad Supernaturals to NYC to play. The bad part? The game was the brainchild of Alex Van Dam—Sam’s first love. What’s worse? She has to play alone.
Maximillion Ra hasn’t quite got a handle on his unique shifter magic yet. He’s in love with Sam, but if he’s ever going to be any good to her, he has to face his family’s curse. But how can he leave Sam now, especially with her old flame in the picture?
Alex Van Dam isn’t interested in who wins his game. He just wants to find the final prize—an ancient Greek relic. Once he has it, he’ll use the artifact’s magic to control all the Supernaturals in Manhattan, starting with the Hunters’ Watch Brigade.
Only Sam stands in his way. And without Max by her side, even the monster hunting daughter of Poseidon has to wonder if she stands a chance...


~*~*~*~*~*~*~
About the Author:
Paula Millhouse was born and raised in Savannah, Georgia, where Spanish moss whispers tales in breezes from the Atlantic Ocean to her soul. As a child, she soaked in the sunshine and heritage of cobblestones, pirate lore, and stories steeped in savory mysteries of the South.

She lives in the mountains now, but honors her Southern heritage as a story teller by sharing high-heat adventures with her readers. Escape your daily routine with books where justice does exist, true love is worth fighting for, and happily ever afters are expected.

Posted by Reviews By Crystal at 3:44 AM