Nicholas Fillmore will be awarding a $10 Amazon/BN GC to a randomly drawn winner via rafflecopter during the tour. Please use the Rafflecopter below to enter. Remember you may increase your chances of winning by visiting the other tour stops. You may find those locations here.

Crystal: Today I have the pleasure of hosting Nicholas Fillmore. Welcome, Nicholas! Would you share a little bit about yourself with us today?

Nicholas: I’m trying to make the transition from 16 to 56; I think my wife would agree.

Nicholas: Well, I like the arrest scene in my book because there are a couple conversations going on at once: the agents trying to flip me; me (I call it a “superfluous calculus” in the book) frantically trying to figure out who knows what and who told whom.

Nicholas: I’m working on something called Sins of Our Fathers. Am about a hundred pages in… and sensing an immanent, violent editorial intervention to impose a clearer dramatic structure….

Nicholas: I had to look up “cocksucker” in German, for instance. (It’s Schwanzlutscher, btw.)

Nicholas: Golly, everything from Chandler to Rilke, Wodehouse to Camus. It has to have style.

Nicholas: I started Smuggler as a screenplay but pretty quickly abandoned it, realizing all the inner dialog that I needed to convey. But I would like to try to work purely in dialog. I like some of the dialog in Smuggler, but nothing sustained. 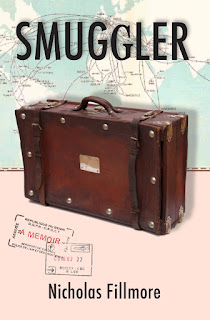 When twenty-something post-grad Nick Fillmore discovers the zine he’s been recruited to edit is a front for drug profits, he begins a dangerous flirtation with an international heroin smuggling operation and in a matter of months finds himself on a fast ride he doesn’t know how to get off of.
After a bag goes missing in an airport transit lounge he is summoned to West Africa to take a voodoo oath with Nigerian mafia. Bound to drug boss Alhaji, he returns to Europe to put the job right, but in Chicago O’Hare customs agents “blitz” the plane and a courier is arrested.
Thus begins a harried yearlong effort to elude the Feds, prison and a looming existential dead end…. Smuggler relates the real events behind OITNB.
GENRE: Memoir/True Crime

~*~*~*~*~*~
Excerpt:
Later that afternoon I walked, drunk, through the Musee d’Arte Moderne in Brussels, down a winding white hallway to some inner recess. In a corner, behind glass, a little ventriloquist’s dummy in baggy pants and jacket sat before a brass bell. For minutes on end he just sat there with his feet sticking out in front of him, like he’d been knocked down in the street. Then something seemed to stir inside him and the doll’s torso jerked forward an inch and its metal head—bang! struck the bell producing an unexpectedly bright peal like the bell of a steamship. A little placard read, “Attempt to Raise Hell.” Dennis Oppenheim. American.
A small group waited in anticipation for it to happen again. Just as a couple turned to walk away, bang! the bell clanged again. I stayed for another half hour listening to the intermittent clanging; the little brute kept at it, as if he had a mind of his own—as if, in spite of whatever wind-up mechanism controlled him, he was determined to carry out this errand he alone knew the meaning of.

Nicholas Fillmore attended the graduate writing program at University of New Hampshire. He was a finalist for the Juniper Prize in poetry and co-founded and published SQUiD magazine in Provincetown, MA. He is currently at work on Sins of Our Fathers, a family romance and works as a reporter and lecturer in English. He lives on windward Oahu with his wife, his daughter and three dogs.
Author website: http://www.nicholasfillmore.com
Publisher Website http://www.iambicbooks.com
https://www.facebook.com/Nicholas.Fillmore.10/
https://twitter.com/nicholasfillmor

a Rafflecopter giveaway
Posted by Reviews By Crystal at 4:28 AM