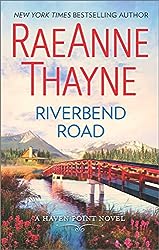 Return to Haven Point, where New York Times bestselling author RaeAnne Thayne proves there's no sweeter place to fall in love… Protecting the streets of Haven Point isn't just a job for police officer Wyn Bailey, it's a family tradition. But lately she's found herself wanting more, especially from her boss—and overprotective brother's best friend—sexy chief of police, Cade Emmett. The only problem is getting Cade to view her as more than just a little sister. Cade's hands-off approach with Wyn isn't from lack of attraction. But his complicated past has forced him to conceal his desire. When Wyn is harmed in the line of duty, Cade realizes the depth of his feelings, but can he let his guard down long enough to embrace the love he secretly craves?

She made it only a few steps out of the burning structure into the blessedly sweet air and blinding sunlight before strong hands reached to take both boys.
“Careful of Caleb’s leg. I think it’s broken,” she mumbled, not even sure who was helping her and very much afraid she was going to be sick now from a combination of the smoke choking her lungs, the exertion and delayed reaction.
“We’ve got to move, before the whole thing tumbles down around us.” As her vision adjusted to the shift in light, she saw Cade, his face set and hard, carrying both boys as if they weighed no more than a couple bags of sugar.
“You coming?” he growled.
“Right behind you, Chief,” she mumbled, then called on the last of her strength to follow Cade as he rushed away from the structure toward a cluster of emergency vehicles just arriving on scene.
He headed straight for the ambulance pulling in just behind the first water truck. Before they reached it, a couple of paramedics jumped out and grabbed a gur- ney out of the back. They were two of the best in the volunteer department, she saw with relief. In seconds, Ed Cutler had Caleb on the stretcher.
“I didn’t have much time to assess the situation but it looked like he broke his ankle. He jumped out of the hayloft once the fire started,” Wyn explained, keep- ing a careful eye on Ed’s partner Terri Michaels as she hooked Luke up with an oxygen mask.
“Thanks. Sit down before you fall over,” the bald EMT ordered her. “Terri, get a mask on Wyn here too.” “I’m okay,” she said. “Don’t worry about me. You’ve got enough on your hands with the boys. They come
first.”
“You’re going to let them treat you,” Cade growled. “And then you’re going to explain to me why the hell you thought you could defy a direct order.”
The paramedics exchanged glances and then pointedly busied themselves with Lucas and Caleb.
“I had no choice. You can see how quickly that thing flared out of control. When I rolled up, only the loft was engulfed but I knew it was only a matter of time. If I hadn’t gone in, Chief Gallegos would be sending his guys in for body retrieval and we both know it!”
“Another ten seconds and they would have been looking for three bodies!”
Though the June afternoon sunshine was warm and the fire put out plenty of heat, Wyn shivered. As her adrenaline spike ebbed, the reality of the situation began to soak in like that water spraying out of the firefighters’ hose.
In five years of law enforcement, she’d never had such a close call. She and the boys all could have died inside that fiery barn. If she had been thirty seconds later…if she hadn’t been able to move as quickly…if one of those blazing timbers had crashed to the ground.
No question about it, they had been lucky.
She swallowed, suddenly light-headed. She didn’t realize she swayed until Cade grabbed her.
“Sit down,” he ordered harshly, though his hands were gentle as he helped her to the ground. Terri came over with an oxygen mask and a water bottle.
“Did you call another ambulance for her yet?” Cade asked.
Terri looked wary at his clipped tone. “No. We’ll check her blood gases first. Could be, we can treat and release at the scene with a few more puffs of oxygen.” “I’m perfectly fine,” Wyn answered through the mask, then spoiled the words with a paroxysm of cough-
ing.
When Wyn finished, Cade’s silver-blue eyes looked as fierce and hard as the Redemption Mountains.
“If the paramedics don’t ship you to the hospital, take your vehicle and clear out. You’re officially sus- pended without pay for the next seven days.”
For a moment, she thought the fire had messed with her hearing. “What? I just saved two lives!”
“And almost lost your own in the process.”
She glared at him. “You can’t suspend me! I didn’t do anything wrong!”
“You disobeyed a direct order and your actions could have endangered others.”
“How?” she demanded.
“You turned off your radio, didn’t you? You had no idea what the status of the other responding personnel might have been. Nor did we have anybody on scene to provide status reports on the fire until the first engine rolled up.”
She had no answer to that, especially not when he reached down and unclipped her radio from her shoulder. When he turned the dial up the air was immediately filled with voices and static as Chief Gallegos and his team communicated through the airwaves with dispatch about their needs.
“I made a judgment call,” she said. It sounded weak, even to her. Okay, maybe she had ignored department policy, but those two boys chattering to the EMTs were proof that her judgment call had paid off.
“The wrong one. I’ll see you in seven days,” he answered tersely, then turned and stalked over to the fire command center.

Cade had never been more angry.
The fury prowled through him, harsh and wild like the fire burning through Darwin Twitchell’s dilapidated barn.
He had to be able to trust her to do exactly what he asked. Out of all six officers in this small ragtag Haven Point police department, he trusted Wynona most. She was smart, hardworking, compassionate and insightful.
She had natural instincts and seemed to always find the perfect way to allay any tense situation, from drunk altercations down at the Mad Dog tavern to hot tem- pers between neighbors.
He figured she came by those instincts naturally, since she was fourth-generation law enforcement in these parts.
He didn’t want to suspend her, especially not when they were in the middle of their busiest time of the year with the summer tourist season heading into full swing. But what alternative did he have? This wasn’t the first time she had ignored his orders but he vowed it would be the last. He wasn’t a control freak but he had to know that his officers would follow the chain of command.
He glanced back at the ambulance. She looked so fragile and vulnerable sitting there in the grass, her cheek sooty and strands of wheat-colored hair slip- ping free of the thick braid she always wore on duty.
Beneath his anger lurked something else, something he didn’t want to look at too closely. He only knew that he couldn’t remember ever feeling that bone-deep fear that had sent him racing out of the station to his vehicle and then bulleting through town to the fire scene.
She was a police officer. One of his police officers. He would have worried about any of his guys who stopped responding while out on a call.
He put it away when he saw Erik Gallegos heading in his direction.

New York Times and USA Today bestselling author RaeAnne Thayne has written nearly fifty books for HQN, Special Edition, Intimate Moments/Romantic Suspense and Bantam Loveswept. A six-time RITA nominee, RaeAnne has received a career achievement award from Romantic Times for series romantic adventure, as well as a Pioneer of Romance award and two RT Reviewers’ Choice awards for best Special Edition. She finds inspiration from the beautiful mountains of northern Utah, where she lives with her family. Her books have been described as “poignant and sweet,” with “beautiful, honest storytelling (that) goes straight to the heart.” -