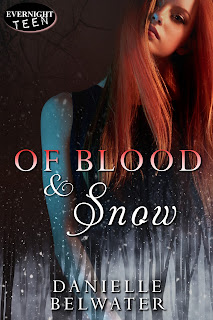 Blood is thicker than water, or so the story goes…


As fast as Cora can run, there is no escaping the blood that ties her to an ancient, evil past.


Amongst the bitter cold and driving snow, Nate must find a way to protect the love of his life, before the darkness falls and Cora is lost to him forever.

Crystal: Today I have the pleasure of hosting Danielle Belwater. Welcome Danielle! I'm so excited to have you here with us today. 1. Would you share a little bit about yourself with us today?

Danielle: I always find this one of the most difficult questions of all. Who am I? Like a lot of people I struggle talking about myself. When I’m not writing, I’m spending time with my family or decorating cakes. I love being creative in a totally different media.

Danielle: One of my favourite scenes is where Cora is discovering her power and experimenting late one night when Nate discovers her. It shows not only Cora’s vulnerability but Nate’s unwavering faith in her no matter the situation.

“Shh.” Cora opened her eyes and squinted, focusing all her attention on the air above her hands. The shimmering glow had returned. Her veins darkened, resembling roads on a map. A wisp of silver smoke curled upward, forming a small cloud, swirling an inch above the cup. Tiny crystals had formed at the base of the mug and blossomed over the entire cup leaving it coated in a thin icy white film. I shook my head and blinked. Cora took her fingers away from the cup and shoved her hands back into the relative safety of her lap.
Cora nodded toward the object on the table, giving me the okay. I reached out and touched it. It clinked and steam no longer rose from its contents. I wrapped my fingers around the outside and picked it up. The freezing cold shocked me and the mug fell from my hands and onto the table with a loud clunk. The coffee had frozen into a solid block. I tapped the surface. Yep, coffee popsicle.
“How did you do that?” I picked it up again and looked at it from every angle. Cora put her hands on the table and shrugged.
“I’ve no idea.”
“Does this have anything to do with the dreams you’ve been having?” The memory of Cora sitting on the floor, clutching her arm came back to me. She claimed it had been a dream. I wasn’t convinced.
“I don’t know.” Cora looked away but I didn’t miss the pink flush rise in her cheeks.
I leaned toward her, picking up her hands between my own and breathed warm air into them. They were frozen.
“What’s going on, Cora? Talk to me.” I pleaded. She lifted her head but didn’t speak. “Cora, this is me. Do you seriously think that little of me? That I would judge you?”
The muscles in her jaw tightened and she flinched. “No, that’s not… No. Ugh.” She diverted her gaze to a drop of spilled coffee on the table. I cupped her chin in my hand and turned her face toward mine, making sure she couldn’t look away.
“Cora. I’ve just watched you take iced coffee to a whole new level, and while the notion of instant iced beverages excites me I think there is perhaps something a little bit deeper going on.”
The tightness in Cora’s face eased and she released her bottom lip from between her teeth and it went from white to a kissable rose pink. I couldn’t resist and brought my lips to hers but got a mouthful of hair instead.
“Don’t.” I turned her head back to face me. This time when I kissed her, she didn’t pull away. “Tell me.”
“I don’t know where to start.”
“Try the beginning.” I squeezed her hand.
After a minute of silence she finally spoke. “At first, I couldn’t control it. Stuff would just, you know, happen. If I was upset or angry. Now I can make things change on purpose.” She blew out the breath she had been holding as if she’d just confessed to grand theft auto.
“See, that wasn’t so hard, was it?” I couldn’t let her see my amazement at what she’d done. She was clearly having a hard enough time dealing with this as it was.
“I just don’t understand why you didn’t think you could talk to me about it.” Cora avoided making eye contact with me, instead, scratching at her cuticles.
“Is there something wrong with me?”
I couldn’t believe what I was hearing.
“There is absolutely, positively nothing wrong with you.” She could grow another head and I’d still think she was the most beautiful person I’d ever seen. “Granted, some answers would be nice, but I have no doubt that you are now, and will always be, perfect.”

Danielle: After book 1, Of Fire & Roses was released, it was clear to me that Nate and Cora still had a long way to go.
While writing Of Blood & Snow, I think I must have watched the first four seasons of The Walking Dead maybe five or six times, at least!  The characters are intriguing and I found myself doing a lot of philosophizing about not necessarily a Zombie Apocalypse but what people do in times of seemingly endless crisis. Would you be a survivor? Or would the situation prove your downfall? I have tried to adapt some of these concepts and put my characters in similar situations to see how they would react. Not to mention stick in a bunch of hidden Walking Dead references!

Danielle: Currently, Book 3 (which is yet untitled) is in the works, which will take our intrepid band a long way from home and introduces a new main character who will send them all into a tailspin! I can’t say much more, not because I don’t want to, but because I haven’t written it yet!

Danielle: When you have 2 young kids, 2 jobs, a husband and house that needs a clean from time to time I don’t have the luxury of a routine. Usually, once the kids are in bed, and I have done all the daily grind I try and get at least 1000 words out a day. Not that it happens!

Danielle: I had to do a fair bit of research on the area, it’s climate, especially in Winter, and make sure that I keep my locations as true to reality as possible. It was important to me to put every day people and places in a totally unreal situation.

Danielle: I adore Juliet Marillier. She has been my favourite author since I first picked up Daughter of the Forest 12 years ago. But I love reading books by new and established authors no matter the genre. I’ve been digging Dr Seuss lately.

Danielle: I never thought I’d say it, but I’d like to try something out of the romance genre- gasp! After reading Paula Hawkins – Girl On The Train and Hannah Kent’s – Burial Rites, I’ve got an urge to write something a little darker and perhaps a bit out of my comfort zone.

Why? Why did I need to go home? Other than for shelter, no one needed me there. Nate was all I had left. He was my reason for breathing and now the sole reason I got up
every morning. The thought of harm coming to Nate made my heart hammer in my
chest even harder. I jammed my hands deep into my coat pockets and focused on
letting oxygen flow into my lungs.

In a single moment of clarity, I knew. I mean, I knew I loved Nate; that was without
question. But if I didn’t have him in my life, it would be nothing but vacuous space.

I brushed snow off the fallen tree trunk and sat down. My thinking tree. Nate and I came
here often to sit and talk, read, or watch the day simply pass us by. I piled up handful after handful of snow, heaping them on top of each other until a small avalanche rolled off the log and into a heap on the ground.

You are the key.

I leapt off the log landing two feet together, crushing the peak of snow beneath my shoes.

“Who’s there?” I shoved my fists into my hips and squared my shoulders. If there was
someone there, they didn’t know who they were messing with.

The rustling of leaves came from above and a sprinkling of disturbed snow flittered down in
front of my face. The flapping of beating wings and the call of a solitary bird echoed overhead. I caught sight of white feathers tipped with black before they disappeared above the trees and out of sight.

“Is anyone there?” I called out again, but I had a feeling I wouldn’t get a response.
The softness of the voice rolled around my head as I lingered amongst the tall trees on my
way back home.

I am the key. The answer is within my blood. What did that mean? 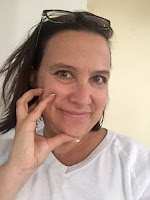 Danielle Belwater adores the concept of true love and that everyone has their Prince
Charming or Snow White out there somewhere, even if they have to fight demons,
ghosts, and wizards to find it.

Danielle has been having a love affair with words since she was young and in primary
school, writing some rather imaginative tales. This love has followed her into
adulthood.

She lives in rural South Australia with her husband, young daughters and way too many animals to mention. She spends most of her time dreaming up characters,
stories, ghostly tales, and watching Firefly re-runs.  She also cooks the odd meal for her family to avoid them looking like skeletons at official author functions!

Danielle is passionate about reading and her interests include pretty much anything with words from rolling four volume epics to the daily newspaper.