Crystal: Today I have the pleasure of hosting Marie Lavender. Welcome Marie! I am so excited to have you here today.Would you share a little bit about yourself with us today?

Marie: I am from the Midwest, from a pretty small town in Indiana. I have two cats, but I will likely have so many more once my fiancé and I live together (we’re cat people). I’ve been writing stories since I was nine years old, but before that point, they just played out in my head. I think I always wanted to be a published writer, to see my name on a book in a store or something. Not for fame or anything, but to be proud that I did, in fact, get there. That I touched lives somehow. I hope I have with my work.

I love beautiful scenery, and I hope to one day live in a beachside home with the love of my life. I am a fanatic online shopper, and it’s my dream to make it to Ireland to get it in touch with my roots one of these days.

Marie: I’ve been working on a romantic comedy, Chasing Ginger, which will be book one of The Misfits Series, a six-book set of tales about a group of zany friends and their romantic misadventures.

Marie: My latest release is a paranormal romance/urban fantasy with a slightly futuristic angle. The novel is titled Blood Instincts, which is book two of the Blood at First Sight Series. I always planned to write the sequel to Second Nature, but when I was finally ready to focus on the story, the heroine Myah grabbed me and wouldn’t let go. It was so compelling to tell her tale, to wonder…what if you found out something really crazy about yourself, about your family even, something that didn’t make sense in the real world? How might you handle it? So, that’s where I took the story, and it turned out well!

Crystal: Do you have a favorite snack that you like to munch on while writing? If so, would you mind sharing what it is with us?

Marie: I can never say no to a piece of dark chocolate. Plus, I don’t mind pairing it with pretzels.

Marie: Sure! I love the moment when Oliver corners Myah. So sexy…it reminds me of that first kiss most of us experience, with a bit of the paranormal thrown in.

A chill ran down her spine. She removed her hands from her pockets and crossed her arms over her chest, glancing away.
“Cold? I could warm you, you know.”
She jumped, and realized he now stood right in front of her. She noticed the trunk was closed. He wasn’t kidding about his speed. And that fantastic spiced cologne was drugging her mind. She had to curb the urge to get closer. “Ah, thank you for the offer, but I think it’s best we don’t—”
“A curious thing, to be sure. Why do you deny yourself, Myah?”
She saw his white teeth flash in the dim lights of the parking space. “Deny…what?”
“Why deny what you clearly want?” He leaned forward, nipping her mouth with his fang. As blood welled over her lower lip, he sucked on it. A part of her was somehow aware he sealed the wound at the same time he created it. How was that possible? Tingles began in a place where they shouldn’t be. Oh God, why was he doing this to her?
He growled, “Mmm…an ambrosia unlike any other. Do you know how sweet you taste?”
She shivered. This time, it wasn’t from the weather. It took every ounce of resolve to keep from leaning into his body.
“I remember when we kissed. Now I wonder how you taste everywhere else. Only in my dreams have I imagined it.”
She felt lightheaded, like this was a fantasy she should wake from but couldn’t. “Please,” she whispered. “We really shouldn’t.”
“I know you want this, Myah.”
Swallowing hard, she shook her head. “No. I promise you I don’t.”
His eyes flashed, with anger this time. “You’re lying. I smell your arousal, sweetheart.” How was it even possible? These pet names of his might be insults after all. She managed, “J-just because we, uh, we had one date and shared a kiss doesn’t mean—” “No, not in every case. But I’m right, yes?” He all but crowded her against the car, then glanced down for a split second before he looked in her eyes. “I could take you in no time, do you realize that? I might be up your skirt, have those perfect legs wrapped around me, and I’d be buried inside that sweet honey in less time than it would take for you to figure out a way to deny us both. But, here’s the thing. You won’t fight me at all. How do I know? I just do. A male knows when a woman wants him. A vampire’s sense of smell is stronger than you can imagine. It’s a disadvantage sometimes. Now? It tells me you want what I can give to you…”
Oliver cocked his head for a moment. “Besides, I distinctly remember you inviting me into your place, right? That wasn’t a lie.”
She trembled. God help her, her body grew warm at the taunting tone, his nearness a drug. He smelled delicious, exotic with a hint of spice and a scent like oranges. She thought it must be the most potent aphrodisiac on the planet.
“Don’t pretend you’re not feeling something.”
His voice was deep, low, and unbelievably hypnotic. After a moment, she realized she’d leaned toward him, as if desperate for a kiss. She forced herself to snap out of it. Except that was when he wrapped an arm around her and drew her breasts up to his chest. His large, hard body consumed her.
“Myah, look at me. No…look at me.”
She gazed in his blue eyes, unable to glance away for composure.
“You know I’d never hurt you. I can’t. You must know the truth by now. But, this force will draw us together regardless of what happens. Don’t you realize I would give anything to kiss you again, to touch you, to taste you? Everywhere?”
She whimpered as his mouth hovered over hers. She could almost taste him, a dark and minty scent. Why was it so hard to turn away from this man…vampire? He was right about her wanting him. She probably wouldn’t fight him at all if he made a move.

Marie: I read romance novels, listen to music, and watch TV shows or movies. I’m also currently on a kick where I play phone apps in my free time. I do Words with Friends, or enjoy playing Mahjongg or hidden object games.

Marie: Mostly, I write in silence, unless the scene requires music to set the mood. For historical stories, sometimes I’ll play music from the time period. Or, in the case of modern tales, I’ll listen to music that the character likes.

Marie: Thanks so much for inviting me! Readers can find out more about me on my official author website, subscribe to my three blogs, connect with me on Twitter, Facebook or Google+, or join my monthly newsletter for updates. 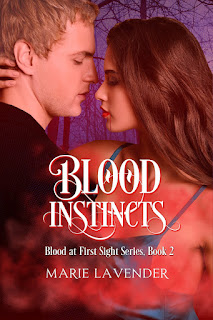 What if you found out that you weren’t exactly…human?

Enter the Other World at your own risk…
What if you found out that you weren’t exactly…human?
Myah Sullivan is suddenly living that nightmare. There are Others in the world, dangerous, supernatural creatures that make her mind spin and cause her to question the reality she’s always known.

Oliver King is her savior, a vampire who tries to show her the way. Through her journey she learns far more than she ever thought she would about herself, and about the past. Soon, she discovers that there is so much more to meeting Oliver than mere happenstance.

Can Myah accept her new reality, or will she retreat into that normal, safe world she once thought was her own? 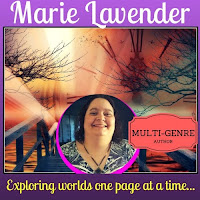 Multi-genre author of Victorian romance, UPON YOUR RETURN, and 23 other books. UPON YOUR LOVE and THE MISSING PIECE placed in the TOP 10 on the 2017 P&E Readers' Poll. DIRECTIONS OF THE HEART was nominated for the 2017 Reader's Choice Awards. The I Love Romance Blog became a finalist in StartDating DK's Romance Blog Awards of 2017. ILRB landed on Feedspot’s 2017 TOP 100 Novel Blogs and TOP 100 Romance Blogs. DIRECTIONS OF THE HEART placed in the TOP 10 Books of 2017 on Amy’s Bookshelf Reviews blog. TOP 20 Authors of 2017 on Amy’s Bookshelf Reviews blog. Mystery Blogger Award for 2017. A to Z Blog Challenge Survivor in 2016. March 2016 Empress of the Universe title - winner of the "Broken Heart" themed contest and the "I Love You" themed contest on Poetry Universe. SECOND CHANCE HEART and A LITTLE MAGICK placed in the TOP 10 on the 2015 P&E Readers' Poll. Nominated in the TRR Readers' Choice Awards for Winter 2015. Poetry winner of the 2015 PnPAuthors Contest. The Versatile Blogger Award for 2015. Honorable Mention in the 2014 BTS Red Carpet Book Awards. Finalist and Runner-up in the 2014 MARSocial's Author of the Year Competition. Honorable mention in the January 2014 Reader's Choice Award. Liebster Blogger Award for 2013, 2014 and 2016. 2013 and 2014 Amazon Bestseller Ranking for UPON YOUR RETURN. Top 10 Authors on AuthorsDB.com. Winner of the Great One Liners Contest on the Directory of Published Authors.

Marie Lavender lives in the Midwest with her family and three cats. She has been writing for a little over twenty-five years. She has more works in progress than she can count on two hands. Since 2010, Marie has published 24 books in the genres of historical romance, contemporary romance, romantic suspense, paranormal romance, dramatic fiction, fantasy, science fiction, mystery/thriller, literary fiction and poetry. She has also contributed to several anthologies. Her current published series are The Heiresses in Love Series, The Eternal Hearts Series, The Magick Series, The Code of Endhivar Series and The Blood at First Sight Series.