HAPPY BOOK BIRTHDAY TO
ASYA IN THE TILT OF THE WORLD! 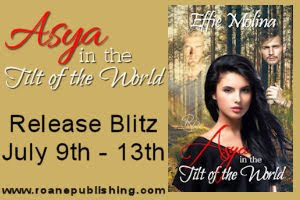 Asya Hart’s simple human existence ends forever the night she meets Christian and James, two beautiful vampires bonded to each other and united in their mission to find The One who is destined to Balance the Tilt of the World—in other words, heal humanity and the planet. When Asya is compelled to use a healing power she never knew she possessed on the Grandfather of the Blood Community, Christian and James are commanded to bring Asya into The Blood, and the prophecy is set in motion.

Asya learns that she and the rest of her family are all vampires, and that it wasn’t until her blood was raised that she became her full self. Asya is destined to save humanity, but she has no idea how she is supposed to do that! As if the expectations on her aren't daunting enough, she finds herself hunted, an unwelcome symbol of change within the vampire community. Vampires lifespans are linked with humanity: the more chaos and negativity within humans, the longer vampires live. Asya finds herself in the minority, a vampire who believes that working to heal humanity is the right and necessary thing to do, despite the personal consequences. There are those who don’t appreciate Asya's selflessness, and for them the solution is simple: get rid of her before her revolutionary ideas take hold.

In the midst of it all is love, and Asya struggles to not let it distract her. Christian and James are a bonded couple, and Asya has joined them. Asya is drawn to them in ways she has never felt before, but does she really have the luxury of first love? Asya finds herself on the crossroads. Who is she is in this new world? And can she truly be who people expect her to be?

James came up behind her. Wrapping his arms around her he pulled her back against him, gently rocking her. They stood this way a moment in silence. Asya could feel her heart beat slow, gradually, until it was no longer jumping out of her chest.
Whispering in her ear he reassured her. “Don’t worry. It’ll all get worked out. You need time to learn, and they need time to get to know you.Many of these old creatures have forgotten that such a thing as innocence and naïvety exists.”
‘Naïvety,’ Asya thought to herself. “How unappealing.” She had never considered herself particularly naïve before. It occurred to her, in a tangible way for the first time, how much older Christian and James were than her. After all, they looked to be in their early twenties, so she didn’t really think of them as what they were, hundreds of years old. She thought she must seem like some flighty little girl to them. Xavier was probably right, and with good reason. Of course they’d get bored with her sooner or later.
Christian hissed through his teeth, frustrated, standing up from his chair.
James glanced back at him, questioningly, tightening his arms around Asya. “What’s the matter, baby? What’s going on in that head of yours?”
It was difficult to tell if he was directing his question at Asya, Christian, or both.
At the sound of the word baby, Asya had twisted out of James’ arms, wiping the tears away from her cheeks, irritated at herself for crying. She glared at Christian, defying him to betray her inner thoughts, knowing he probably would anyway when alone with James later. As long as it wasn’t in front of her!
It was humiliating. There was no such thing as presenting a stoic front, and getting out of a situation like this with one’s dignity, with one guy feeling your feelings and the other eavesdropping on your every thought about him!
“And it’s paradise for me, knowing how much you value Xavier’s opinions,” Christian retorted satirically.
“Listen,” James said to Christian and Asya sharply, continuing more gently when they both turned to face him. “How about one crisis at a time, okay? I’m going to go shower and head over to the society building. Do you think you two can manage to not kill each other while I’m gone?”
They both nodded at him, averting their eyes from each other.
James made contact with one, followed by the other, and each felt a wave of love, reassurance and tranquility float over them. Their shoulders relaxed slightly, their fists unclenched.
But he moved away reluctantly, as if afraid to leave them.
“I don’t know how I fell in love with two hotheads,” he told them, shaking his head, but smiling at them as he disappeared into the house.
Asya and Christian stood, frozen to their respective spots, in silence.
After several long moments, Christian sighed. He spoke in a near whisper. “I want you to trust me.” He paused a moment. “Listen, you trusting me, and James, and what the three of us have? It’s a way of trusting yourself…of trusting who you are.”
Asya looked at him. “I do trust you. Really, I do. But that’s just it, the whole knowing who you are thing… I thought I was there, but every day it seems I’m reminded—I’m not. I’m sorry. I’m doing the best I can.”
She looked down at the ground, feeling her head was so muddied and heavy it might roll off her neck.
Christian walked over to her. Taking her hands, he placed one on her heart, the other on his own, and leaned down to rest his forehead against hers. They stood a moment in quiet before he began.
“You and me, we think too much. I can hear it when you think about something involving me. You know that already. But I can sense it when you’re thinking about other things too. It’s beautiful—different colors, swirling, busy, all kinds of patterns. You know my paintings?”
Asya nodded her head slightly, letting him know she was listening.
“Well, those are James’ thoughts. I can see that about people. And you…you, Asya, are a kaleidoscope, spinning and changing all the time. I could sit for hours and watch you. You’re beautiful. I can’t wait to get to my paints, but it’s more than that. I imagine I might look similar, you know, in my head. Sometimes when I pay attention to you, I feel as if I’m paying attention to myself. Does that make any sense?”
And, oddly enough, it did. She squeezed his fingers slightly, raising her head. Her eyes met his, and they stood again in silence, looking at one another, their noses only inches apart.
“But as beautiful as it is, you and I, we think too much,” he repeated. “If there’s one thing I’ve learned from James, it’s to trust this,” he said, and pressed their hands into their hearts. “Sometimes thinking can’t solve it, not alone anyway. When it gets muddled, you’ve got to turn off your brain and feel.”

Effie Molina has words crowding her head and occasionally untangles them into stories. Effie is a multi-racial, bi-identified woman living in Western Massachusetts. Effie enjoys exploring the human condition, speaking truth to power and striving to be consistently authentic and brave. She does this best while home with the love of her life, surrounded by kids and beasts. While not writing, she’s supervising a team of child protective social workers by day and dancing in an Afro-Cuban performance group at night.


Posted by Reviews By Crystal at 2:19 AM