#ReleaseDay #SpotLight ~ When a Laird Loves a Lady By Julie Johnstone 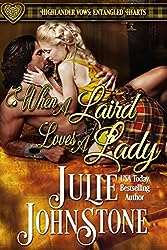 When a Laird Loves a Lady
By Julie Johnstone
Blurb:

A need to belong drives her. A longing to forget compels him. Fate may send them into each other’s arms, but only love can mend their hearts. An Outlander Raised by a tyrannical father, Marion de Lacy yearns for the comfort of belonging to a loving family. So when her father announces her betrothal to an evil knight in exchange for his help to overthrow the king, she concocts a desperate scheme to avoid the marriage: feigning her own death and then fleeing England. But when her plan goes terribly awry and she’s captured by the knight, not even her careful preparations could ready her for the Scottish barbarian who rescues her and then informs her that he’s to marry her by edict of her king. Certain her father will defy the king’s orders and wed her to the knight if she refuses the Highlander’s hand, Marion agrees to marry the strangely compelling but obstinate laird of the MacLeod clan. A Highlander After the death of his beloved wife, Iain MacLeod has no desire to marry ever again. Yet when he finds himself obliged to do so to secure the freedom of his childhood friend and king, he reluctantly travels across England to collect his unwanted bride, expecting to find a cold Englishwoman. Instead, he discovers a fiery, bold beauty who is fiercely loyal, protective of those she loves, and defies him at every turn, challenging his certainty that his heart is dead. Ensnared Following a hasty marriage and perilous journey to Scotland, Marion harbors no illusions that her new husband loves her. Still, her heart cannot resist the noble, brave warrior, and she cannot suppress the hope that she has finally found where she belongs. However, the harder she tries to fit in with the clan and gain Iain’s love, the farther away her dreams drift. Iain is more than willing to give his respect to his courageous wife—her kisses and caresses even ignite his blood and demand his passion—but he refuses to give up his heart. That is, until enemies near and far threaten to take Marion from him. Now the demons that haunt him can only be conquered by surrendering body and soul to Marion, if only it’s not too late…

A small sigh escaped Marion as she settled against Iain’s chest and laid her head back. Her dark eyelashes fanned downward to veil her eyes. He held perfectly still, wanting the moment to suspend in time. He knew from losing Catriona that savoring such moments when he was in them was wise. He closed his eyes and memorized the way Marion’s bottom curved against him, the silky feel of her skin brushing his own, and the weight and warmth of her body pressing so trustingly against his chest. Slowly, he opened his eyes and devoured the sight of her slender legs and the delicate appearance of her arms, which belied the strength she had shown when saving Bridgette.
Marion had courage, it seemed, for everything she faced. But did he?
He squeezed his eyes shut again, a single thought drilling into his brain. He had the nerve for battle, the mettle to lead his clan, the willingness to sacrifice himself to protect anyone in his care—or anyone who simply needed him—but did he have the courage to give himself to a woman fully, heart and soul, again? He didn’t know, but he suspected he’d never have all of Marion unless he offered all of himself.

Amazon Buy Link
Posted by Reviews By Crystal at 2:00 AM