#GiveAway ~ The Color of Love By Sharon Sala ~ ‎@SharonSala1 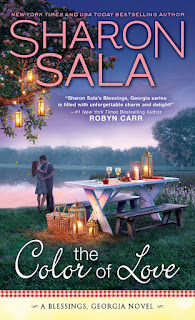 The Color of Love
By Sharon Sala

Welcome to Blessings, Georgia, the small town with a big heart! Anyone from a small town can tell you that gossip never stays quiet for long. The biggest news lately is Ruby Dye: she's been receiving gifts from a secret admirer. But Ruby isn't sure she can trust this newfound happiness. Nobody knows the dark secrets she keeps about her life before she arrived in Blessings. Is this the beginning of a would-be romance, or is she the target of something more sinister?

Everyone admires Ruby and her determination to do the right thing, especially local lawyer "Peanut" Butterman. He's finally ready to tell her how he feels. But when trouble arrives on Ruby's doorstep and their little town is threatened, Peanut may have to prove himself in ways he never imagined.