When Samantha Black shares her sandwich with a dog, his owner, Jon—a homeless man living in the Las Vegas storm tunnels—gives her a poker chip worth a fortune from the exclusive casino, Buried Pleasures. All Sam has to do is cash it in. Sam is in Vegas for one reason only—to get her friend, Evie Holt, away from sinister magician, Darian Fox, who holds her prisoner in an effort to force Sam to perform at his club, Illusions. A neon circus tent of strange and mystical acts, Illusions is one of the biggest draws in Vegas, and he’s hell-bent on including Sam in his disturbing plans.

The shadowy Magda Gardener will do anything to keep Sam from cashing in that chip. She knows that Buried Pleasures is the gate to Hades and cashing in the chip is a one-way ticket across the River Styx, which runs beneath the storm tunnels of Vegas. Jon is really Jack Graves, owner of Buried Pleasures, and Graves is really the god of death, himself, and if things aren’t already confusing enough, he and Magda know what Sam doesn’t. Sam is the last siren. That her song can kill is only the beginning of her story. Jon wants her safe on his side of the River, protected from Fox’s hideous magic. But even Death fears Magda Gardener, who is none other than Medusa, and the gorgon has her own agenda. If Sam is to understand her heritage and win the battle against Darian Fox, not only will she have to trust her heart to Death, but they’ll both have to work for the gorgon, whose connection with Sam runs deeper than any of them could imagine. 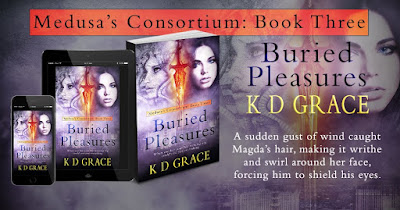 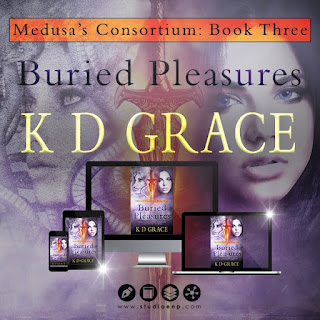 Voted ETO Best Erotic Author of 2014, K D Grace believes Freud was right. It really IS all about sex—sex and love—and that is an absolute writer’s playground.
When she’s not writing, K D is veg gardening or walking. Her creativity is directly proportional to how quickly she wears out a pair of walking boots. She loves mythology, which inspires many of her stories. She enjoys time in the gym, where she’s having a mad affair with a pair of kettle bells. Her first love is writing, but she loves reading and watching birds. She adores anything that gets her outdoors.
K D’s novels and other works are published by Totally Bound, SourceBooks, Accent Press, Harper Collins Mischief Books, Mammoth, Cleis Press, Black Lace, and others. She also writes romance under the name Grace Marshall.

Posted by Reviews By Crystal at 3:51 AM