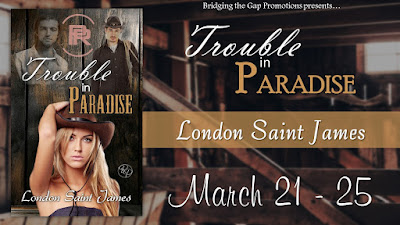 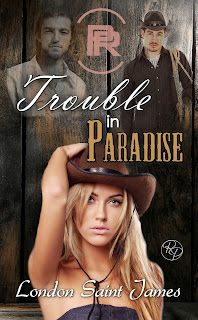 If you know what’s good for you,you’ll go back to Dallas.

Since coming home Sutton has inherited herself a heap of headaches, two bossy men who want her for their own, threatening notes, and a whole lot of trouble in Paradise.

Having Doc McNab as competition, being ten years Sutton’s senior, and under her employ, meant the deck was stacked against Flint Palmer when it came to winning
the sexy, vivacious Sutton as his woman. No way would she be interested in an old, worn-out, ex-rodeo cowboy like him, but that wasn’t going to stop the man from trying.

With the exception of the pretty as a picture, Sutton Callaway, Kale McNab’s childhood sucked. He’d been jerked up more so than raised by his ex-convict of a father, eventually leaving the girl and West Texas behind. Now, he’s all grown and back in Sutton’s life, willing to do whatever it takes to stay there.

Please Note: This is the novel length book following the introductory novella Welcome to Paradise in the Paradise Ranch Series

If you want to know a little bit more about me, you can find me on social
media, you know, Facebook, Twitter and such. Oh, and you are cordially invited
to come join my FB group Slip Between the Pages with London
where you can ask me about any of my books, or if you just want to talk about
something random such as the best way to make a horrible meatloaf, I’m your
girl. *Smiles* We have a lot of fun in that group. *Whispers conspiratorially*
Sometimes we spike the punch. Shh…Don’t tell.

London will be giving away a $10.00 Amazon Gift Card, a PDF copy of the introductory

Novella to Paradise Ranch, Welcome to Paradise, and a signed paperback copy of Trouble in Paradise to one lucky winner. To be eligible to win, enter the Rafflecopter. Giveaway runs from 3/21 to 4/4.