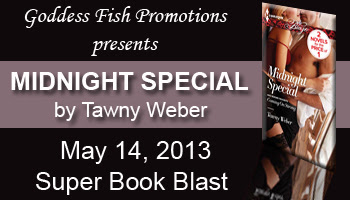 Tawny will be awarding a bookmark goodie package to one commenter at each stop (bookmark, signed cover flat, post it pad, magnet) and a grand prize of a $25 Amazon / BN GC to one randomly drawn commenter during this tour and her other Book Blast on May 9th. Check out other tour stops for more chances to win. You can find the tour schedule here...  Be sure to stop by and comment on as many stops as you would like for a better chance to win the prize. http://goddessfishpromotions.blogspot.com/2013/04/super-book-blast-2-midnight-special-by.html

Please leave a comment with your email address so we can contact the winner of the prize package.
~~~~~~~~~~~~~

Somewhere on the train is a key witness for a crime involving arson, murder and a high-profile businessman. And reporter Marni Clare will do whatever it takes to get the story—even if it means crashing in a sleeper car that’s she’s not sure she’s reserved. But when she wakes, she finds herself curled up with the man she’s seeking…and he’s hot enough to derail all her plans!
FBI special agent Hunter won’t complain about the wickedly hot blonde in his arms. And maybe it’s the medication he’s on, but he’s even agreed to share his room for the entire journey….
It’s a long trip in close quarters, and within days their berth becomes the scene of some steamy railway romps. But is Marni just having fun…or is she taking Hunter for a ride?
~~~~~~~~~~~~~

WELL THIS WAS ONE HELL of a way to wake up.

All traces of sleep, painkillers and whiskey cleared from his head with a blink. Hunter was left with surprise and an overwhelming degree of passion.

Then again, this was the first time he’d ever had a fantasy come to life.

As still as a cat gauging its prey, Hunter inspected the woman next to him. She looked like a cross between a porcelain doll and a sex kitten.

Flaxen blond curls waved around her face, floating to pale white shoulders. Her eyes were huge, the color of a cloudless sky and surrounded by a lush fringe of dark lashes. Heavy with passion, clouded with dazed shock, they had an intelligence in their depths that warned Hunter not to underestimate her. The rounded cheeks, flushed pink, and cupid’s bow mouth completed the picture of adorable confusion.

Figuring it was only fair since she’d taken her own visual tour, he shifted back a little to take in the rest of the view. Tawny Weber has been writing sassy, sexy romances since her first Harlequin Blaze hit the shelves in 2007.  A fan of Johnny Depp, cupcakes and color coordination, she spends a lot of her time shopping for cute shoes, scrapbooking and hanging out on Facebook.

Readers can check out Tawny’s books at her website or join her Red Hot Readers Club for goodies like free reads, complete first chapter excerpts, recipes, insider story info and much more.  And for a limited time, she has a few open spots on her Street Team!

MY REVIEW:
Midnight Special is the first book I have have had the pleasure to read by Tawny Weber. I had been hearing good things about her work and it sounded so good I jumped at the chance to be able to host her promo tour as well as be able to review the book. I am really glad I did too. I really enjoyed Midnight Special, Tawny Weber has created some dynamic characters that I had a blast reading about.
Marni Clare is a strong, independent, and determined woman on a mission to make it as a big time news reporter. She thinks the perfect story has fell into her, well her bed, when she ends up sharing a room on board a train with FBI  agent Hunter. Oh my goodness are these two hot together. They not only are throwing off sparks these two create flames until they finally give into temptation. Then they really produce some flames with some spicy scenes.
Hunter is on the mission to get the bad guy and get him good. He really didn't plan on meeting up with Marni and falling so hard. Of course there is a few problems along the way, like the fact he didn't know Marni was a reporter. This also makes for some really interesting scenes.

I found Tawny Weber's work to be a smooth read with a story that quickly caught my attention. There is a bonus story along included with Midnight Special, Coming on Strong. I am looking forward to reading that and sharing my thoughts with you on that soon. So stay tuned for my review on that story soon.
Posted by Reviews By Crystal at 12:01 AM