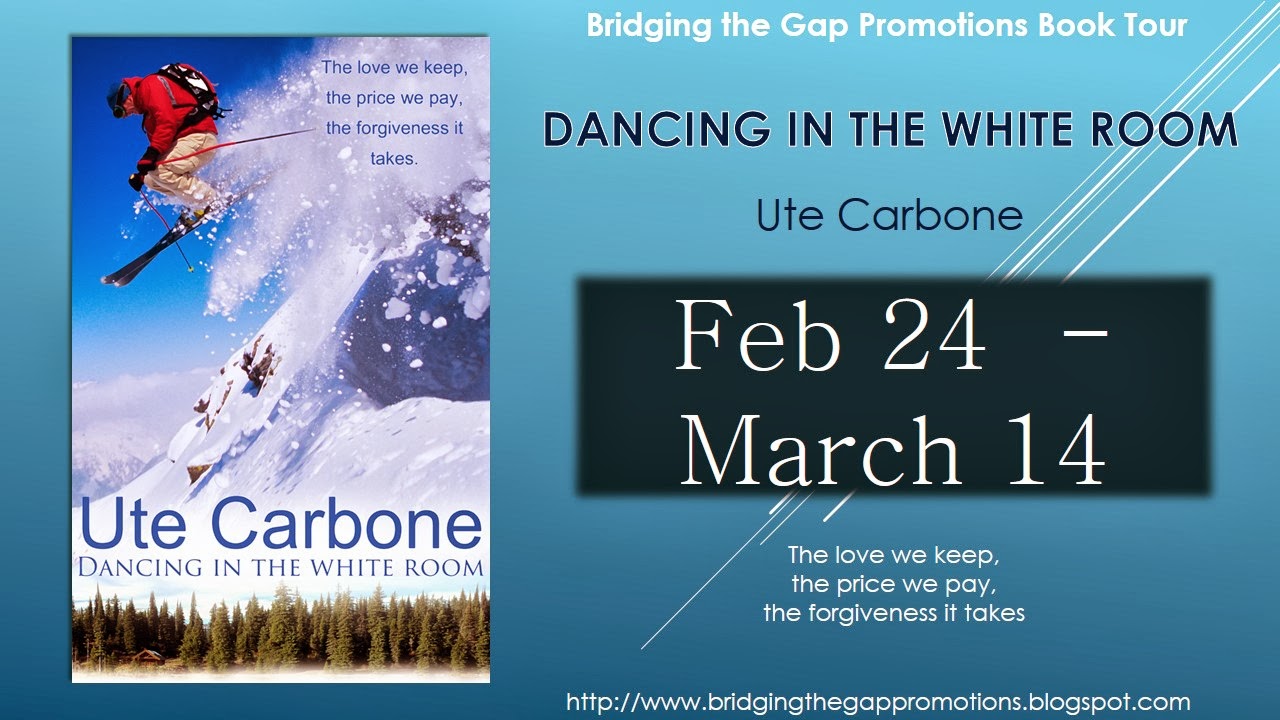 Dancing in the White Room
by Ute Carbone

Ute is giving away a total of 3 ebook copies, winner’s choice of any of her current books,
including Dancing in the White Room.
~~~~~~~~~~~~~~
INTERVIEW:

Crystal: Today I have the pleasure of asking Ute Carbone stop by and answer a few questions. Welcome Ute and I'm so happy to have you here today.
Would you share a little bit about yourself with us today?

Ute: Hi Crystal. Thanks for having me on your blog today.  About me, let’s see, I live in New Hampshire. I have two grown sons.  As you might guess from Dancing in the White Room’s cover, I  enjoy skiing and hiking, though I don’t do either as much as I’d like anymore. I also love movies and plays. I have an addiction to dark chocolate. And also to books, there’s nothing better than settling in with a cup of mocha and good book.

Ute: This is an idea that’s been rolling around in my head for a long time. The original kernel came from a book by Jon Krakauer  called “Into Thin Air” which is about an climb on Mt. Everest that went horribly wrong. In the book, he mentions ever so briefly that the people who do these kind of things—climb Everest, defy the odds--  often have trouble in their personal lives. It got me to wondering, what would it be like to be in a relationship with a guy who’s always out doing what some might think is crazy. I know nothing about mountain climbing, but I grew up skiing and so Bell became an extreme skier instead of a mountain climber, although the two do have some cross-over.

Ute: I have quite a few stories in my WIP file, including another about skiing that centers on racing. I’m hoping to get a couple of the stories finished over the next year or two. Top on the list is at the moment is the next installment of a historical novella series I’m doing. I’m writing it a bit like an HBO series, with one story building on the one before it. The challenge is to make each a stand alone you could read without reading the others. The series is called Anton and Lenora . It’s set in the 1850’s in and around clipper ships. Books one and two are available, book three comes out in April and I’m working hard to finish book four, called Willow, which takes the pair to Shanghai.

Ute: I try to write everyday, though I don’t always manage it. And I write all my first drafts long hand in a journal.

Ute: The short answer is yes.  I grew up with a small ski area quite literally in my back yard, my folks owned a restaurant at the base of the access road. And later, in college, I was a ski patrol woman for a time. So I knew the basics. But even so, I didn’t know a lot about extreme skiing, which is a world onto itself. It amazed me the kind of challenges these guys would undertake. Skiing down Denali is one of them.
I used a few facts I discovered in the book. One that struck me was that Wickersham’s Wall—a part of Denali—is so steep that skiing down it almost always causes some sort of avalanche.

Ute: There are a lot of authors I love, too many to name here.  I’ve mentioned Jon Krakauer, who writes, among other things, about climbing and the outdoors. I also love Alice Hoffman and Anita Shreve and Barbara Kingsolver. That’s just the tip of the iceberg, though.

Ute: I would like to try my hand at magical realism at some point—there’s sort of a modern day fairy tale brewing in there somewhere. But it may have to wait, I’ve got a lot else to get to. Writing historical is a new thing for me. It’s challenging, because it takes me out of my comfort zone.

Ute: Hmm, my favorite scene in Dancing in the White Room isn’t a love scene, though I do like those. It’s a scene where Mallory (the main character) is tucking her little girl into bed. Bell (the hero) has left for Denali to ski down the West Rib. It’s a dare-devil feat, and one so dangerous that Mallory thinks it might kill him. She’s angry that he’s gone—she asked him not to do it. But daughter Emily, who adores here father, thinks it’s all pretty wonderful—

Here’s the scene;
Settled into bed, she asks for a story and I reach for a book. “No, not that one, Mommy,” she says. “I want the story of Daddy and the mountain.”
This stops me for a minute. “I don’t know that one, Em.” I have to bite my lip to keep from crying.
“Yes, you do. Daddy went to the big mountain,” she begins and she relaxes back on her pillow expectantly.
I swallow hard. “Oh, that one,” I say and pick up as best I can. “Daddy went to the big mountain. It’s in a place that’s far away.”
“Alaska,” says Emily.
“That’s right. Alaska. Where it’s always cold and snowy.”
“And there’s people live in snow houses.”
“That’s right. They’re called igloos.”
“Will Daddy live in a igloo?”
“Some of the time. And sometimes in a tent.”
“And what’s the big mountain called?” she asks, though I know she already knows the answer.
“It’s called Denali.” The name is loose and pliable on my tongue. It rolls like pebbles in my mouth.
“And there’s a big wall. Tall as the tallest tallest. And Daddy’s going down down down in the snow.”
She’s got the facts a little confused here, but I’m not up to correcting her. “That’s right, honey,” I say. “Daddy’s going to be the first one to ski down it.”
“Mommy.” Emily’s voice is heavy with sleep. “When I get big I’m going to ski down the big wall too.”

Dancing in the white room is slang for skiing or boarding in deep powder snow. The dancer is PD Bell, one of the best extreme skiers on the planet. Mallory Prescott, the woman who lives with him and loves him, is used to Bell’s exploits. A patrol woman at Whiteface Mountain near Lake Placid, New York, Mallory is no stranger to risk. But this time Bell is taking on the West Rib of Denali, highest and most dangerous mountain in North America. It’s a descent that has never been done, though it’s been tried. Five years ago, Bell had tried it. The attempt nearly killed him. Five years ago, he promised Mallory he wouldn’t try it again.
Over the six weeks in which he’s gone, Mallory begins to question her relationship with Bell. Does he really love her? Is he in it for the duration? What has loving him cost her?  Mallory’s life choices are thrown into stark relief when her daughter Emily takes a terrible fall. Together with her life-long friend Creech Creches, she must work her way through a maze of uncharted territory at a hospital miles from home.
Dancing in the White Room is the story of the love we keep, the price we pay for that love, and the forgiveness it takes to hold on to what is precious.


Settled into bed, she asks for a story. “I want the story of Daddy and the mountain.”
This stops me for a minute. I have to bite my lip to keep from crying. “I don’t know that one, Em.”
“Yes you do. Daddy went to the big mountain,” she begins and she lies back expectantly.
I swallow hard. “Oh, that one,” I say and I pick up as best I can. “Daddy went to the big mountain.”
“And what’s the big mountain called?” she asks, though I know that she already knows the answer.
“It’s called Denali.” The name is loose and pliable on my tongue. It rolls like pebbles in my mouth. 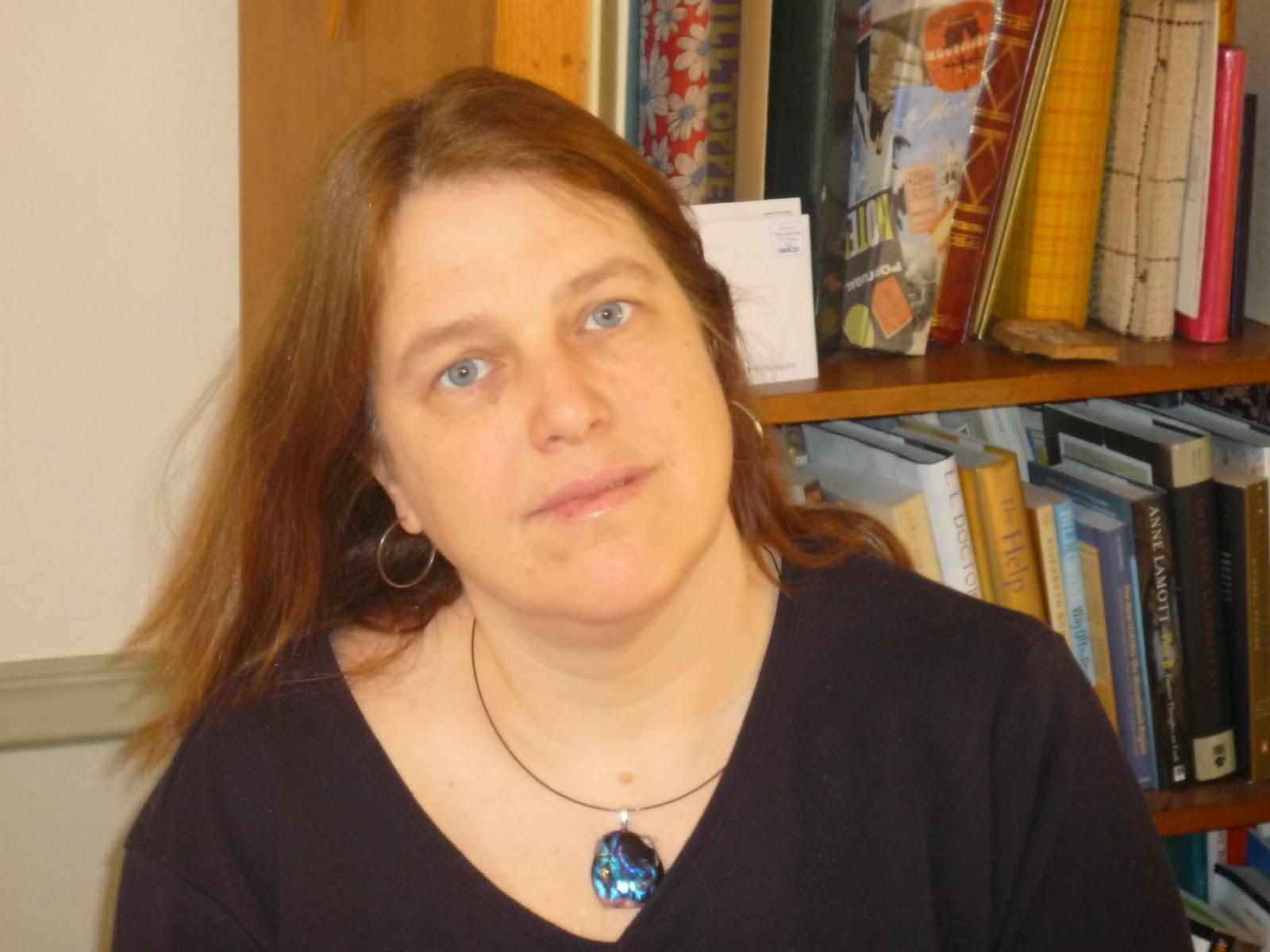 Ute (who pronounces her name Oooh-tah) Carbone is an award winning author of women’s fiction, comedy, and romance. She and her husband live in New Hampshire, where she spends her days walking, eating chocolate and dreaming up stories.

Books and Stories by Ute Carbone: