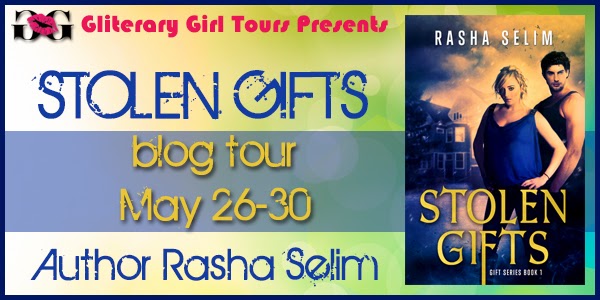 GIVEAWAY: Author Rasha Selim will be giving away a $10.00 Amazon Gift Card AND a signed copy of STOLEN GIFTS. Please use the RaffleCopter below to enter.

Whoever said you can’t go home again was right.
My name is Van, and my life isn't exactly going the way I'd expected. I moved far from home, away from everyone I know and love to avoid having to reveal my Gift...a Gift so strong it scares me. A Gift so strong I know people would try to use me for their own gain, regardless of how much it may hurt. A dear friend from my youth is getting married back home, and while I'm thrilled for her, I know what waits for me there--disappointment from my parents, and concern from my brother and friend.

But worst of all, I have to face Caine, a man I have loved for as long as I can remember, who just Somehow, Caine and I find ourselves in the middle of investigating the mysterious disappearances of other Gifted people. When the two of us are abducted, I have to decide if I am willing to use my Gift to save us, even though doing so will reveal my abilities to Caine. Little did I know that using my Gift is exactly what the villain is waiting for…putting both our lives are in jeopardy.

Having a Gift is hard. Keeping the ability to read and manipulate minds a secret from family and friends is torture.

Vanessa (Van) Lyons is terrified of her very powerful Gift of Mind, and has been hiding it
from her family since she was a child. Her Gift troubled her so much that she moved away from everything and everyone she knew to avoid the possibility of the truth being discovered. She's stayed away for a long time, making excuses for staying put in her charming little cottage in a small town far enough away to be a comfortable buffer. But an invitation to the wedding of her childhood best friend Kelley brings her back home...and forces her to confront all of her fears and emotions. It also forces her to be face-to-face with the man she has loved since they were young.

Caine Moore is a handsome journalist with a playboy reputation. Seen frequently about town or in the tabloid pages with a different beautiful woman on his arm, he has become a
completely different man from the boy Van grew up with. Tension builds between them as he sends Van mixed messages throughout the pre-wedding festivities, confusing her and making her yearn for things she's spent a long time convincing herself she could never have.

Caine has been working on a story, and has seen things he shouldn't see. In his desire to
protect Van, he inadvertently pulls her into an intriguing but deadly case that puts her right into the killer's path...

My gaze shifted to my reflection and the man who came to stand behind me. I saw the
stark differences between us. It was reinforcement to why we would never be. I was short to his all. Light skinned to his tanned. My blonde hair to his black. Even though we both had light eyes, my green eyes have hazel undertones, but his eyes were a deep blue. In personality we were polar opposites. I keep to myself and like to remain under the radar, whereas he is well known and uses that popularity to his advantage. There were no two people more different than us. So when he leaned in and whispered in my ear, “We look good together don’t we?”

Author Rasha Selim was born in Cairo, Egypt and was raised in both Cairo and Dubai, United Arab Emirates. She moved to the U.S. to attend college and pursue a career as a Forensic Psychologist.

She left criminology behind to become the mother of three wonderfully active boys. Rasha has spent her life engaged with books and as stories of her own began to develop she knew that she had to get
them down in print. She is extremely excited to be sharing her stories with the world. Rasha lives in upstate New York where she is blessed to be surrounded by her loving and supportive husband, children, great friends and incredible books.