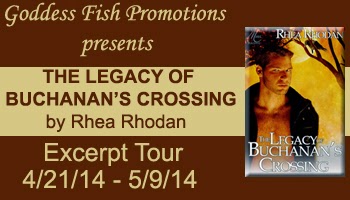 The Legacy of Buchanan’s Crossing
by Rhea Rhodan


Rhea will be awarding a $30 Amazon or Barnes & Noble GC to a randomly drawn commenter during the tour. Please be sure to leave a comment below along with your email address in case you are the lucky winner. To increase your chances of winning please visit the other tour stops. You may find those locations here... http://goddessfishpromotions.blogspot.com/2014/03/virtual-excerpt-tour-legacy-of.html

What price will destiny demand?

Warding the Crossing has always been Cayden Sinclair’s destiny. With her beloved Gran growing weaker, it’s time the little witch took her place. Juggling substantial curves for her frame and an inconvenient inability to control her power has always been a serious challenge. But not until discovering her fated Keeper is the extremely hot, tragically clean-cut insomniac who’s ignored her for months, does she truly fear failing her legacy.

Now that he’s finally on the road to the top with an offer from a big developer, Clint MacAllen can’t allow his struggling construction company to be threatened by a vicious nightmare, or his inexplicable attraction to a goth clerk working the graveyard shift at HandiMart—no matter how potent they are.

J. Milton Developments has its own agenda for Buchanan’s Crossing, and they’ll spill blood to get it.

The currents of magic eddied around her, ruffling her hair in the airless night. No breeze stirred the leaves. No creature made its home in this virgin wood. The deep quiet of the place didn’t soothe her tonight. It was the deafening silence of expectation.

It knew what she was here to do. It had probably known before she had, before she’d knocked on Gran’s door with a mouth full of apologies for arriving late. A single glance had told her, before Gran herself had, that she wasn’t up to joining Cayden at the Crossing for the keeping of Beltane. She had kissed Gran goodnight, then made her way up the hill, certain of what must be done.

This was no longer an ordinary Beltane celebration, for Cayden or for Buchanan’s Crossing.

The darkness was so deep she stumbled in the wood more familiar to her than her parents’ living room. Every step felt wrong, or felt right and was wrong. Little time remained to make the necessary preparations for the special ceremony, even less to fight off the panic threatening to choke her.

She had to find her tree, the one whose image was inked from her third chakra to her first, its branches beginning below her breasts, its roots curling around the top of her thighs. How many times over the years had she leaned against its great trunk, huddled in the gnarled roots that broke the earth and sheltered her, taken strength in their embrace? She needed that strength now.

Rhea Rhodan resides in Minnetonka, Minnesota and has been telling herself stories since long before she could write. She attended the University of Minnesota with a focus on Journalism, then Brown Institute for Broadcast Journalism. After many adventures, misadventures, and a couple of short marriages, she found the love of her life in Regensburg, Germany, and has been living happily ever after since.

She journaled those adventures extensively (some might say rabidly) beginning in middle school, but didn't combine her writing and story-telling until several years ago, when one of the stories grabbed her by the throat and shook her like a rag doll until she gave in and wrote it. Having tasted freedom, her muse refuses to return to the confines of her head, and has successfully turned the tables, keeping her at the keyboard to appease it.

Her stories always had a twist of magic or a touch of the paranormal. Why the romance? Because she believes in happy endings, and helping people imagine them helps them create the magic to find their own.

She welcomes feedback and fan mail :>). You can join her on Facebook and/or Goodreads, too. Rhea is always happy to meet new friends.

Buy links for The Legacy of Buchanan’s Crossing:

You may also be interested in her debut novel, a Musa Publishing Editor's Top Pick, Finding Grace, available here: http://musapublishing.com/index.php?main_page=product_info&cPath=65&products_id=299 and at popular on-line retailers.
Posted by Reviews By Crystal at 1:00 AM