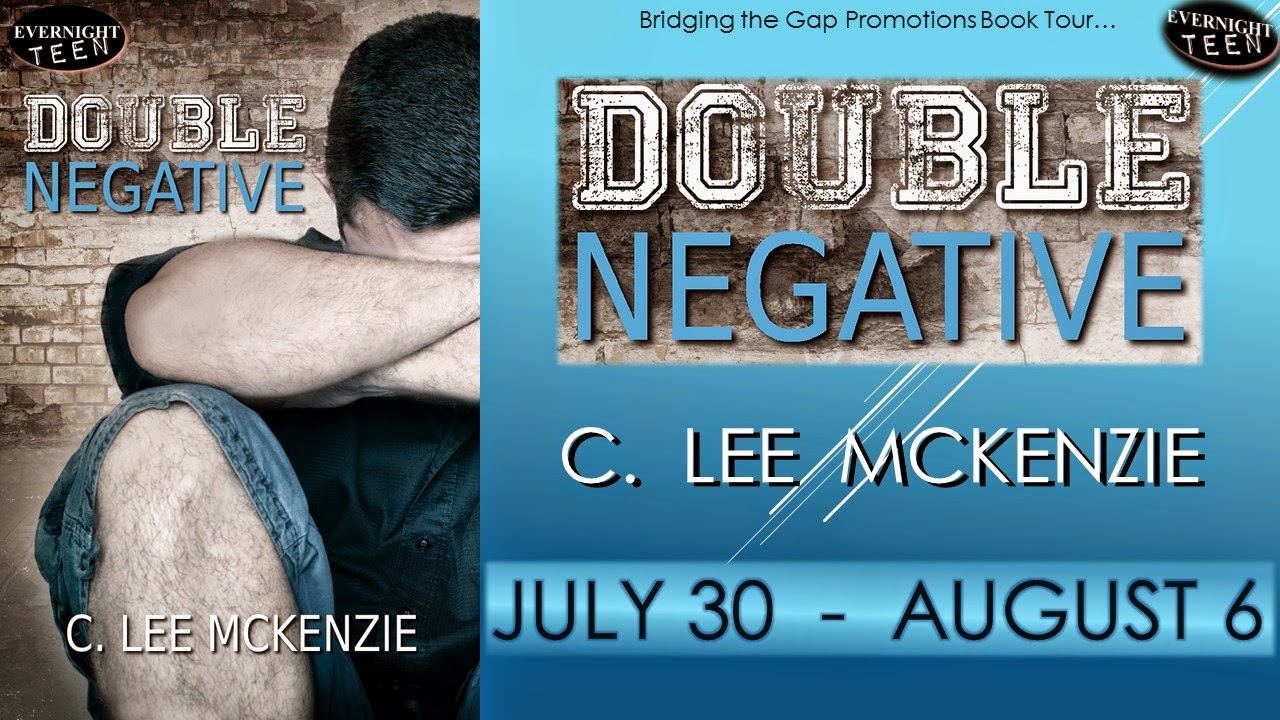 Please use the RaffleCopter below to enter.

Today I have the pleasure of hosting C. Lee McKenzie. We would love to hear more about your newest book and what inspired you to write the story. Hello & Welcome!

Hi. Thanks for hosting me today. It’s great to be here.

You asked what my newest young adult book is about, so here’s a quick summary of the story.

Double Negative’s about a sixteen-year-old named Hutch McQueen. He can barely read, and he’s trapped in a dysfunctional family. When he tries to escape, he chooses the wrong way and lands in juvenile hall. This is probably the best break Hutch gets in life because he meets a priest and a teacher who want to give him another chance at the freedom he craves. All he has to do is listen, but that’s really hard for him, almost impossible.

As to what inspired me write this story, I’d have to say two things. I was reading about illiteracy in the U. S. and wondering how the stats could be true in an era of constant written communication.

I suddenly asked myself the question, “What if I couldn’t read?” The answer made me ill. I couldn't imagine a world without access to all the books I love, let alone not being able to follow simple written directions. That was one thing that started me making notes that lead to Double Negative.

Maybe it was a coincidence, but about the same time, a friend and I were having a conversation. When she asked me what I liked to do with my “free time” these days, and I answered her with hike or read. Again, that question popped into my head, “But what if I couldn’t read?”

Hutch became my poster boy for the non-reader, and I wanted to turn him around, set him on the path to literacy and save him from his bad choices.  So that’s really what this story is about and how I came to write it.

Sixteen-year-old Hutchinson McQueen is a big time loser. Trapped between an abusive mother and an absentee father, his one thought is escape, but everything he does to get away lands him in trouble.

Shackled by poor reading skills, he squeaks through classes with his talent for eavesdropping and memorizing what he hears. When he shoplifts and lands in juvenile detention, the court sentences him to a county youth program. There he meets the priest and Maggie, a retired teacher. They’re determined to set Hutch on a path leading away from trouble. Hutch is determined not to cooperate.

It isn’t until he’s facing serious charges that he confronts the truth—his own bad choices are trapping him. When he's offered the freedom he craves, all he has to do is take it.

Kranski’s office might as well be home. I spend more time with him than I do with Dee Dee, and for good reason: the principal’s friendlier than my mom.

I ease into the familiar hot seat across from him and face the shiny nameplate on his desk.

“See this?” he says, holding up the plate in front of my face. “It says, ‘Principal Noah Kranski.’ That means you’re supposed to follow my rules as long as you’re in this school.”

I roll my eyes.

He shakes his head and slams a thick file down in front of him. “This makes seven times this year you’ve cut Mr. Diakos’s class, and it’s only September.” He writes something at the bottom of a page. When he finishes, he looks up. “Did I miss any?”

Kranski jabs his pen into a “World’s Best Dad” cup, and leans back with his hands behind his head. This is what he always does before he sentences me. “You get to think about changing your ways for the rest of the week. When you come back, you’re still responsible for all the class work and the tests, just like always.”

“Just like always.” I repeat the words so I got something to say that don’t sound like I’m a smart mouth. Last time I left saying, “Thanks,” and Kranski told me to cut the sarcasm. Who gives a rat’s ass about what Kranski says? I’m free, for four days.

I’m almost at the door when the secretary pops her head inside. “Sorry, Mr. Kranski, but there’s an emergency in the gym. They need you right away.”

He’s out before me, a gimpy old guy running on bad feet.

I plug into my iPod, pull up The Rockets’ newest hit, and strike out across campus. Blaze’ll be at the Smoking Tree. I follow the hard-packed foot trail that leads from the back of the school, around the curve of the hillside and up the slope. The tree’s just far enough away to keep under Kranski’s radar, yet near enough to drop in for a few tokes when I need them to get through Deek the Greek’s English class, or face going back to Palm Street and Dee Dee.

Blaze is there, talking on his cell and dealing with some kid with slicked-back hair. Blaze jerks around, pockets the phone, and then relaxes when he sees me. “Yo, thought you was the cops for a minute. You get suspended again?”

“Rest of the week.” I take my ear bud out, drop my backpack and plop onto the shady ground. “I need a joint.”

“Where’d you get that?” He points to my iPod.

“Can’t remember. It sort of appeared.”

“Right.” He smirks and tosses me a joint along with a lighter.

The kid with the greased hair ducks under a limb, and walks in the direction of the school. “Hope you got cash, man. I’m outta credit here,” Blaze says.

I dig into my pocket and pull out a ten.

He laughs. “With what you already owe me, for that ten,” he coughs, “you get a few”––another cough––“hits, man.” He holds out a roach clip with a smoking joint. “Give me that one back.”

I hand him the joint, settle against the tree trunk and roll my lips over the small brown tube. Closing my eyes, I suck the warm fog into my lungs and hold my breath. The weed winds its way through my blood and into my brain. Kranski turns into a cartoon of a cup with World’s Best Dad wrapped around his middle. Dee Dee stretches into a giant beer bottle and rolls across the kitchen linoleum. The sky turns soft and blue, with the Smoking Tree splashing crazy shapes over my jeans.

“So, how are you breaking the news to Dee Dee this time?” Blaze reaches out and grabs his joint. “She said she was bouncing your butt the next time Kranski suspended you.”

My mom don’t care what I do, but Kranski makes her life hell when he calls her in to see him. These trips to his office take away from her social life and shake her out of bed before noon. I laugh. “Guess I’ll have to move in with you, dude.”

“Anytime. I told you, man.” Blaze inhales, coughs, and then inhales again to replace the gray smoke he’s wasted in the air.

I plug back into some tunes and hang with Blaze under the Smoking Tree through three more sales. He rewards me with a few hits for acting as lookout, something I can do while I get a story together for why I’m bounced for four days. The weed and the Rockets take the edge off what’s going down later. I’m in for ‘Destruction by Dee Dee’ no matter what I say. I roll over on my right side and trace the white line from my wrist to my elbow—one of her nicer moves with a broken glass.

Stretching out on the lawn, I stare up through the tree branches. How’d it be to fly straight into those clouds, poke my head inside and stay until I wind up on the other side of the world? Goodbye, Larkston. Goodbye, Dee Dee.
I must doze off because when I open my eyes the shadows from the tree have shifted from my right side to my left. I squint at my watch. It’s after three. My ride! Hope Eddie didn’t take off without me. I hate that walk, halfway across town to Palm Street. I grab my books. “I’m out of here.”

C. Lee McKenzie is a native Californian who grew up in a lot of different places; then landed in the Santa Cruz Mountains where she lives with her family and miscellaneous pets. She writes most of the time, gardens and hikes and does yoga a lot, and then travels whenever she can.

She takes on modern issues that today's teens face in their daily lives. Her first young adult novel, Sliding on the Edge, which dealt with cutting and suicide was published in 2009. Her second, titled The Princess of Las Pulgas, dealing with a family who loses everything and must rebuild their lives came out in 2010. Her short story,Premeditated Cat, appears in the anthology, The First Time, and her Into the Sea of Dew is part of a collection, Two and Twenty Dark Tales. In 2012, her first middle grade novel, Alligators Overhead, came out.Double Negative is her third young adult novel.

Posted by Reviews By Crystal at 5:17 PM