Raising Her Hopes By May Williams ~ Bridging the Gap Promotions ~ Giveaway 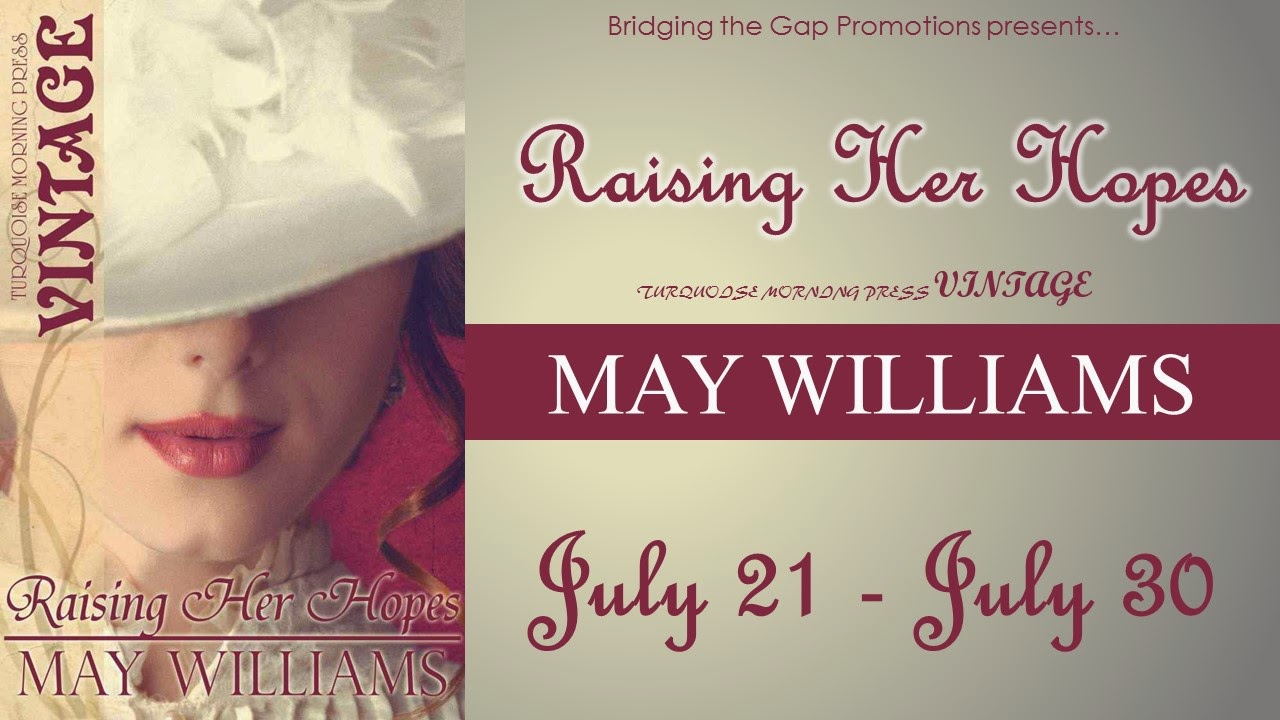 How did you first meet your writer?
I met her through my brother. She told Jim’s story in an earlier book called, Riveting His Attention. Plus, she wrote my employer’s story in Ruffling Her Skirts.

Did you ever think that your life would end up being in a book?
Not at all. I’ve always been the quiet type. Everyone whispers about how beautiful I am, but I tend to be shy.

What are your favorite scenes in your book: the action, the dialog or the romance?
Definitely, the romantic scenes. My favorite is the garden scene in London with stars overhead and Sidney in my arms.

Did you have a hard time convincing your author to write any particular scenes for you?
My author doesn’t like to cause too much trouble, but what’s life without problems? You know that scene in the park where the young man treats me so badly, I had to force her to tell that one. She wanted to gloss over it so as not to hurt my feelings.

Do you infiltrate your writer’s dreams?
I don’t know about dreams, but I’ve heard her talking to me when she drives the car and folds the laundry.

What do you like to do when you are not being actively read somewhere?
Trimming a hat. I like feathers and bows.

Are you happy with the genre your writer has placed you in?
Absolutely, I never expected to find love again, but if I’m in a historical romance that’s what has to happen. I couldn’t be more delighted.

Do you like the way the book ended?
Yes, although I didn’t appreciate getting tricked into seeing Sidney again by my sister-in-law. But all’s well that ends well according to the Bard.

Would you be interested in a sequel, if your writer was so inclined?
I’m the end of the line, I hear. She’s written two books leading up to mine and all the characters appear to be happily married now.

What is your least favorite characteristic your writer has attributed to you?
Why must I be so pretty? I don’t understand why that was a necessary part of the story.

What do you do for a living?
I manage a shop that sells ladies’ apparel. We specialize in custom gowns and accessories. I love to put together beautiful combinations in the display windows.

What is your most prized possession?I have a lovely statue of a shepherdess on my mantle. It makes me think of Renaissance poetry and how hard men have to work to get us to love them.

When Sidney White arrives in England, he seems like the perfect man for Belinda Ferguson.
She wants to love him, but first she must overcome her past before she is free to raise her hopes.

Sidney White has one objective when he arrives in Bath, England. He plans to leave his daughter with relatives before returning to the United States to embark on a dangerous mission for the Union Army.

An encounter with the beautiful Belinda Ferguson strikes like lightning at his heart, but she doesn’t give her love or attention freely. Belinda’s past makes her cautious about placing her trust, especially in a man who must leave her to complete his task.

Despite the separation his work requires, Sidney convinces her to risk loving him and she dares to raise her hopes.

Belinda barely made it twenty paces outside the Hazel’s door when Sidney came alongside her and fell into step. He didn’t reach for her arm as she expected, but he was close enough that they bumped shoulders.
“I believe it was my job to see you home this evening,” he said as they crossed the center of the square.
“You’re undoing years worth of work on my part.” She tried for a light, breezy tone as if his presence were entirely superfluous.
“How so?”
“I’d finally convinced Benjamin that I didn’t need an escort. After you return to the States, I’m sure he’ll go back to walking me home and I shall have to start all over again.”
“My apologies, but there’s an obvious difference between his intentions and mine.”
“Is there?” she questioned. “The walk is the same.”
“I’m sure Benjamin does not wish to kiss you as I do.”
“Mr. White.” She stopped in the glow of a street light and faced him, trying to formulate a firm rebuff and control her rapidly beating pulse.
“Please, will you call me Sidney?”
“No, I don’t think I shall. You may turn back now. I can see my gate.” She resumed walking. Any man of sense would cease following her.
“Do you dismiss Mr. Barth in the same way? Or is he allowed a kiss and entrance past your door?”
“My relationship with Mr. Barth is not your concern. Please leave me or I shall have to assume Benjamin’s ill opinion of you is correct and my hasty judgment a few nights ago was erroneous.” She tried for a haughty tone to use as a weapon against him, but as usual it failed her. Being too nice could be a curse at times. “Perhaps you are a rogue after all,” she finished, slightly breathless, with one hand on her gate and the other held out in a gesture meant to stop him.
Brushing by her upraised hand, he closed the distance between them. “I hate the thought of proving my brother-in-law correct,” he put a finger under her chin and tipped her face up, “but some things are worth the risk.”
His lips were soft, yet demanding, as they met hers. She wanted to resist, to seal her lips tight, but the stirring of passion she felt in him under the controlled surface matched hers. When his arms circled her, she placed her hands on his lapels not to push him back, but to touch him, to have the impression of his strength on her fingers.
He broke the kiss she’d been unable and unwilling to resist and mercifully stayed silent while her world righted itself. No man other than Heath had ever kissed her, held her like this. She’d evaded Mr. Barth and he was too nice to press her. This man was different. He had no fear of demanding what he wanted. She had every fear of giving in to his demands.
“Goodnight, Belinda,” he whispered close to her ear. 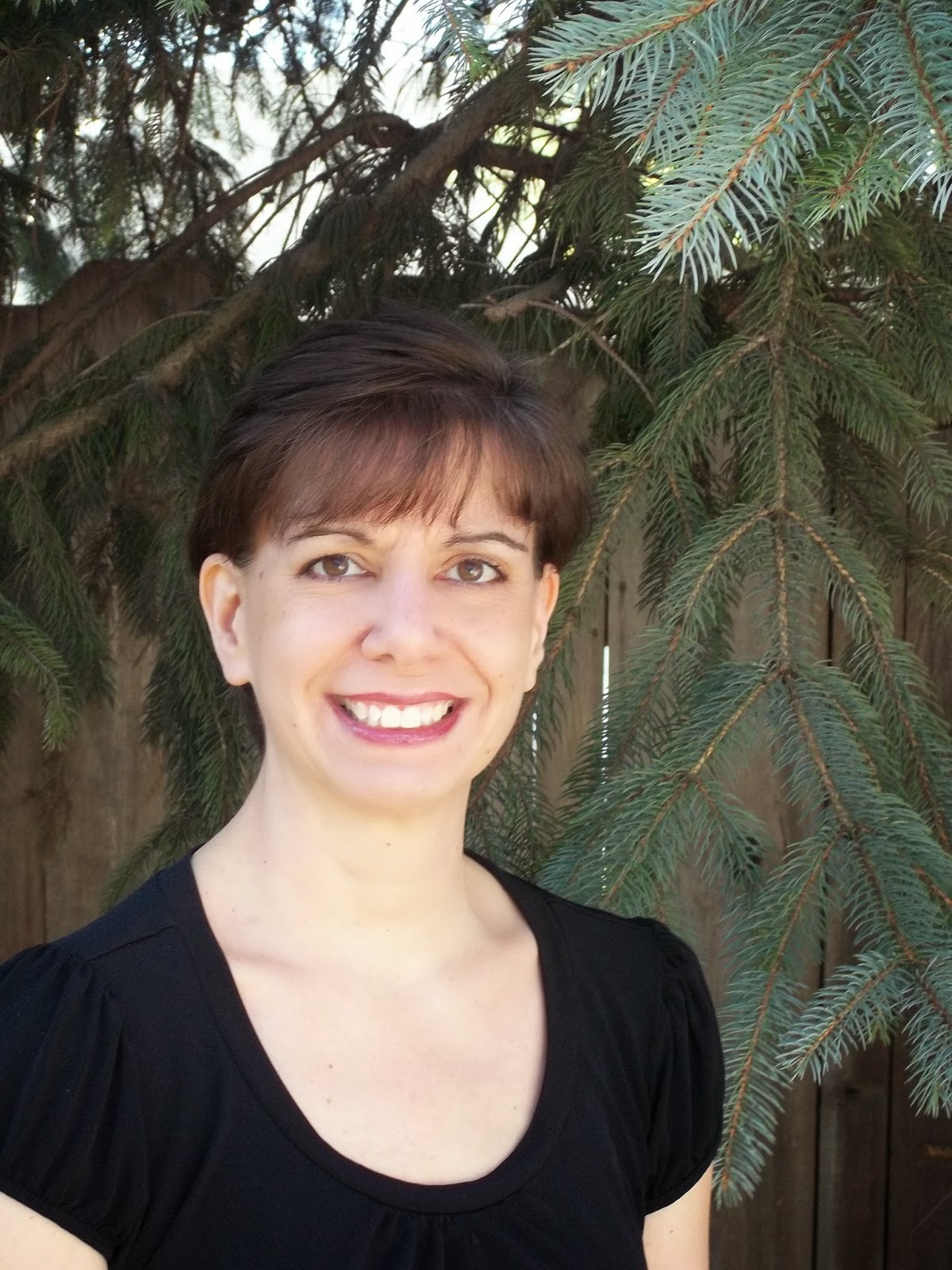 May loves romance. Big pink roses, chocolate hearts, sunset walks, but, most of all, she loves romance novels. She’s been reading romances since she first discovered the public library where the librarians didn't notice or didn't care what she was checking out even though she hadn't hit puberty yet.
Since then, May has continued to read every genre of romance, but she writes mostly historical. Places and time periods have stories to tell. And she likes to listen. Her most recent novels are Victorian era pieces where she can imagine beautiful gowns and elegant teas.
When May’s not writing, she manages a houseful of children, pets, and flowers grown in her garden.

Posted by Reviews By Crystal at 4:10 PM

Email ThisBlogThis!Share to TwitterShare to FacebookShare to Pinterest
Labels: Bridging the Gap Promotions, giveaway, May Williams