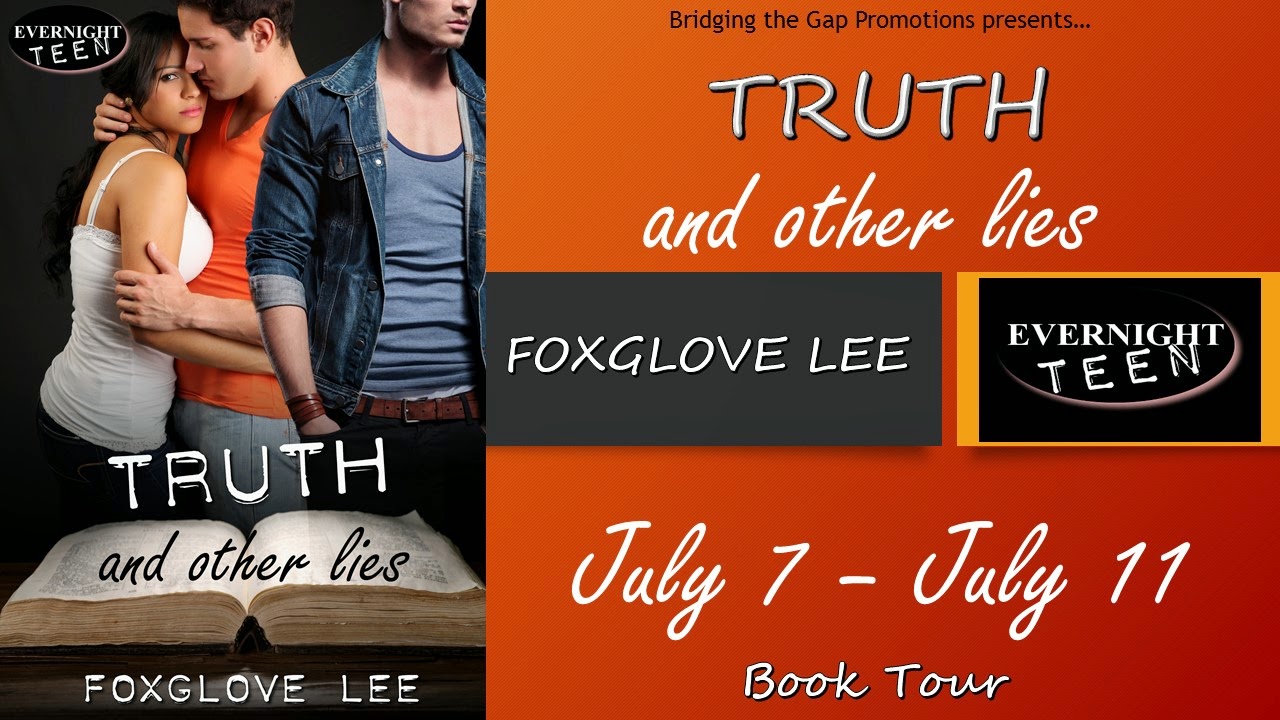 TRUTH and other lies
by Foxglove Lee

Whenever you write a new book, people inevitably ask what inspired the story.  For me, the idea for a novel is usually sparked by something that happens in real life.  All my stories are “what if” scenarios. Maybe I hear a snippet of a conversation on the subway, and I think to myself, “What if this happened, then that happened?” and it builds and builds. Characters jump in to subject themselves to the torment of my imaginary worlds.  They volunteer for this, silly rabbits.

I have a very clear recollection of what inspired my latest book, “Truth and Other Lies,” which is now available from Evernight Press.  I visited an old friend (we’ll call her Millie, since that’s “her” character’s name in the book). Millie has a life-threatening condition doctors can’t seem to fix or even properly diagnose.

My friend hasn’t been able to work in… two years?  I’m trying to remember when this all started.  She’s the kind of person who will suck it up and get the job done even when she’s deathbed-sick, but she kept passing out at work so her employer was like, “Seriously, you need to take it easy!”

Millie is good at everything… except “taking it easy.”  So by the time I went to stay with her, she’d written a novel.  Of course she had!  What else are you going to do when you’re hospitalized and bedridden for weeks at a time?

But wait… there’s more!  She hadn’t just written any old novel.  She’d written a 200,000-word tome based largely on her life. And, let me tell you, if you bundled up all your worst nightmares, that’s Millie’s life. She’s had an unbelievably rough time.  So now she’s written this book and she wants me to give her feedback.

I wasn’t sure how to react.  You’re going to think I’m a horrible person, but when you love someone as much as I love Millie, sometimes you don’t want to be exposed to all the details of tragedies and abuses they’ve endured.  I couldn’t see beyond my own fears at a time when my only concern should have been my sick friend. It’s terrible, but I’m being honest with you, here.  Humanity isn’t always pretty or kind.

Oh, and did I mention Millie is a genius?  Yeah, she is.  Like, certifiable Mensa material.  Couple that with “good at everything” and I knew, beyond a shadow of a doubt, that her book would be amazing.  So why wouldn’t I say, “Yeah, email it to me. I’ll get right on that!”?  Was I jealous?  Did I think her writing would be better than mine?

But instead of saying any of that, I asked: “Have you revised the book yet?”

“Have you proofread it?  Have you re-read what you wrote?”

A wave of guilty relief came over me.  I didn’t tell her this (and I beg your forgiveness for the excessively scatological imagery), but writing a book is a little like… a little like…

Okay, I once heard that if a person has gold fillings, then every time they chew their food, teensy bits of gold comes off.  Since our bodies don’t digest gold, it’ll go straight through and come out, well, the end.

I don’t know if any of that is true, but it’s the metaphor I like to use for first drafts.  A first draft of a book is like a big collection of crap which may or may not be full of gold dust.  Only the author can sort through all that sh*t.  Honestly, who else would want to?

Write the book.  Leave it alone for a while (Stephen King recommends a minimum of 6 weeks, I believe, in his book “On Writing”) and then come back to it. Whooo-eee!  You’ll smell that stink a mile away.

Yes, your book will probably stink.  Millie’s probably didn’t because, as I said, she’s a genius, but I told her she needed to go through that waiting period and then the revision process before ever showing her book to another living soul.

By the time she got back to me about her novel, I’d already written “Truth and Other Lies.”  She phoned me one day and said, “It’s terrible.  This book I wrote is just… terrible!  I’m so glad I didn’t send the first draft to you—I’d be so embarrassed.  I don’t even know if it’s worth working on.  It’s so bad.”

“Bad” is relative, of course, and I’m sure her book is better than anything I’ve ever written, but I’ll have to wait to read it until she’s satisfied with her work.  Still, I’m indebted to Millie for not only the many years of friendship we’ve shared, but for the spark that drove me to write “Truth and Other Lies.”

Because what if she’d sent that rough draft to me without ever telling another soul it existed?  And what if she died before I’d even looked at it (yes, a morbid thought, I know)?  And what if, when I opened that document, I realized that her book was solid gold?

That’s what happens to Kenny…

Have you ever wanted to get noticed? Have you ever felt like no matter how hard you worked or how hard you tried, nobody in the entire world cared what you did?  Well, what if someone famous—and we’re talking Oprah-famous, here—noticed you for the one thing you wish you could hide? For your one big secret…

That’s exactly what happens to 18-year-old Kenneth McIntyre when television guru Prahna Mehta hails his self-published novel as the next bestseller. Little do his new fans know Truth and Other Lies wasn’t written by Kenny at all… and it isn’t fiction. Sometimes he feels like he’s lying to everybody he loves.

When Kenny gets swept into stardom, how will he hide the secrets he’s kept for years? And, if his lies are exposed, will anyone stay by his side?


Be sure to visit me online at my blog, http://foxglovelee.blogspot.ca/. You can G+ me in the sidebar, and you totally should!  Also follow me on Twitter @FoxgloveLee. Say hi and I’ll be sure to follow you back.  Sometimes I get lonely.  And I set up my Pinterest account when my first book came out so it’s http://www.pinterest.com/tiffanytigereye/. If you called me Tiffany Tigereye I’ll probably even answer to it, LOL. And, of course, check out the new book at http://www.evernightteen.com/truth-and-other-lies-by-foxglove-lee/!

Have you ever wanted to get noticed? Have you ever felt like no matter how hard you worked or how hard you tried, nobody in the entire world cared what you did?  Well, what if someone famous—and we’re talking Oprah-famous, here—noticed you for the one thing you wish you could hide? For your one big secret…
That’s exactly what happens to 18-year-old Kenneth McIntyre when television guru Prahna Mehta hails his self-published novel as the next bestseller. Little do his new fans know Truth and Other Lies wasn’t written by Kenny at all… and it isn’t fiction. Kenny’s been keeping secrets for years. Sometimes he feels like he’s lying to everybody he loves.
When Kenny gets swept into stardom, how will he hide the secrets he’s kept for years? And, if his lies are exposed, will anyone stay by his side?

Nobody cried more than Kenny’s mom.  Not even Kenny.
He started to understand that saying, “he was beside himself,” because that’s exactly how he felt.  At Millie’s funeral, he kept glancing at the empty seat beside him—one of five they’d reserved in the front row for Millie’s family—because he felt like the real Kenny was sitting in the next chair, and his body was just an empty shell.

Millie was right, all those times she’d said her parents wouldn’t come to her funeral.  She’d told Kenny and his mom, “You don’t understand, guys.  I’m already dead to them.  Why would they go to my funeral when I died three years ago?  I died when I came out.”

Kenny didn’t believe that, of course.  When he and his mom made the funeral arrangements, they even asked to have some of the readings done in Chinese.  If her parents did come—and Kenny really and truly believed they would—they’d certainly appreciate the scripture in their mother tongue. They were very religious people, from what Millie said.

The funeral went by in a haze.  As they drove to the cemetery, all he could think about was the look of serenity on Millie’s face as she lay in that coffin.  That gleaming white coffin, like Liberace’s piano.  She would have laughed at it.  She would have thrown her head back, cackled, and said, “You’re gonna bury me in that?”

Kenny could still hear her laughter.

When his mother pulled into the cemetery parking lot, he pressed his head against the cool glass and cried.  More than cried.  Sobbed.  He felt like his heart had been ripped out of his chest.  It was an actual, physical pain, and it hurt so badly he worried that, when he opened his jacket, his crisp white shirt would be stained in blood.  He almost wished it was.  He wished his wounds could be obvious to the world.  He wanted everybody to understand.  Nobody did.

Except his mom.  She squeezed his hand so hard she jammed his knuckles together.  That was a good pain, a useful pain.  He couldn’t bring himself to look at her, but he gripped her hand, trying to show some support.  Because she was hurting too.
“Come on, buddy.”  Mom snapped a tissue from the box and blotted her face, wiped her nose.  “Let’s get out to the gravesite.”

Millie would have thought all this grief was hilarious.

Plenty of people from school had come to the service.  Far fewer had come out for the burial.  Kenny’s mom had paid for everything—the funeral, the coffin, the plot—and it didn’t come cheap.  In all, she’d spent nearly ten grand, most of it on credit.  But Millie was worth the expense.  She was the daughter Mom never had.

Kenny felt old before his time, having to deal with all this death stuff.  But there he went, thinking about himself again.  If Millie were there, she’d tell him to be happy. “Be happy you’re still alive.  Be happy the sun is shining and the birds are chirping.  Be happy spring is in the air.”

Well the sun wasn’t shining and the birds weren’t chirping, not for Kenny.  And spring?  Spring was just a pile of mud. Slick mud and stinking dog crap under a mound of melting snow.

That’s all Kenny could think of during the burial: how Millie was going underground, under all the mud and crap and snow.  She’d never feel the sunlight on her skin.  She’d never hear the birds. She’d died in the springtime of her life.

Foxglove Lee is a former aspiring Broadway Baby who now writes queer fiction for young adults.  She tries not to be too theatrical, but her characters often take over.  Like Noah from her OmniLit Bestseller "The Secret to a Perfect Latke" who comes out in the most unforgettable way imaginable.  Or Stefani from "Token Lesbians" in the "Year's End" horror anthology (Untreed Reads), whose defiance incurs the wrath of the subway system.  Or Mila and Laura, who make each other laugh a bit in "I Hate Love" and a lot in "Happy Birthday, Klutzface!" And who can forget her debut novel "Tiffany and Tiger's Eye"? It's set in the 80s and features an evil doll!