Every year we celebrate interracial and multicultural romance. Come and join us as we celebrate Color of Love 2015 from 27 November - 6 December, 2015.

There is a huge giveaway with this blog hop. Please be sure to enter with the RaffleCopter below. There are several stops on the tour that are offering a prize. Hop along and visit each blog for a chance to win fun prizes along the way.

I am so excited to Host Chanta Rand's stop on the Color of Love Blog Hop.Chanta is celebrating her recent release of Rise of a Queen.

She wants you to celebrate with her too. She's offering a 2016 Love Under Construction Wall Calendar to one lucky commenter. All you have to do is leave a comment below with your email address. 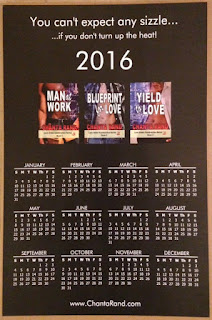 A dead husband. An unconsummated marriage. She needs an heir. Any man will do.

1061 AD. A sprawling empire rich in gold, resources, and military might dominates West Africa. It’s The Kingdom of Ghana, and it’s at the height of its power.

Twenty-year old Nabeela is grappling with her own power struggle. In order to save her younger sister from their step-brother’s clutches, Nabeela agrees to marry a repulsive African prince and bear him an heir. However, her plans are waylaid when tragedy strikes on her wedding night—her new husband dies—without consummating their marriage.

She must find a replacement to impregnate her immediately. Any man will do—including a drunken soldier her servants find naked taking a bath in a neighboring village. Nabeela holds him captive and coerces him into having sex with her—stealing the one thing he can never get back—his seed.

What she doesn’t know is the soldier is Rafan, Commander of a warring tribe’s royal army, and one of her family’s arch enemies. Eager for revenge, Rafan tracks her down once he’s released. But when these two reunite, they realize their lust for each other is far greater than their disdain.

Enamored by Nabeela’s beauty and bravery, Rafan makes her an offer of marriage, and the promise to help her become queen. He convinces her that they are stronger allies than enemies. Even though they share a commitment to unite, there are others who are determined to destroy them and their plans, including the one person Nabeela would have never suspected. In the end, she’s is forced to choose between her passion and her ambition.

Posted by Reviews By Crystal at 5:00 AM