NOW YOU SEE HER by Dale Mayer ~ GIVEAWAY

Check Out the Newest Novel from USA Today Best-Selling Author Dale Mayer, NOW YOU SEE HER. 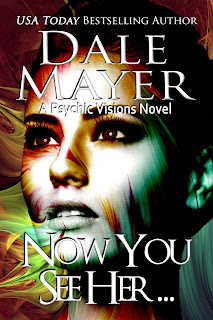 Don’t forget to enter to win a $25 gift card from Amazon!2 Runner-Ups will receive a book of their choice from Dale’s backlist. Please use the RaffleCopter below to enter.

Energy is where all life comes from. Sometimes it is good and sometimes it is evil. Tia escaped from a ‘special program’ and is on the run. Those that had her are hunting her and they won’t stop till they get her back…

Energy. The life force of good … and evil
And sometimes evil is stronger.

Tia spent years imprisoned in a 'special' program. When she finally escaped, she ran as far away as she could. But it wouldn't leave her alone.

Only one person can help her. Stefan. But when she contacts him for help, she gets more than she bargained for. Six weeks later, she awakens from a coma to find more problems than ever – and she's still being hunted.

Dean, moonlighting as a guard at the hospital, finds himself in an impossible situation. His belief system is stretched out of control by someone whom he can't forget ... and can't believe. Until he has no choice.

With everything on the line, Tia and Dean must work together to solve the problem that has somehow – in a very unique way – entwined them both.

Tia wanted to bolt up from the couch and run as far and as fast as she could from the three men. But she didn’t move a muscle. In fact, she wasn’t sure she could. Her body was starting to seizure but her muscles didn’t appear to move. Energy seizures? Was such a thing possible?

People with abilities seemed to have two systems. One physical and one energetic. If a person could get sick on the physical system, in theory it should then be possible to get “sick” on the energetic level.

Just what she needed. Was there an equivalent to cancer on the physical system? ’Cause it would be so typical of her to be the first one. Damn.

Deciding she’d had enough of being stared at, she shifted to a sitting position then stood up – a little shaky but at least she was vertical. She studied the room. As far as she could tell she was still in Dean’s house, but everything was foggy. As if she was looking through a light rain.

“Right in front of you.” Dean’s voice came through a weird cloud.

She rubbed her eyes but she still couldn’t see him clearly. “I can’t see you very well,” she muttered.

Instead of a shocked exclamation, a warm hand landed on her shoulder, grounding her.

Instantly, her vision cleared. He stood in front of her, a worried look on his face.

She smiled. “Thanks, now I can see you.”

“I didn’t do anything, but you’re welcome.” His smile gentled, but his gaze narrowed as he studied her features. She could feel the power of his concern. It was…disconcerting.

“I wish I woke feeling like I’d had some rest. Instead, every time I wake up I feel frazzled, frayed at the edges. Terrible feeling,” she muttered. She should go to the washroom, wash her face, maybe it would wake her up, but she didn’t want to move.

Dean stepped back, letting his hand fall away and as if a connection had broken she suddenly felt worse. Weird. She felt better touching him.

Still, she could hardly hold his hand all the time. Besides, she was better than before she’d collapsed. She excused herself and used the facilities. Afterwards she tried to run her fingers through her hair. Thankfully there was mouthwash in a cupboard. Stefan had brought her meager belongings from the hospital, but apparently toiletries had not been among them.

Finally, she pushed open the door and walked out to the living room and to the men who waited for her. She heard Dean say something to her but where he stood was only a blur of energy.

Turning toward the sound of Stefan’s voice, she realized he was no longer as clear as he’d been either.

She whispered, hating the fear snaking through her, “There’s something wrong with me.”

Then she fell to her knees.

The men rushed to her side.

But not in time.

She toppled face forward to the floor. 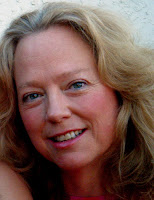 Dale Mayer is a USA Today bestselling author best known for her Psychic Visions and Family Blood Ties series. Her contemporary romances are raw and full of passion and emotion (Second Chances, SKIN), her thrillers will keep you guessing (By Death series), and her romantic comedies will keep you giggling (It's a Dog's Life and Charmin Marvin Romantic Comedy series).

She honors the stories that come to her - and some of them are crazy, break all the rules and cross multiple genres!

Posted by Reviews By Crystal at 12:42 AM