Enter to Win a $10.00 VISA eGift Card (US/INT) during the tour. Please use the RaffleCopter below to enter. You may increase your chance of winning by visiting the other tour stops. You may find those locations here.

Navy SEAL Chief Wyatt Lockwood is fascinated by Marine sniper Captain Talia Culver. But she wants nothing to do with him after learning of his reputation as a
heartbreaker. The cocky Texan refuses to take the hint and keeps placing
himself in Tal’s path. When she agrees to help him tend to needy families in an
Afghan village, she learns there’s more to this SEAL than meets the eye. But is
she strong enough to risk having her heart broken again?


Wyatt can’t stay away from the beautiful, surly Marine. Tal is fascinating—and
frustrating—and he is determined to crack through her tough exterior and get to
know the soft woman he knows lurks beneath the surface. When he joins Tal on a
sniper mission in the Afghan mountains, their bond continues to grow. But the mission takes a dangerous turn. Has he lost his chance with Tal forever?

Realizing she craved another cup of Turkish coffee, Tal pushed back in her black leather chair and stood. As she turned, she gasped. Wyatt stood in the doorway, a welcoming grin on his face. He was dressed in civilian clothes of jeans and a dark blue cowboy shirt with pearl buttons down the front of it. His hands were on his hips. He wore an old leather bomber jacket that made him look like the rogue he was. Plus a black baseball cap with the SEAL logo embroidered in gold on the front of it.
“Wyatt!” she gasped.
“Made the flight in a little early, darlin’,” he drawled, stepping into the office and opening his arms to her.
Tal still limped on her newly healed ankle. She wore a special boot that had a brace within it to shore up her weak ankle for now. She didn’t fly to him as she would have before her injury, but she certainly wanted to! Joyful shock worked through her as she saw him for the first time without his shaggy hair and beard. He was much more handsome now that she could see his full face. His gray eyes sparkled with warmth as he walked toward her with that casual, boneless grace of his. But before he did, he pushed the door closed with the heel of his cowboy boot.
“Come here,” he growled, sliding his arms around Tal, bringing her against him.
Tal whispered his name as she lifted her mouth to his descending one. The scent of sage soap entered her nostrils. He was clean-shaven, his hair now cut military short. In jeans and a cowboy shirt, Wyatt looked more like a male model than the badass SEAL he really had been. Joy flowed through her as he brought his mouth down to hers, and she eagerly returned his deep kiss. There was nothing tame about this meeting, his arms closing tightly around her, her breasts pressed fully against his chest. He tasted of mint toothpaste, his masculine scent making her lower body explode with violent need in every possible way.
Reluctantly, they eased from their kiss, staring at one another in silence except for their ragged breathing.
“How did you get here so soon?” Tal finally whispered, stepping out of his arms.
“I took an earlier flight,” he said. Holding her hands and giving her a critical look, he said, “You look like a CEO, Tal. Nice-looking black wool pantsuit, bright red silk blouse, and hey, you’re even wearing gold earrings. I like your hair up on your head. Did your mom help you with it?”
Tal laughed. “No. But Mom is teaching me the fine art of hairstyling. I can clean up every once in a while, Lockwood.”
Wyatt chuckled, releasing one hand and bringing over a chair next to hers at her desk. “You did this just for me, darlin’?” He led her over to her chair, watching her limp as she walked.
Tal carefully sat down. Her ankle wasn’t flexible yet, as much as she wished it was. She watched Wyatt take off his leather coat and absorbed his powerful chest and broad shoulders. He hung it on the back of his chair and sat down, his gaze pinned on her. Tal could feel him intently checking her out. She’d missed that, and it felt good to have that kind of caring aimed directly at her.
“All for you, cowboy. I usually wear jeans and a long-sleeve tee, if you want to know the truth. We were going to pick you up at the airport in a couple of hours and I wanted to look nice for you.”
“You do.” Wyatt gestured to her ankle. “You’re limping pretty well, too. How’s the physical therapy going?”
Tal pointed to the cane leaning against her desk. “I’m supposed to use that when I walk, but I hate it. I’m just not going to do it, Wyatt.” She saw him nod and give her a sympathetic look. “I do PT three times a week. My ankle’s still pretty stiff but slowly responding over time. Not fast enough for me, though.”
“It’s tough for a racehorse to suddenly be put out to pasture when she’s used to winning her races.”
Tal leaned back in her chair. “Yes.”
“How’s the transition been going for you as the new CEO of Artemis Security?” Wyatt asked. “You don’t say much in our Skype calls or in emails.”
“Because it’s all top secret.”
“Yeah, I got that.” Wyatt looked around, approval in his expression. “Nice digs. State-of-the-art, from the looks of it.” He gestured toward the huge windows. “Bulletproof glass, to boot. Nice call.”
“Yes. We’re on full alert at Artemis.” She frowned. “Even though we’re camouflaged as a working hydroponic organic farm, one of our many enemies might one day find out where we’re operating and try to destroy us.”
“Yeah,” he said heavily, “I know. So, you got the latest materials to make this place less visible to passing satellites?” He peered up at the ceiling, checking it out.
“Yes, we’re completely immune to any unwanted invasion by electronic device, drone, laser, infrared, heat sensors, or satellite snooping with their facilities. The walls are made of the latest composite material. They won’t find us from the sky or by using their ground-search instruments.”
“Good,” Wyatt murmured. “I want you safe, darlin’.” 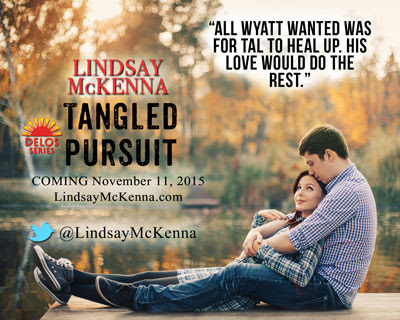 Lindsay McKenna lives her life as a risk taker, and it shines through the books she loves to write: romance, adventure and suspense. She started writing at age thirteen and continues to hone her writing skills to this day. She sold her first romance novel in 1981. The rest is history.


Because she went into the military, this experience became the backbone of her writing—she is credited with writing the first military romance novel (Captive of Fate, 1983, Silhouette Special Edition) and has created a thriving sub-genre within the romance field! As a New York Times Best Selling author, she has sold 23 million books and in 32 foreign languages in her career thus far. Her many experiences in the U.S. Navy are backdrop for her understanding of the military in general, and also her very successful Morgan’s Mercenaries, which is an ongoing series in Silhouette
to this day! Forty-five books strong!
Lindsay has gone Indie in 2015 and has created a new family saga on par with Morgan’s Mercenaries It is known as the DELOS SERIES. There will be paperback and eBooks created under Blue Turtle
Publishing, her company for her fans. Readers who love Morgan and his family are bound to fall in love with the Culver family. Delos is romantic suspense, which Lindsay is well known for. It took her five years to create and bring DELOS to her readers. It was worth the wait, but we’ll let you decide that.
Lindsay loves to hear from her readers and loves to know what they’d like to see her write next. Stay up with the latest on the Delos Series here. Please visit her Web site at www.lindsaymckenna.com. And be sure to sign up for her free quarterly newsletter. It contains exclusive content found nowhere else on the Net. Plus,
giveaways and other surprises, to her loyal and faithful subscribers!

Don't miss the first in the DELOS Series,