COMING APART AT THE SEAMS By Jenna Sutton ~ GIVEAWAY

Enter to Win a Kindle Fire HD 7" and Kindle Ebook of ALL THE RIGHT PLACES. Please use the RaffleCopter below to enter. You may increase your chances of winning by visiting the other tour stops. You may find those locations here.

Love can take some time to break in...

Teagan O’Brien, heiress to the Riley O’Brien & Co. denim empire, is anything but a spoiled rich girl. She’s worked hard to secure her place in the family business and can hold her own, in and out of the office. Only one man has ever been able to get under her skin—sexy football star Nick Priest. Years ago they crossed the line from friends to lovers, but he left her heartbroken. Since then, she’s been determined to keep him at arm’s length—no matter how tempting he looks in his jeans...

Nick has fortune, fame, and looks that make most women hot and bothered. But he doesn't have the woman he really wants. He knows he screwed up when he walked away from Teagan, and now that he has a second chance, he’ll do whatever it takes to win her over—no matter how tongue-tied he gets...

What? No, you don’t!
Her robe fell open as she measured coffee into the coffeemaker, and he exhaled, in relief, not disappointment, damn it, that she wore something underneath it. But then she turned to fill the coffeepot with water, and he got a good look at her pajamas. A scrap of black material barely covered her tits, and a tiny pair of matching shorts barely hid her crotch.
The color made her skin look like fresh powder at his favorite ski resort, and he could see the hard points of her nipples against her top and the enticing indention of her belly button above the waistband of her bottoms.
He tore his eyes away, but it was too late. The hard-on he’d woken up with had returned, and he cursed under his breath.
Her head jerked toward him at the sound, her eyebrows winging up her forehead. “What?”
“Nothing,” he mumbled.
He enjoyed Teagan’s company, but if his body kept acting this way whenever he was around her, he was going to have to stop hanging out with her. It was impossible to avoid touching her altogether, and walking around half hard wasn’t comfortable.
He’d always had complete control over his body, unlike his mouth, and he didn’t know why it got excited around Teagan. She was his friend and his best friend’s little sister.
He’d been having sex four times a week, sometimes five, with a couple of women he’d met at the gym, so it wasn’t as if he were sex-deprived. He might need to add another woman to the rotation, maybe someone dark-haired and blue-eyed.
Teagan pulled her robe closed and cinched the tie around her waist before leaning against the counter. She yawned, not one of those delicate ones that women give behind their hands, but a jaw-popping one. 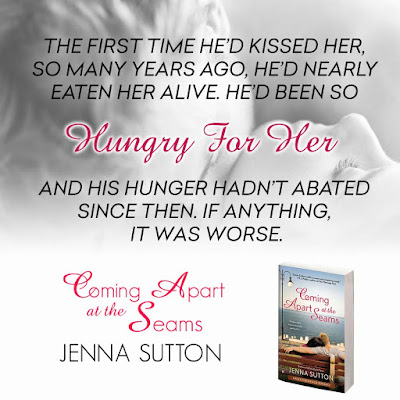 Jenna Sutton spent most of her career as an
award-winning journalist covering business-related topics including healthcare,
commercial real estate, retail, and technology. Nowadays she writes about hot,
lovable guys and the smart, sexy women who make them crazy. It’s the
culmination of a lifelong dream, and she feels so lucky to be able to do it.

Jenna has a Bachelor’s degree in Journalism from Texas Christian
University and a Master’s degree in Integrated Marketing Communications from
Northwestern University.

Jenna and her husband live in a 103-year-old house in Texas.

Posted by Reviews By Crystal at 12:55 AM