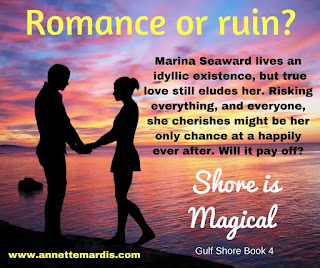 Crystal: I am so EXCITED to have Annette Mardis visit today. Welcome Annette!! Would you share a little bit about yourself with us today?

Annette: First, thanks so much for hosting me, Crystal. I’m a native Floridian, born in St. Petersburg, and have spent most of my working years as a newspaper journalist, writing and editing. I’m married; have two stepchildren and two grandchildren; enjoy rooting for my Tampa Bay area sports teams and NASCAR driver Jimmie Johnson; am an avid reader; and am the “designated sightseer” on the back of my husband’s Harley-Davidson motorcycle. I also volunteer at Clearwater Marine Aquarium, where the “Dolphin Tale” movies were filmed, and made a brief appearance as an extra in “Dolphin Tale 2.” I volunteer for the aquarium’s Guest Experience department, leading tours, doing presentations and teaching guests about our rescue and rehab mission and our animals. I’m also on the Rescue Clearwater team, which rescues sick and injured dolphins, small whales, river otters, sea turtles, shore birds and manatees.

Annette:  I’d love to. This is a snippet from my latest release, Shore is Magical, Gulf Shore Book 4, from the chapter in which Kenshin first encounters Marina in very enticing human form. This scene takes place in the marine animal hospital at Gulf Shore Aquarium, where Kenshin works. He thinks he’s helping to rehabilitate a rescued dolphin, but he gets the surprise of his life one night:

Looking up, Kenshin almost dropped his phone. He stared, eyes wide, mouth open, as a lithe form emerged from the pool, water cascading down her body. Where had she come from and, more importantly, why was she naked? Then he glanced behind her and received his second shock.
The rescued dolphin was — gone. Impossible. He gave his cheek a light smack to make sure he hadn’t succumbed to exhaustion and passed out. That was entirely possible, given he hadn’t slept more than two hours at a stretch since leaving Erica’s bed.
If this was a dream, it was incredibly realistic. Off the charts sexy, too.
The woman sauntering toward him was hotter than an egg yolk on Florida asphalt in August. Her shoulder-length brown hair framed a pair of turquoise eyes that shimmered like the sea. Her rosebud nipples all but begged for his touch, and he imagined himself at home between her long, supple legs, which were as toned as the rest of her.
The corners of her lips tipped up as if she’d read his mind. Kenshin’s gaze darted around the rehab unit, looking for backup if he needed it. But Kelsey had gone home early for a change, Flipper probably was loading up on caffeine and carbs, and Sitara was in her office catching up on paperwork.
Kenshin’s carnal fantasies dissolved amid concerns about a massive security breach.
“Who are you, and why are you here?” he demanded.
“You know who I am.” The woman’s voice was as smooth as spiced rum sliding over ice cubes. “You just don’t want to admit it.”
“What are you talking about?”
“Your friends brought me here from the beach, jostling me around in that canvas thing. What do you call it?”
“Are you talking about the sling?”
“It felt like they dragged me across a rocky sea bottom. Very bad for the delicate skin.” She pouted and pointed to a chafe mark on her elbow. “Get something softer, for Poseidon’s sake.”
“This is...insane. Why aren’t you wearing clothes?”
She shrugged. “I didn’t bring any.” Cocking her head, she studied him for a moment before her expression turned playful. “Don’t you like me as I am? I thought the males of your species enjoyed seeing females without garments.”
What an odd way to say that guys lust after naked women.
“You’re beautiful, and I think you know that, but it’s beside the point.”
“Is it?”
She’d come close enough for Kenshin to stroke a hand down all that lush, bare flesh, and he almost did so to make sure she was real. Common sense kicked in before he acted on the impulse. Besides being a stranger, she was, well, strange.
“Listen, lady, I don’t know what your game is but —”
“Game? There is no game. Your people rescued me, and now I’m your responsibility. Isn’t that how this works?”
Kenshin glanced around again, convinced that any minute Flipper or someone would leap out and scream, “Gotcha!” This had to be a prank. Stuff like this didn’t happen otherwise, at least not to him. But after that dolphin encounter at the reef, anything seemed possible.
Kenshin felt her warm breath on his face. It smelled...fishy? When he wrinkled his nose, she clapped her hand over her mouth. Now she was self-conscious? He looked into her eyes, an inviting shade matched only by a secluded tropical lagoon.
“What’s your name?”
“Marina.”
“Marina what?”
“Just Marina.”

Annette: Have you ever jokingly tossed out an idea … and it turned out to be just what you needed? That’s how Shore is Magical, my first paranormal romance, was conceived.
I was doing an online chat with other authors when the subject turned to paranormal novels, particularly shape-shifters. Confession: I haven’t read too many of those books, usually preferring reality (or a reasonable facsimile of it) over fantasy.
The other authors were discussing the merits of the animals usually favored in shifter novels: tigers and other big cats, bears and wolves, primarily.
“How about a dolphin shifter?” I kiddingly suggested in full smart-aleck mode. Dolphins are one of my favorite animals and have been since I was a little girl who listed Flipper at the top of her must-see TV list.
Surprisingly — to me anyway — the other chat participants quickly and enthusiastically chorused their approval of dolphin shifters. So I thought, why not?

Annette:  Shore is Scrumptious, Gulf Shore Book 5. The leading lady, Helen Holt, writes about Gulf Shore Aquarium and conservation issues for the local newspaper, the Gulf Shore Messenger. Rico Pellegrini is a chef and restaurant manager who is overseeing the creation and opening of a new eatery on aquarium property. While Helen finds him attractive, she can’t act on it because it’s unethical to date someone she’s writing about. Even if they can overcome that hurdle, shadowy figures from Rico’s past may just try to derail his happiness.
The book will feature not one but two weddings — Jo Tompkins and Kelsey Kramer, and Evan Sanders and Danielle “Dani” Davidson. I hope everyone will drop by www.facebook.com/GulfShoreWeddings/ and help me create a special day for these two couples.

Annette:  I usually work on my laptop while sitting on my living room couch with my feet up, my two dogs somewhere nearby and my pet parrot, Ozzie, in the cage next to me. When you work for a newspaper, you learn to concentrate despite a lot of noise and activity going on around you, so I’m not a writer who has to lock myself in a room somewhere. But when I do need quiet, I’ll take my laptop out to my sunroom and write from my massage chair.

Crystal: Did you have to do a lot of research for this book or any other? If so, do you have a fascinating fact that you have learned that you would like to share with us?

Annette: I’ve learned so much through my volunteer work at Clearwater Marine Aquarium, not just about the animals but about how an aquarium operates. I’ve been there more than four years and have no plans to stop, so in essence I’m doing research every time I walk through the door. I also spend a fair amount of time looking things up online. While my books are fiction, authenticity is very important to me, especially with my journalism background.
I could spout fascinating facts all day — I love learning about marine life — but I’ll give you one: When dolphins sleep, one half of their brain rests while the other half stays awake so they can swim, breathe, and be alert for potential danger. They have to maintain a certain consciousness to rise to the surface and breathe.
By the way, dolphins have bigger brains than we do. That doesn’t necessarily make them more intelligent, based on our definition of intelligence, but they are most definitely one of the smartest animals on Earth.

Crystal: Who are some of your favorite authors?

Annette: I have so many and add to the list all the time. Among those are Kristan Higgins, Kristin Hannah, Fannie Flagg, Catherine Anderson, Robyn Carr, Julia London, Kat Martin, Diane Hammond, Mariah Stewart, JoAnn Ross, Marilyn Pappano, Mary Alice Monroe, Debra Salonen, and of course all my “pub sisters” at Liquid Silver Publishing.

Annette: I’ve written a satirical children’s book that I hope to find a publisher for someday. It’s about a group of fifth-graders who imagine that the lunch ladies at their school are aliens plotting to take over the planet. I also would love to do something for children or teens related to marine animals and conservation. 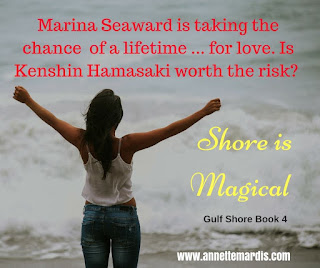 After suffering losses that would’ve wrecked a lesser man, Kenshin Hamasaki has resigned himself to a life without true love. His perpetual grumpiness has damaged the few friendships he’s managed to forge, and his dalliances with women are superficial at best.

And then comes a chance encounter with a mysterious stranger named Marina, whose mere existence defies logic. She’s led what many would consider an idyllic life, but one that’s shrouded in secrecy. Marina longs to experience the limitless possibilities of Kenshin’s world. Yet, sharing the truth about herself could place her entire species in peril.

These two searching souls are drawn to each other by an animal attraction with the potential to change them in ways they never could’ve imagined. Lurking in the background, however, is a dark presence from Marina’s past, who threatens to end this unlikely pairing before she and Kenshin can fully explore whether they’re destined to be together.

**Note from Crystal: I am reading this book right now and loving it! Stay tuned for my review soon. 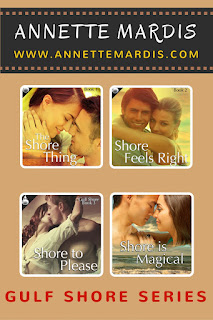 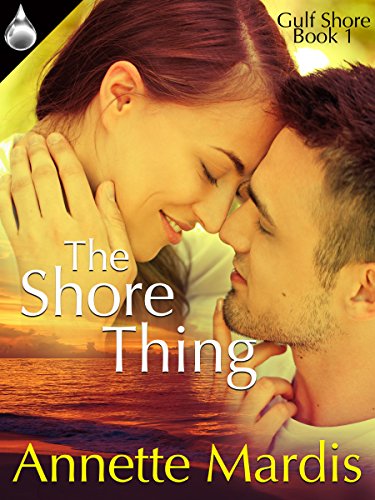 Shore to Please Amazon Buy Link
Posted by Reviews By Crystal at 9:19 PM

Email ThisBlogThis!Share to TwitterShare to FacebookShare to Pinterest
Labels: @AnnetteMardis48