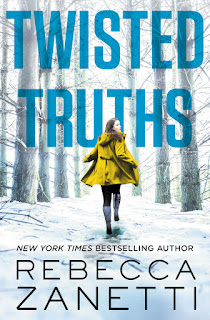 One year ago, Denver Jones blew up his life and left everything behind. To stay alive, he had no other choice. But now, when video footage of the woman he could never forget goes viral, begging for his help, he has no choice but to go to her. Her niece has been kidnapped and Denver and his blood brothers are the only people she can trust.

But Denver isn't the only one watching that video. The deadly forces from his past see it too-and they'll use anything--and anyone--they can to lure Denver out of hiding to exact their revenge.

The Series:
Series Page on Goodreads

Rebecca Zanetti is the author of over twenty-five romantic suspense, dark paranormal, and contemporary romances, and her books have appeared multiple times on the New York Times, USA Today, and Amazon bestseller lists. She has received a Publisher's Weekly Starred Review for Wicked Edge, Romantic Times Reviewer Choice Nominations for Forgotten Sins and Sweet Revenge, and RT Top Picks for several of her novels.  She lives in the wilds of the Pacific Northwest with her own alpha hero, two kids, a couple of dogs, a crazy cat...and a huge extended family.  She believes strongly in luck, karma, and working her butt off...and she thinks one of the best things about being an author, unlike the lawyer she used to be, is that she can let the crazy out. Find Rebecca at: www.rebeccazanetti.com

Posted by Reviews By Crystal at 3:42 PM