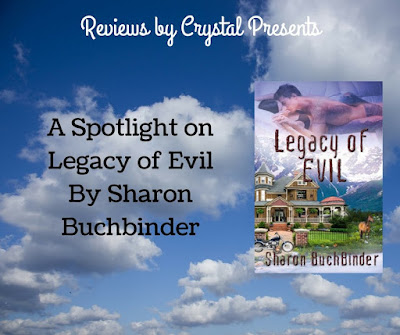 Legacy of Evil
By Sharon Buchbinder

One battle, one outcome. Who will win? Good or evil?

When a wild mustang is shot in Montana, renowned horse whisperer and telepath, Emma Horserider, is called in to calm the herd and find out what happened. Once on scene she is almost killed by a bullet-spewing drone, and calls her black ops brother for back-up.

Emma's help roars into her life covered in tattoos and riding a Harley. Remote viewer Bronco Winchester takes the assignment because he is ordered to, but he wonders what type of assistance, his boss's sister needs. That is until he sees Emma, a valiant Warrior Woman proud of her Crow heritage.

Posing as a married couple, Emma and Bronco go undercover to infiltrate and stop a hate group. Both are anxious enough without the now growing attachment they feel for one another. When the lives of many are on the line, they are not sure if they will live or die—let alone have a chance at love.

Bronco now stood squinting in the late afternoon sun, knocking at a door with no bell,  and  waiting  for  a  response.  Dogs  barked  and a window  curtain  twitched.  Good.  Someone  was home. He adjusted his pack, leaned his head back, closed his eyes, and said, “Any time now.” As the words slid out of  his  mouth,  he  heard  the  unmistakable  sound  of a shotgun being pumped.
Uh. Oh.
He raised his hands. “Don’t shoot. I’m unarmed.”
Turning slowly to face his fate, his jaw fell open, and his  heart  rate  kicked  up  a  notch  from  being  on  thewrong end of a shotgun or from the weapon holder’s looks, he wasn’t sure. A raven haired Amazon in a tank top,  jeans,  and  metal  tipped  cowboy  boots  held  the Mossberg 500 in a perfect military stance. Long strands of hair blew across her face in the hot breeze. A large purple  bruise  bloomed  on  her left cheek. She squinted her dark brown eyes and gave him a laser-beam once over from his dusty black boots to his sweat soaked do-rag.
“Who are you, and what do you want?”
If he hadn’t been so intent on not getting killed, he would  have  spent  more  time  staring  at  those  full, luscious,  kissable  lips  and  thinking  about  how  she would taste. As it was, he guessed he had less than a minute to respond before getting blasted into the next county.

Sharon Buchbinder has been writing fiction since middle school and has the rejection slips to prove it. An RN, she provided health care delivery, became a researcher, association executive, and obtained a PhD in Public Health. When not teaching or writing, she can be found fishing, walking her dogs, or breaking bread and laughing with family and friends in Baltimore, MD and Punta Gorda, FL.

Email ThisBlogThis!Share to TwitterShare to FacebookShare to Pinterest
Labels: @WildRosePress