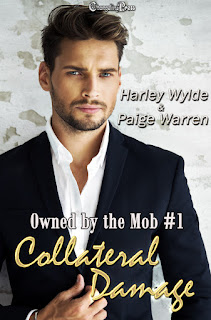 Power. Money. Fear. I’ve wielded them all. But not with Cerys. My angel, my light. My everything.

Cerys: Blind since birth, I’ve learned the hard way I can’t rely on my father. When he gets in too deep with the wrong sort of people, I find myself the property of Viktor. I’ve heard whispers of the mob and what they’re capable of and know I should be terrified, but it doesn’t take much for me to fall for Viktor. I see a side of him he seems to show only to me. His kisses make my knees weak, and just one touch makes me dream of forever. He makes me feel… special. Precious. Important. But what would a man like him want with collateral damage? He can have any woman he wants, and probably has. I don’t see a happily-ever-after in our future, no matter how much I might want one.

Viktor: Death and destruction cling to me, blood and violence just a way of life. I didn’t climb my way toward the top of the Bratva by being a saint. I may be gruff and dangerous, take what I want when I want, but when it comes to Cerys, I find that I can’t be harsh with her. She’s gentle. Sweet. An angel. My myshka. She’s the light to my darkness. Now that I have her, I know that I can’t let her go. I’ll make her mine in every way possible. Only one problem. Artur Orlov. He wants me to marry his daughter, but I won’t. I didn’t count on him retaliating by taking my myshka from me. I’ll get her back, and if she’s been harmed in any way, I won’t stop until every last man responsible has breathed their last.

WARNING: This story contains adult content, including language and violence that some may find objectionable. 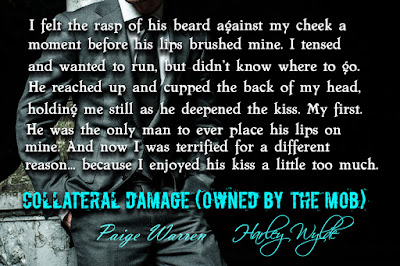 Paige Warren is a contemporary romance author who believes in happily-ever-after for everyone. Sexy, steamy stories about mobsters, cowboys, inked bad boys, and interracial couples…sometimes with a bit of kink. If you like alpha heroes and strong heroines, then you’re in the right place! No matter the odds, in a Paige Warren book, true love conquers all.

When her husband, children, and furbabies aren’t demanding her attention, she’s typically either writing or reading. Paige enjoys reading a variety of genres from young adult books, to general fiction, and of course romances! But when it comes to movies, she’s a big-time horror fan – especially the 80’s slasher flicks. That being said, ghostly movies are her favorite regardless of when they were made, like Rose Red or The Amityville Horror.

Find her online at: paige-warren.com

When Harley's writing, her motto is the hotter the better -- off the charts sex, commanding men, and the women who can't deny them. If you want men who talk dirty, are sexy as hell, and take what they want, then you've come to the right place. She doesn't shy away from the dangers and nastiness in the world, bringing those realities to the pages of her books, but always gives her characters a happily-ever-after and makes sure the bad guys get what they deserve.

The times Harley isn't writing, she's thinking up naughty things to do to her husband, drinking copious amounts of Starbucks, and reading. She loves to read and devours a book a day, sometimes more. She's also fond of TV shows and movies from the 1980's, as well as paranormal shows from the 1990's to today, even though she'd much rather be reading or writing.

You can find out more about Harley or enter her monthly giveaway on her website. Be sure to join her newsletter while you're there to learn more about discounts, signing events, and other goodies!

Find more from Harley at: harleywylde.com 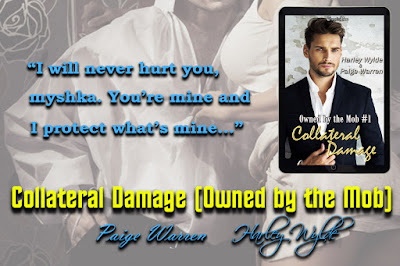 Posted by Reviews By Crystal at 1:45 AM