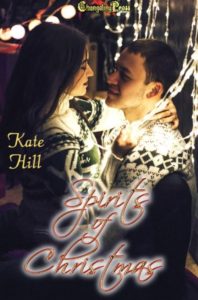 About Spirits of Christmas:

On Christmas Eve twenty-five years ago, a brutal murder was committed at the house where Christa Wild works as a live-in maid. When the other servants leave for the holiday this year she stays behind, hoping that any spirits dwelling there will help her regain the psychic power she lost. She’s surprised when the intriguing but disturbed owner of the house appears several days before Christmas.

Action star Joel Connor has kept a terrible secret for most of his life. Despite his success as an athlete and actor, he is plagued by flashbacks of a gruesome attack that destroyed his family. This Christmas, Joel returns to the house where it happened to face the ghosts of the past, but finds he is not alone.

Joel and Christa are instantly attracted, but will his psychological state prevent them from finding peace and love?


Excerpt from Spirits of Christmas:

In the living room, Christa collected her Christmas decorations and placed them in reusable shopping bags. She wasn’t tall -- maybe five three -- but had gorgeous curves. Nothing felt better than a girl with padding. He glanced discreetly at her rounded bottom as she leaned over to unplug a plastic light-up reindeer.

“What are you doing?” he asked, wondering if she had decided to leave after all.

She glanced at him with big blue eyes. “You said the decorations are atrocious, so I’m putting them away. It’s your house.”

He furrowed his brow and shook his head. “Leave them. I don’t like Christmas.”

“Then why would I leave them?”

“You must like them. They don’t bother me.” He was lying. The house had been decorated on the night it happened. His mother had loved Christmas and always put up lots of decorations. They always had a huge tree that made the entire house smell like pine, but since that night twenty-five years ago, he couldn’t smell pine without smelling smoke and plastic tape.

“Are you okay?” Christa touched his arm.

He glanced into her concerned eyes. “Fine. Why?”

“You got really pale just now. Are you hungry maybe? I made cookies.”

“I don’t eat sugar.” He pulled off his gloves and stuffed them into his coat pockets before taking off his coat and tossing it onto the nearest chair.

“Then you’ll love these. The recipe is from my cousin, Mysti. She tries all these healthy dessert recipes. This one has no added sugar and no artificial sweeteners. They’re gluten free. Dairy free. Her husband jokes around that they’re taste free, but it’s not true. They’re really good, and I’ve been trying to lay off sugar, too. Except for French toast. I love that with maple syrup.”

“I don’t usually eat bread. I’ve been on a strict diet for a movie.”

“That must stink. I’d never want a job like that. When I want to be a glutton, no one better try to stop me.”

He laughed. From the few minutes he’d known her, he guessed that no one had better stop Christa from doing anything she set her mind to.

“That’s better. At least you’ve got some color back. For a second I thought you might hit the floor. You know, if you’re hungry, I can make you something other than cookies. I’m a maid, not a chef, but I can still cook pretty well. No bread. No sugar. How about a salad and chicken? I hear chicken is good for people on diets. I still can’t believe you need a diet.” She wrinkled her little upturned nose and glanced at him up and down. “You’re wicked lean. What are you playing?”

“I’m a former spy who gets into underground MMA fights to find my kidnapped twin brother, and I can’t say anymore about it or I’m in breach of contract.”

“Oh wow. I know my brother will be seeing that one. He’s fifteen and all about martial arts. He’s been training since he’s ten.”

“That’s great. I was about that age when I started. It changed my life.”

“Obviously. Not everyone is as successful at it as you are, though.”

“It doesn’t matter. It teaches focus, discipline, self-confidence, creativity. It’s great for kids. Wouldn’t you rather spend Christmas with your brother than here?” 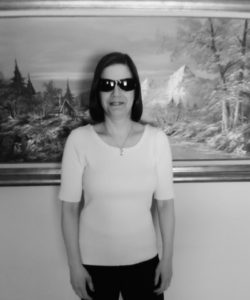 Kate Hill is a vegetarian New Englander who started writing over twenty years ago for pleasure. Since 1996, she has sold over one hundred short stories, novellas, and novels.

She prefers to blend genres, and she loves horror and a happily ever after, so her books can be a bit unusual. If you're looking for romance with witches, aliens, vampires, angels, demons, shapeshifters and more, there's a good chance you'll find something to your taste in her backlist.

When she's not working on her books, Kate enjoys reading, working out, and watching horror movies. She also writes under the name Saloni Quinby.

Posted by Reviews By Crystal at 3:33 AM