DESTINY IS IN THE BLOOD

GAILENE’S VOW is the delicious, but tormenting tale of two women as they become vampires. Gailene must rise from devastation, rage, and vengeance in 1790s rural England, leaving her human family to become a powerful vampire matriarch in fledgling America. Two centuries later, college coed, Zondra, discovers she’s the leader of her grandmother’s empire when she begins turning, though never bitten. Gailene’s story unfolds to Zondra through their familial blood, revealing the tragic destiny, but poignant love both women have for Jeremiah. He lives in anguish while preparing Zondra to protect her new family against the retribution of Gailene’s creator.

My scream choked off as if frozen in the air along with the white puffs of my breath. Terror forced my ice skates out across the frozen pond, blood pounding in my ears with each thrust of my legs. When I chanced a glance back, he was impossibly gone from the wide-open ice. The Washington Monument, sleek and barren of emotion, loomed ominously above the trees in the distant grey dusk. Despair engulfed me as I jerked my eyes forward, flooding my mind with prayers that went immediately unanswered: his horrid, insipid gaze was just inches from my face.

He glided backwards on the ice as fast as I skated forward, though he wore no skates and his body showed no motion. His voice entered my mind: I’m going to taste you, Zondra. I tried desperately to stop, but slid into his outstretched arms and legs that wrapped about me like a lover, drawing me to him. I arched away, pushing against his chest as he bent toward my neck, mouth opening horridly wide as slender fangs seemed to materialize with a sound as soft as a breath.

His pallid face passed my vision when his cold hand angled my head to the side­and that’s when I saw him, just a blur of color, nothing really to focus on. In an instant, he was across the pond and upon us. The one who held me yelped, almost bird-like, when something snapped by my ear. Cold viscous liquid blasted the side of my face, my eyes­then the ice broke.

As I slid into the black water, I saw two others, lips curled back, talon-like teeth bared, collide with the one who had come to aid me. For that frozen moment his face turned toward me and I knew what should be unknowable: that I was, and always had been, his. 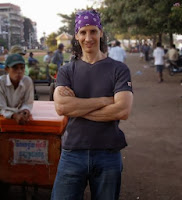 Stuart is a novelist, screenwriter, and sculptor.
His story ideas come from his vivid imagination, but his inspiration draws from extensive world travel and fascinating careers: from US military medic to hairstylist, then Washington D.C. Police officer to NYC photographer.
Later, Stuart converted a chicken coop in the woods into a live-in studio and taught himself metal sculpture. That rudimentary craft expanded into the fine arts. Sculptures in bronze and fiberglass led to shows in the US, England and Thailand.
My passion for all arts segued into: costume design (top 100 designers in the book, Fashion: 2001); modeling agency art director; fashion show designer; water feature designer, computer illustrator, and a top sculptor for special effects, sets and props in the entertainment industry with work in over thirty major films, hotels and theme parks worldwide.
During Stuart’s film career, he learned screenwriting firsthand by pestering the many actors, directors, and producers whose films he worked on, as well as attending many writing and directing workshops. To explore character and environment more, he took up narrative fiction. Stuart Land has published 8 novels, and written 18 screenplays.
He continues on the journey.

In SZEJNA’S REVENGE, the astounding conclusion that played out in GAILENE'S VOW threatens to tear apart the vampire nation, and start a global war with humans. Only Szejna, a vampire who looks 18, but is so old she's lost her memory, has the solution to the coming Armageddon. But to find it, she must share her blood with her nascent protégé, Zondra, and together, journey back thousands of years to ancient Rome. In the present, while Szejna teaches Zondra how to use her unique abilities, they unintentionally resurrect dreadful vampires from beyond death, bent on retribution and world domination.

Rough breath panted at Gailene’s ear in rhythm with her racing heart. Her body, coated in a sweaty sheen, glowed in candlelight as she slid upon another in pulsing cadence. Arms and legs tangled, fingers reaching for one another. Glorious moans escaped lips with each breath, while salt burnt eyes and flavored roaming tongues.

Gailene drew herself up to ride Fenton in full gallop. By the same wavering light from the hearth that threw her lithe silhouette onto the log and mortar wall of the cabin, Fenton’s powerfully cut features stood out in sharp relief. The hard straight edge of his nose that settled into hollowed cheeks gave him the air of a Greek warrior from which he laughingly swore descendancy. However, the fire in his swarthy eyes betrayed Spanish heritage. Except in name, there seemed nothing English about him. It was staring into those eyes that weakened her resolve and made her wet.

She arched her back away from the overpowering fireplace heat to meet the cool air of the room that flowed down over her face and breasts, renewing her. Rocking hard against Fenton’s thighs, she ground down while he plowed up deep into her. Each thrust was like cannon fire between her legs, unifying their rapturous screams.

Gailene collapsed onto Fenton with a sigh. He stroked her hair and whispered into her ear. “Why the lament, dearest? Do our rendezvous upset you so?”

“On outset, I am eager, but on conclusion, there are regrets.”

“Then why don’t you come and stay with me? By God’s truth, I can care for you better than Kerrick.”

She rolled off him onto her back, staring at the shadows jumping on the ceiling from the firelight. “He is my husband and I love him. You are his best friend and should love him also.”

Fenton turned on his side to study her silhouette and the now steady rise and fall of her breasts. Her skin, as smooth and white as a dove’s breast, begged to be touched, but her deep jade faraway eyes, naturally defiant, kept everyone at bay but for him and Kerrick. Her lips, full and always flush, cut to a fine taper where they met her cheeks. Hers was a mouth that drew attention in its serenity, a mouth that rarely smiled. But it had always smiled for him.

“I do love Kerrick, as a man can love a brother, and you know the truth in that.” He ran coarse fingers over the tender skin of her cheek. “But I love you more, my Gailene.”

She batted his hand away as if it were a mouse fallen from the rafters. “Just stop that talk, Fenton Ryder! You don’t love me and I am not yours to love.”

Sitting up, he grabbed her hands. “Then why do you call me to you? Are you so fond of torturing me?”

She pulled away, slipping off the bed, her thatch of red hair seemingly igniting from the firelight as it slapped against her back. “Me thinks I torture myself all the more for these rendezvous. I feel but a harlot at these times.”

Fenton reached for her, but she stepped further away into the shadows. “Please, darling, don’t speak of yourself as such. We’ve held company since we were children.”

“How can I not, when I desire your sex so strongly, the same as any streetwalker.” She came back to the bedside and took his hands. “T’were better we finished such trysts and live blamelessly.”

Alarmed, Fenton sprang from the bed to gather Gailene in his arms. “You cannot mean it!”

She pushed against his comfort. “I’ve made up my mind.”

“This isn’t about our wants, Fenton. Our desires are wrong, and we both know it.” She pushed harder against his still wet chest. “Release me and don your clothes.”

Fenton’s will dissolved and his arms fell to his sides. His powerful muscles were no match to Gailene’s resolve. He felt like a boy before his scolding mother, powerless and guilt ridden.

She went to the washstand and poured water from the clay pitcher into the plain ceramic bowl. “Get dressed, Fenton. Kerrick arrives home come morn.”

He gathered his clothes, and pulled them on as he watched her wash. His heart and loins ached for her, but talking was useless now. Another month, maybe, but not now. In minutes, both stood dressed and silent at the threshold. Fenton went to embrace her, but she moved back. He couldn’t even gaze into her eyes for she hung her head low. He swept his dagger and flintlock pistol off the side table and stuck them in his waistband, then took up his sabre from its perch by the door and affixed it to his belt.

While his hands were busy at that task, Gailene stepped in and embraced him, trapping his arms. “I do love you, Fenton, and this will not change. But please, I beg of you, go back to being Kerrick’s true friend and leave me to be his true wife.”

She stepped away and with great difficulty, pulled her wet eyes up to his. His strength to oppose multiple adversaries in combat was not sufficient to keep the tears from his eyes. Forcing his words was harder than facing death. “I will abide by your desire, my­”

He stood motionless, lost in the universe of his empty heart, then leaned forward and brought a handful of Gailene’s hair to his face, inhaling its fragrance for the last time. Within the moment, he was out the door, swallowed by the darkness. Seconds later, the whinny of his horse and sudden thumping hooves, were testament to his painful departure. When the horse’s rhythmic clomp died away, Gailene fell against the door, pushing it shut as she crumpled to the floor. Shaking in silence, she bit back the tears until her screams of agony and regret finally escaped.