Emelle will award a signed paperback of MOLLY HARPER with bonus novella DUETS included (US ONLY) to THREE randomly drawn winners via rafflecopter during the tour. Please click here to see other stops on this tour.

Movie star Molly Harper has it all, beauty, success in her field, and a loving family and marriage to actor Ben Delmonico. Norma Wintz, Molly’s mother, has it all, a lovely life style and two children who adore her, and a respite from the battle against cancer she’s been fighting. Anne Sullivan, at age fifty, is optimistic that her move to sunny Santa Barbara, California, will allow her to be closer to her youngest son and his family, and help her start her life anew after the death of her beloved husband.

But all three of these women, despite their considerable blessings, are plunged into turmoil when the most intimate of secrets that ties their lives together is revealed. At this same time, Molly Harper is confronted with the news that her marriage to actor Ben Delmonico is over. As she navigates this heartbreak and tries to keep the personal details of the drama off the front pages of the newspapers, Molly must also find a way to once and forever negotiate a way forward with her ex- lover and best friend, the volatile and compelling Cruz Morales.

How each of these characters handles the resulting upheaval in their own life, and in their relationships with one another, forms the compelling story of family, secrets and trust in the romantic women’s fiction novel, Molly Harper.

DUETS offers alternating looks into the lives of two women who would seem to have little or nothing in common.

Screen star Molly Harper has it all…beauty, success in her profession, a loving family and an upcoming marriage to actor Ben Delmonico. But as Molly is on the verge of marrying the man who has swept her off her feet, she still wonders if he hasn’t swept all her feelings for her first love away, Cruz Morales.

A handsome and cerebral college professor, Molly and Cruz have an on-again, off-again history stretching back to Molly’s early teen years. He’s not a man who a girl can ever forget about, and his feelings for Molly are equally conflicted.

Anne Sullivan, happily married for twenty-five years, is fighting to hold onto the man she loves, and hold off a confrontation that could shatter her family’s image of what they are. It involves the beautiful screen star and her mother, upper crust matron Norma Wintz, who Anne has traveled to California to meet under the most dramatic of circumstances.

Duets confronts the most intimate type of family secret that ties these two women’s lives together, just as chance events turn Molly and Anne’s worlds upside down.

Enjoy an excerpt from DUETS:

Molly Harper turned away at these words, knowing they more than likely preceded an indictment of her fiancé. Keep from showing you’re hurt, she told herself. But she knew disappointment had flashed in her eyes, and that her mother had seen it.

“Ben’s not what I think?” Molly stared outside as the limousine she and Norma rode in glided down Wilshire Boulevard, five miles from the brick-paved road leading to her mother’s neighborhood. “Why don’t you tell me what you think I think he is?”

“You think he’s a man like your father, a man inclined to put his wife’s well-being and his children’s needs before his own. Ben Delmonico is not that kind of man,” Norma said.

She turned and faced her mother. “I don’t think you know Ben well enough to say that. And honestly, I wish you had a little more faith in me. I gave this a lot of thought before I decided to marry him.”

“A lot of thought? You told me five minutes ago you said ‘yes’ the same night Ben proposed. I think you’ve agreed to marry him because you’re panicking.”

Molly sighed. She’d hoped Norma would be delighted by the news she was marrying a successful man, the gorgeous, Academy-Award-nominated actor, Ben Delmonico. A man known the world over for his sophisticated action movies and box office charisma. But it was clear Norma was not delighted.

Typical. Mother loves being contrary. And in control. “What am I panicking about?”

“About being thirty-two. About not having children. But mostly because Cruz Morales is seriously involved with another woman. And, as usual, when you panic you make impulsive decisions. I’ve seen you live to regret that several times.”

“That’s the most ridiculous thing you’ve ever said.” Molly’s took a breath. “When you told me a few weeks ago Cruz was involved with Shar, how did I act? I was happy. I told you to give him my congratulations! Cruz and Shar hooking-up has nothing to do with me deciding to marry Ben.”

“You know as well as anyone that Cruz and I have been over forever. He’s moved on, and I’ve moved on. We’re friends, but only that.” Heat bloomed on her cheeks and spilled down her neck.

“I don’t remember you being all that crazy about Ben before you heard the news about Cruz.” Norma tilted her chin up.

“Just because I don’t announce something to you, doesn’t mean it’s not true.”

“Ben and I have been dating for months. He’s a charming and generous man who convinced the studio to consider me for Traitor, risking his own chances for the lead. All my friends like him, Mom, both for himself and because he’s a wonderful actor.”

“Well, that is one thing we can agree on,” Norma said. “He is a good actor. So why not just make movies with him instead of marrying the man?”

“Those are not mutually exclusive. I’m marrying him and making a movie with him. Or have you forgotten I’ll be on set in Paris at Christmas?”

“Of course I haven’t forgotten that. It’s the first Christmas you won’t be home; thank you, Ben Delmonico.” Norma leaned closer. “I just can’t help but wonder if that movie isn’t what’s behind him proposing so suddenly. The wedding publicity is sure to make it a blockbuster.”

“For god’s sake, that’s just plain insulting. He didn’t ask me to marry him to get publicity.” Molly reddened again, remembering how Ben had said, two minutes after she’d accepted his proposal, “Our box office will be huge.”

“Let’s just drop this, Mom. We’re almost home and I’ve got a million things to do.”

The Lincoln slowed and turned onto North Highland, the main thoroughfare into Hancock Park. “Every time we come this way, I remember the day Charles and I brought you home, all those years ago. It was the biggest triumph of our lives,” Norma said softly.

“That’s a nice memory.” It was, but Molly knew better than to let down her guard.

“It is.” Norma turned to Molly. “Now look, obviously I can’t tell you what to do any more. But until you found out Cruz was moving in with Shar, every time you called home, you asked about Cruz first. Every time you came home, he was the first one you called. I think you’re still in love with him. And, despite his behavior, which might fool someone who hasn’t known him since he was a little boy, it’s clear to me that he loves you too. I think this relationship with Shar is a ruse to provoke you into finding a way to work things out.”

The limo rocked gently and the women’s shoulders brushed against one another. Molly ran her fingers through the wild blonde hair she was famous for. “You’ve just outlined a plot so pathetic it wouldn’t get made by the Hallmark Channel.”

“I like the Hallmark Channel. They make lovely movies, without all the naked fannies.”

“I like the Hallmark Channel too, but that’s not my point. Cruz wouldn’t be with Shar for any reason other than he finds her a good match. He doesn’t do ‘ruses’.”

“What’s he got in common with her?”

“They both work at the college and they’re both into books and the local arts scene. I bet she’ll finally get him to turn one of his ideas into a novel. I never could.” Molly’s voice wavered.

“See, that’s pain in your voice, not happiness. You shouldn’t be afraid of the truth about your feelings, whatever the cost.”

“Like you? Are you always completely honest, Mother? No matter the cost?”

Norma blinked. “What are we talking about now? What haven’t I been honest about with you?”

Molly looked down. Her question had surprised both of them and she wished she could un-ask it. Now isn’t the time to open that particular can of worms. 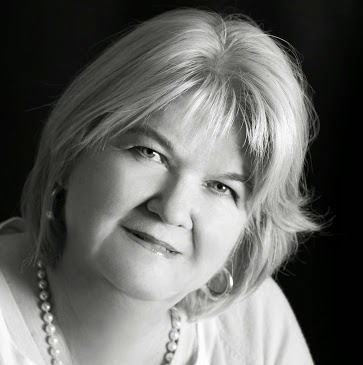 Emelle Gamble was a writer at an early age, bursting with the requisite childhood stories of introspection. These evolved into bad teen poetry and worse short stories. She took her first stab at full length fiction in an adult education writing class when her kids were in bed. As M.L. Gamble, she published several romantic suspense novels with Harlequin. She contracted with Soul Mate Publishing for Secret Sister, published in the summer of 2013, and Dating Cary Grant, an April 2014 release.

Once and Forever, an anthology which includes the novella Duets, came out on November 1st. Molly Harper, a full length novel starring the characters from Duets 3 years later was released by Posh Publishing in January, 2014. Duets is now available as a standalone novella. Emelle lives in suburban Washington D.C. with her husband, ‘Phil-the-fist’, her hero of thirty years, and two orange cats, Lucy and Bella. These girls, like all good villains, have their reasons for misbehaving.

Her daughter, Olivia, and son, Allen, are happily launched on their own and contributing great things to society, their mother’s fondest wish.

“Along with being a very unique and captivating plot, SECRET SISTER offers a shocking turn of the paranormal kind… This is a story of friendship, family, and most of all, true love and what those things can mean. I cannot recommend SECRET SISTER strongly enough… “ Fresh Fiction, Fresh Reviews

"I'll admit I grabbed this book for review more because Emelle Gamble had a story in there - I've loved her significant touch brought to family relationships in a previous book of hers that I've read, and I wanted to confirm if this sort of embroiled-relationships type of tale is really her niche or not. Turns out, it is!" Zee Monodee's Author's Corner reviews
MOLLY HARPER…

"MOLLY HARPER ...is the first book I've read by this author, but it won't be my last! Ms. Gamble does a wonderful job of drawing these characters and making them just leap off the page." Long and Short Reviews

"Fantasy and reality blend together in this mesmerizing tale from Emelle Gamble…It's not your typical romance, making it a breath of fresh air in a market currently inundated with new adult contemporary romances (which I do love, but need a break once in a while!). I continue to be a fan of this author..." Andi's Book Reviews

MOLLY HARPER, available in paperback and eBook at Amazon http://amzn.to/MOJUXa

a Rafflecopter giveaway
Posted by Reviews By Crystal at 1:00 AM