A Distant Voice
By Bridie Blake

Giveaway:
$25 Amazon Gift Certificate to one winner during the tour. Please use the RaffleCopter below to enter.

Crystal: Today I am honored to host  Bridie Blake. Welcome Bridie! I'm so happy to have you here today. Would you share a little bit about yourself with us today?

Bridie:I live in Melbourne, Australia with a dog who looks like she belongs in a Disney movie and is a genius when it comes to getting into mischief.
I'm one of nine so my childhood was spent playing with all my brothers and sisters. There was always something to do and some new game to try. And I'm now the proud auntie of fourteen nieces and nephews so it's a whole new generation to share my wisdom with. Which for now doesn't really go beyond 'read Harry Potter' but to me that's a very important piece of wisdom to pass on.
I work five days a week in an office job and spend the week waiting for the weekend so I can sit at my computer and write.
I have some very understanding friends who drag me out of hibernation when I need a break from writing. I’ve had many a Masterchef UK, Great British Bake Off and Nashville marathon with them, and I can’t forget our kitchen dance parties.

Bridie: I’m on the second draft of my current WIP. A contemporary young adult that follows a first year college student who, after a chance encounter with an A-list actor, is hired to pretend to be his girlfriend on a round the world movie premiere tour.
I also have an idea for a sequel to A Distant Voice. Once I finish the second draft of my current WIP, I’ll attempt an outline for that and see if there’s more than just an idea there.

Bridie: The idea for A Distant Voice came in two stages. I wanted to write a story about sisters and the bond between them and I wanted to pay tribute to my grandparents. And due to my obsession with the TV show Nashville, I wanted country music to play a part in a story. Luckily for me these things decided to work together and A Distant Voice was born.

Bridie: Oh boy, where do I start? If there’s one thing I absolutely need on hand when writing, it’s biscuits. I can’t have a coffee at my computer without biscuits. It just isn’t right. I’m not overly picky on the type of biscuit - it pretty much ends up being whatever is on sale at the shops that weekend. But I do have a soft spot for Tim Tams.

Bridie: I love this scene between Violet and Carter because it’s one of the first ones where she understands that in order to actually build relationships she needs to make an effort. And her attempt at apologizing is just typical of her character.

“Hi,” he said in a voice that reminded me of the first time I’d spoken to him in chemistry.
“I hear I missed one hell of a game last night.” He glared at me and I quickly realized that wasn’t the best choice for an opening line. Okay, try again. “I didn’t know how important football was to you. I should’ve gone to watch you.”
“Is that it?”
“What else do you want me to say?”
He turned back to his truck and rifled through his tool box. “I’ll see you around.”
I stared at his back with a sick feeling in my stomach. I didn’t want him to be angry at me. Hanging out with him made me feel almost normal again. Like I could be a teenager. “I’m sorry, okay?” I blurted out.
“Wow, that’s heartfelt,” he said.
I took a deep breath and tried to ignore his sarcasm. If I wanted him as a friend I had to be honest, or as honest as I could be, because he deserved that much. “I really am sorry,” I whispered and moved toward him. My fingers reached out to touch his back but I let my hand fall at the last moment. “I’m not good at being a friend. I didn’t have many so I don’t know how to do it.” I sighed. “Being a sister’s easier. Sister’s forgive without having to say sorry. We snap and argue with each other and then five minutes later it’s forgotten. I guess, I don’t know how to do it any other way.”
“Why didn’t you have friends?”
“Because I chose Rose.”
He nodded and stopped playing with his tool box, turning his head to the right so he could see me. “Will you come to my next game?”
I winced. I really didn’t want to go but his pleading eyes made me nod my head. God, he’s turned me into a softie. “Sure. As long as you promise not to ask me what I thought afterward. I don’t know the first thing about football.”
He grinned and nudged my foot with his. “I’ll add it to our study list.”
“Don’t even think about it.”

Bridie: I love to read so I always make time every day to do a little reading. When I take a break from writing on the weekends I try to catch up with friends, or hang out with my family. I have a lot of nieces and nephews so there’s always a birthday party to attend or something to celebrate.
And I walk. A lot. My dog gets a lot of walks on the weekends.

Bridie: Definitely music. I can’t write without it. My tastes vary depending on what I’m working on. For A Distant Voice I listened to a lot of Taylor Swift, the Nashville soundtracks, Miranda Lambert, Luke Bryan, Steve Earle, Jana Kramer.
When I’m writing fantasy, I like movie and TV scores. The soundtrack to the first season of Once Upon A Time is a good one to write to. Also the Band of Brothers soundtrack.

Crystal: Thank you for visiting today. It has been a pleasure to visit with you.

In life you don’t find your voice. It finds you.

Violet Hayes knows how to survive the year living with her grandmother in the small town of Wandorah, Tennessee.

How do you keep a depressed sister happy?
How do you deny yourself your dream?
How do you avoid a friendship?
And how do you ignore a boy when he’s everywhere you turn?

He smiled and reached out to pull the guitar toward him. He strummed his fingers over the strings and played a few chords before glancing over at me proudly.

He offered me the guitar. “Your turn.”

“And what makes you think I can play?”

I snorted out a laugh and clapped my hand over my mouth in horror.

“Play away,” he said, ignoring my snort, and pushed the guitar into my hands.

I stared down at it with my mouth hanging open. The way my heart raced you’d think he’d pulled the pin on a grenade and handed it to me. Relax Violet. It’s an instrument. It can’t hurt you. Unless I tripped over it and broke my neck. And that could happen. Probably not entirely realistic while I’m holding it, but if I dropped it and then got up and tripped, it … oh dear god, what is wrong with me?

His mom called out his name and he gave me an apologetic shrug. “I’ll be right back.”

He left the room and I remained where I was, the guitar still burning my hands. It had been months since I’d played. Months since I’d felt that wave of joy I got whenever
my fingers ran over the strings.

A yearning, so strong it sent butterflies fluttering in my stomach, washed over me and my fingers moved. They ran over the strings, playing whatever came to mind. I
closed my eyes and let myself be swallowed up by it all. I allowed myself to forget and be something else. Someone else.

I didn’t know how long I stayed like that but a shuffle behind me forced me back to reality. I opened my eyes and twisted around. Carter stood in the doorway, a look of
wonder on his face and it made me squirm. I dropped my hands, rested the guitar
on his bed, and scrambled to my feet. “I should go.”

He moved toward me slowly, as though scared a sudden movement would startle me. “What’s wrong?”

“Nothing,” I mumbled and folded my arms across my chest, tucking my hands into my armpits where they’d be safe and wouldn’t stray towards anymore strings.

His brow creased and I saw him trying to work out what had happened but I didn’t want to talk about it. I tried to duck out of his room before he asked me anything. He
gripped my arm, stopping my quick exit. “It’s okay,” he said. “You’re allowed
to enjoy things. You’re not betraying your sister by having fun or doing the things you want to do.” His voice, filled with sincerity and kindness, caused a lump to take up residence in my throat.

His hand ran along my arm and towards my hidden hand. He tugged on it until he freed it and he squeezed my fingers gently. I shook my head because he’s right, but he’s wrong at the same time. It was guilt over Rose that stopped me doing things but
when it came to music, there was so much more to it.

Music destroyed Gran’s life. It ruined Mom’s childhood. I couldn’t love something
like that because if I did, I’d open myself up to the same hurt. And I’m not
anywhere near as strong as Gran. It would destroy me. It would be my trigger.

I wanted to tell him that. I wanted him to understand. But the words wouldn’t come out of me. 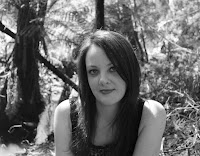 Bridie lives, daydreams and writes in Melbourne, Australia. She’s happiest at her computer, coffee in hand, Tim Tams on standby and her furry companion Poppy at her feet. When not writing she’s usually found with a book in her hand or playing with her tribe of nieces and nephews.

Posted by Reviews By Crystal at 1:03 PM