#GiveAway - Coach Maddie and the Marine by Blaire Edens 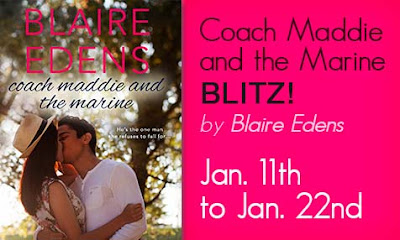 Coach Maddie and the Marine
by Blaire Edens

Please use the RaffleCopter below to enter for your chance to win a
$25 Amazon Gift Certificate.

After the combat death of her Marine husband, grief counselor Maddie Westerfield has thrown herself into helping other families—leaving no time for dating. Which is just fine with Maddie since falling in love again, especially with another man in uniform, is out of the question. No matter how gorgeous he is. Plus, she’s busy looking after her eight-year-old nephew for her deployed sister.
For the last eight years, Lieutenant David Sterling has lived with the guilt of losing one of his soldiers in an ambush in Afghanistan. So when the opportunity presents itself, he jumps at the chance to help the beautiful widow coach her nephew’s football team. But keeping things strictly professional between them is harder than he expected. And even though he knows a relationship with Maddie will only lead to heartbreak, he can't help falling for her.

He turned back to the dishes and tried to get his mind back on track.
He popped the last bite into his mouth and carried his plate to the sink. “That was great, Maddie. Thank you. Nothing like a home-cooked meal.”
Something electric cycled between them and he rose and walked around the table and put his hands on her shoulders.
She stood and turned to face him. Like magnets, they were unable to fight their affinity for each other. His nose nearly touched hers. He slid his arms around her waist.
“You move fast, Lieutenant Sterling,” she whispered.
Part of her wanted to resist, pull away from him and restate her determination not to fall into a relationship with him. But his masculine scent was jamming her brain and the other part of her, the wholly female part, carried the day.
“You have no idea,” he said, lightly kissing her neck.
She closed her eyes and leaned into the firmness of him. Dipping her head to the side, she allowed him to trace a lazy line down her neck with his lips, igniting a building warmth deep inside her. She rested her head on his shoulder and enjoyed the feel of his arms wrapped around her waist like iron bands. He wrapped her arms around his neck and he tilted his head. As their lips met, blazing energy sparked between them.
“We shouldn’t be…” Her voice trailed off.
“I can’t seem to help it,” he whispered against the sensitive skin of her neck.
She knew the feeling. Regardless of how much she rationalized it, tried to make her brain and body agree, her body always seemed to win out when he was within range.
She was tired of fighting the attraction. She kissed him on the lips. Ignoring the warning bells ringing in her head, she slid her tongue into his mouth. The taste of him heightened her arousal and she wanted him, all of him.
Just as she was about to suggest they move into the bedroom, the phone rang.
She pulled back and placed her hands on the flat muscles of his chest. “It might be Callie,” she said. It had been nearly two weeks since she’d heard her sister’s voice.
He grumbled under his breath, obviously irritated that she was letting the phone interrupt them. She found the phone on the table beside the sofa.
“Hello?” she answered breathlessly. “Oh, Callie, it’s such a relief to hear your voice.”
She listened intently, occasionally answering questions about Andrew. David sat silently on the sofa. If she hadn’t been so acutely aware of him she wouldn’t have even known he was in the room.
When the call ended a few minutes later, she placed the handset back into the charger and looked up at him. Tears welled up in the corners of her eyes.
“Is she doing okay?” he asked quietly.
“She’s fine. I just miss her so much and it hurts like the devil when she asks me about Andrew. I can’t believe he missed her call. He’ll be crushed.”
Sobs rocked her body, and she curled into herself. He sat down and wrapped her in the warm strength of his arms. He held her for a long time, murmuring soothing sounds into her hair. When she stopped crying, he raised her chin up so she could see him.
“I know how worried you are. I know what it’s like to have someone you love so dearly in the line of fire. We can talk about it anytime you feel the need. I’ll listen.”
She saw a softness in his eyes that he’d never shown before. They glistened with a tenderness she’d never guessed existed.
Was it possible that underneath his tough marine exterior he was the sensitive man she’d been looking for her entire life?

Blaire Edens lives in the mountains of North Carolina on a farm that’s been in her family since 1790. When she’s not plotting, she’s busy knitting, running, or listening to the Blues. Blaire loves iced tea with mint, hand-stitched quilts, and yarn stores. She refuses to eat anything that mixes chocolate and peanut butter or apple and cinnamon. She’s generally nice to her mother, tries to remember not to smack her bubble gum, and only speeds when no one’s looking.