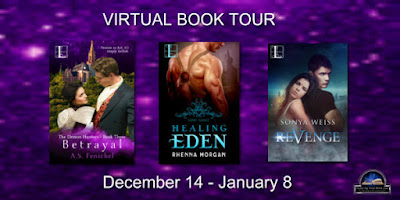 In service to His Majesty, one must be prepared for Hell.
To survive as a scullery maid requires hard work, discipline, and a stiff upper lip. To survive as a Demon Hunter is something else entirely. Elizabeth Smythe learned this after she was captured by Demons and rescued by Hunters. Now a Hunter herself, Elizabeth’s first task in this new and strange world is to aid the recently wounded Lord Reece Foxjohn, and get him back into Demon-slaying shape. . .
Reece Foxjohn is used to defying convention. He enraged his family by becoming a Demon Hunter, and prefers eviscerating the spawn of Satan to mixing with the ton. He is a man who doesn’t hesitate when he knows what he wants, and what he wants is Miss Elizabeth Smythe. To watch her behead the progeny of Evil is to behold a thing of beauty—one he must claim for his at all costs. . .

A.S. Fenichel gave up a successful career in New York City to follow her husband to Texas and pursue her lifelong dream of being a professional writer. She’s never looked back.
A.S. adores writing stories filled with love, passion, desire, magic and maybe a little mayhem tossed in for good measure. Books have always been her perfect escape and she still relishes diving into one and staying up all night to finish a good story.
Multi-published in erotic, contemporary and historical romance, A.S. is the author of the Mayan Destiny series, Christmas Bliss and many more. With several books currently contracted to multiple publishers, A.S. will be bringing you her brand of romance for many years to come.
Originally from New York, she grew up in New Jersey, and now lives in the East Texas with her real life hero, her wonderful husband. When not reading or writing she enjoys cooking, travel, history, and puttering in her garden.

In a world divided by war, falling in love is the ultimate betrayal.
Galena Shantos has never questioned her loyalty to Eden. As sister to the Myren king, she serves as a healer, one of the best in the army fighting to suppress the brutal Lomos Rebellion. She’s never doubted the importance of stopping the rebels bent on enslaving humans, until she spots a warrior across enemy lines—and knows instinctively that their destinies are entwined. . .
Rebellion warrior Reese Theron has nothing left to lose. He’s been forced to fight on the wrong side of a war he abhors in order to protect his family secret. His honor lost, as well as the trust of his own people, Reese has thrown himself into a battle he cannot possibly hope to survive. But after being rescued by a beautiful woman whose exquisite eyes seem to see him for more than the traitor he’s become—he may have just found a new reason to live. . .
Release Date: December 8, 2015
Publisher: Lyrical Press
Genre: Paranormal Romance
Format: Ebook

I write for the same reason I read—to escape reality.
Don’t get me wrong, my life rocks. I have two, beautiful little girls, a good husband, a steady job, and the kind of friends who will take you out back and beat you if you hurt me. But just like most other women, I’ve got endless obligations.
So, when the world beats me down, I slip into something…less realistic. Romance is a must. So is steamy sex. Nothing thrills me more than the fantasy of exciting new worlds, strong, intuitive men and the sigh of, “Oh, if only that could happen to me.”
So, if you’re picking up a book of mine, expect the unlikely. In the real world, most women don’t get swept off their feet by some billionaire Adonis or fall down the bunny hole into an alternate realm. In my fictional world, it’s a pretty safe bet.
Romantic Escape for the women who need it.

Their love is a ticking time bomb.
Juliet Sawyer was born to save the world. Gifted with incredible powers, she’s the only one standing in the way of The Great Extinction, the prophesied battle between Supernaturals and humans. In order to keep her sister safe and avenge her father’s murder, she’ll have to infiltrate the ranks of the Supernatural leaders who wish to destroy her. But the one thing she didn’t count on was falling in love…with someone who wants her dead.
The gorgeous and dangerous son of one of the Supernatural leaders, Riley West is in charge of training the group for war—now including Juliet, whose father is responsible for killing his family. But the more they train together, the more intensely their passion for each other burns. The deeper Riley is drawn in by Juliet’s beauty, the closer he gets to the secrets she keeps: one that will challenge everything he believes in—and one that could lead to her death. Together, can their forbidden love help stop the war? Or will one of them be forced to make the ultimate sacrifice?

From the time she was a child, Sonya knew she was destined to be a writer. If she didn’t like the ending of a book or movie, she would write her own ending. When her children were young, she often wrote stories to entertain them. At the urging of one of her daughters, she submitted a short story and to her surprise and delight, it sold.
Sonya loves writing all things romance whether it’s writing contemporary adult or teen fiction and still hasn’t lost the wonder that she gets to do what she loves.
She enjoys reading, movies, chocolate, and laughter and credits her daughters as being the sweetest blessings in her life.