Crystal: Today I am so happy to host M Pepper Langlinais. Welcome Manda! I'm so excited to have you here today. Would you share a little bit about yourself with us today?

M: Well . . . My name is Amanda, but I go by Manda and write under the initial M. I was raised primarily in Texas, lived for over a decade in Massachusetts and am so grateful to now be in California and away from snow! I’m married, have three great kids, a somewhat evil cat, and a hamster that I’m sure is trying to tell me something important if only I could understand her.

M: I don’t have a favorite, but there is a scene—the second in the book—that I love because it shows Cee’s and Marcus’s bond, which is central to the story:

“Vulpes.” Marcus rested against the quilted pink headboard of Cee’s narrow bed, his feet nearly touching the white iron vines at the end. “Cee, you’re not listening. What are the defining characteristics of Clan Vulpes?”
There wasn’t room for them both on the bed, so Cee sat on the moss-green shag that covered her floor. “Can’t be trusted.” She sighed, leaning her head against the bed and looking up at Marcus.
“You’ll never get a full essay out of that,” Marcus told her. “And anyway, I hardly think it’s fair to boil a whole Clan down to one generalization.”
“Stereotypes exist for a reason,” said Cee. “They’re born from a kernel of truth.”
“And then spread like… What’s that plant?”
Cee cocked her head in her best don’t-be-stupid look. “There are a lot of plants in the world, Marcus.”
“The one that takes over everything. Like, a vine…” He had that cute little frown he always made when he wasn’t sure about something, or was trying to remember. It made parentheses around his mouth. Just for a moment, Cee could picture Marcus, much older, sitting behind a desk and frowning down at… Something. That little frown would never change. At least, she hoped it wouldn’t.
“Ivy?” Cee suggested.
“No… I’ll think of it later. What about Ophidan?”
“I’m thinking about changing my room,” Cee told him.
Marcus’s gaze darted right then left, taking in the white paneling and frilly pink accents. “I’m not sure what that has to do with Ophidans, but okay. Why?”
Cee jumped to her feet. “I’m sixteen. It’s time for a change.”
“You’re not going to sing, are you?” Marcus asked.
“What?”
“I don’t know. The way you jumped up had me worried you might burst into song.”
Cee reached for a pillow and went in for a hit that Marcus batted aside easily. “I suppose we’re not going to get any more studying done then,” Marcus said, swinging his legs off the bed.
“At the very least, I need a bigger bed,” said Cee.
Marcus barked a laugh. “Your dad would never.”
“Why not?”
“Because so long as only one person fits in it…” He lifted his eyebrows.
Cee snatched up the pillow again, but Marcus bounded to the door, grabbing his backpack along the way. “Tomorrow,” he said and was gone.

M: That’s a complex question! The short answer is that my kids joke that I’m secretly a dragon in human form. Then there was a flash fiction piece I once wrote that I knew I wanted to do more with. Those two things somehow melded in my brain and became Manifesting Destiny.

M: The Great Divide, which is the sequel to Manifesting Destiny. Also, for fun and a change of pace, a Regency romance titled Brynnde.

M: No, but I have a very set routine I must go through before I write. I have to visit certain websites in a specific order and be done with them before I can feel cleared to give my attention to writing.

M: For this book, not really, excepting having to look up the scientific names of animals. Nothing particularly fascinating that I discovered there.

M: Until recently, I read a lot of Neil Gaiman. I still love a good Stephen King book now and then, too. I make time for anything by Tana French as well as Ben Aaronvitch’s Peter Grant series. I also generally enjoy Kate Morton. And I thought Hester Young’s debut novel The Gates of Evangeline was wonderful, so I look forward to more by her.

M: I’ve already done a lot of them! I’ve done mystery, and upmarket espionage, and magical realism, and now YA fantasy, and I’m working on this Regency romance . . . The thing is, I love to read so many different things, and I like to write all the kinds of things I love to read. So I’m all over the map. I think I’d get bored writing too much of the same thing anyway.

Still, I’ve had this idea for a manga-style graphic novel. I’d like to find an illustrator and do that some day.

Sixteen-year-old Cee has a hopeless crush on her best friend Marcus. Unfortunately for her, he’s gay. In the wake of Marcus’s older brother leaving home to join the Aerie, Marcus has become increasingly distant. When Cee discovers she has a troublesome dragon named Livian living inside her things grow even more complicated.


Marcus urges Cee to go to the Magi to have Livian removed, but the more Cee becomes attached to Livian, the more she questions the decision. Should she change her natural self for the crush who will never love her anyway?

Heat spread through her. Cee’s face elongated, her
arms extended, her nails formed into claws, and her feet became suddenly very
heavy. The bony spires erupted from her shoulders, and Cee was compelled to
double over to allow the wings to grow.
Throughout, Cee fought the urge to resist, though her
instinct was to do just that. She wondered what she looked like, caught a
glimpse of red scales, and realized her eyesight had become sharper. All the
details of the trees around her impressed themselves upon her brain: the cracks
and flakes in the bark, the saw-tooth edges of the leaves, and every little spot
and insect thereupon.
How big was she? Cee realized she was at eye level
with the middle of the trees. She looked down and saw her friends pushing
themselves even harder against the trunks, making way for Cee’s—or Livian’s,
she supposed—tail as it snaked by.
Yes, we’re very pretty, said
Livian impatiently. But we don’t have time for showing off just now.
The massive wings began to move, slowly at first,
gathering speed that put the force of the helicopter’s artificial wind to
shame. Cee realized she had no control over what was happening. It was all
Livian, and she was housed inside him, somehow, along for the ride.
It was equal parts thrilling and petrifying, bursting
through the treetops and being free of gravity. Cee would have liked to spend
more time experiencing it, but there was the helicopter, like a massive black
bug, and Livian went right for it. 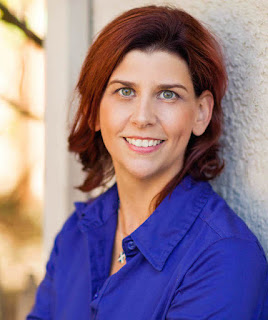 M Pepper Langlinais is an award-winning screenwriter, produced playwright, and
author. Her latest novel CHANGERS: MANIFESTING DESTINY, first in a new YA
fantasy trilogy, is now available from Evernight Teen.
M holds a Master of Arts in Writing, Literature and Publishing and a Bachelor of Science in Radio-Television-Film. She has a love
of Shakespeare, having both performed and taught his work, and has also interned on Hollywood film sets. M worked for Houghton Mifflin and Pearson before deciding to devote her full time to writing (and occasionally
parenting). She lives in Livermore, California with her family, cat, and hamster. Find out more about her and her books at PepperWords.com.