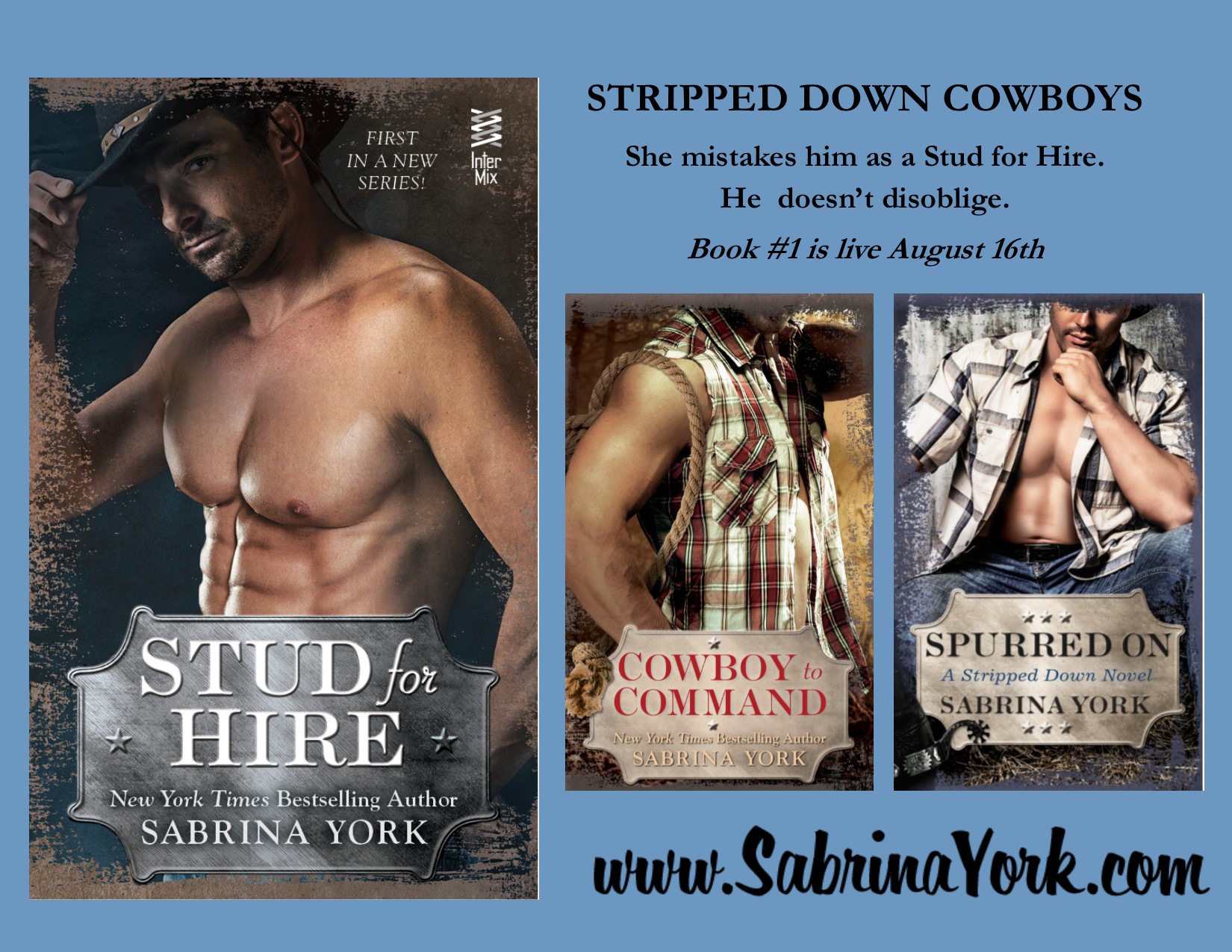 Stud for Hire
By Sabrina York

Just south of Fort Worth, Texas, you’ll find a little ranch where the hot, toned cowboys are ready and eager to take it all off and make your naughtiest fantasies come true...


When her sister plans a wild bachelorette weekend at the Double S Ranch, Hanna Stevens is pretty sure she’ll just grin and bear it while the other women get their fill of hot cowboy strippers. After all, Hanna has never met a man who made her really want.

Zack, Hanna’s future husband, offered to marry her and save her family’s ranch from financial ruin, and while she accepted, it was never what you’d call a passionate affair. But when she locks eyes with Logan, Hanna is suddenly overwhelmed by the feeling she’s always craved and never experienced: Pure. Animal. Desire...

The first in a new series of Stripped Down Cowboys from New York Times and USA Today Bestselling Author, Sabrina York.

Who else loves hot cowboys stories? I see a whole lot of virtual hands raising. You really must join me then for a trip to Double S Ranch. Sabrina York has created yet another completely engrossing story that is hot, steamy, suspenseful, and  heart warming. Honestly Stud for Hire is a story that is nearly impossible to put down.

Hanna Stevens is that wholesome sweet, innocent girl that will do anything and I do mean anything for her family. She's smart, has a great personality and has a few moves that throw a certain guy for a loop. She's set to marry a man that she doesn't love just to save the family's home. I bonded with Hanna quickly. She's one of those characters that you just know is going to be a new friend when you start the book.

Logan Landry finds himself full filling the bet he lost with one of the brothers at the Double S Ranch on the same weekend Hanna's sister booked for Hanna's bachelorette party. He has no idea he is about to see the girl he has secretly loved since high school.

When Logan and Hanna's eyes meet there is instantly a sizzling connection. When spend some time together on the hay ride it's amazing the bales didn't burst into flames from their combustible attraction. When they give into the sizzling attraction things get HOT and I do mean HOT quickly. Grab your cold drink and find a comfy spot for this book because your going to need it.

Then there is Zach, the  fiancee. I'll just say that Zach is one of those people that needs a lesson in humanity, kindness, and a serious butt kicking. I don't want to give too much away so I'll stop there.

There is a few very intense moments that left me holding my breathe and flipping the pages as quickly as possible to see what was going to happen next.

Overall, if you haven't guessed it yet I LOVED this book. Sabrina York is one of my very favorite authors and her books are always a must read. Trust me when I say Stud for Hire is certainly a must read for my fellow Sabrina York fans. If you love a hot and steamy cowboy story and you haven't read Ms. York's work yet, grab this one! I don't think you will be disappointed I know I certainly was not.

Stud for Hire is part of the Stripped Down Series.  It is the first book in the series and I know I already can not wait for book two. I can not wait to see what interesting and intriguing twist Ms. York has in store for us next.

You may find more of my reviews on Sabrina York's work here.