#NewRelease #SpotLight ~ THE DAUGHTERS OF IRELAND by Santa Montefiore ~ @SantaMontefiore 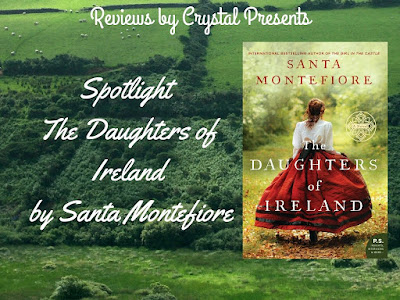 THE DAUGHTERS OF IRELAND

Last year, international sensation Santa Montefiore captured the attention of readers and critics alike with her novel The Girl in the Castle. With starred trade and rave reviews, readers understood why her books have sold over two million copies worldwide. This summer, Santa returns with THE DAUGHTERS OF IRELAND, the second book in the romantic and unforgettable Deverill Chronicles trilogy, which follows three women in Ireland through the decades of the twentieth century (William Morrow Trade Paperback Original; on sale 8/15).

In THE DAUGHTERS OF IRELAND, it is 1925 and the Anglo-Irish war is long over, but life will never be the same again. Pearched atop the emerald hills of West Cork, Ireland, Castle Deverill has been home to the Deverill family for hundreds of years, until it fell prey to a devastating attack during the war. Young Celia (Deverill) Mayberry and her husband bought the estate, determined to restore it to its former glory. For Celia, the castle holds many fond childhood memories of when she ran through its halls with her cousin Kitty Deverill and their friend Bridie Doyle, and she cannot bear to see it neglected.

But not everyone is elated. Although Kitty is grateful to her cousin for purchasing the castle and ensuring it will remain in the family, she is wistful for the days when she was the mistress of Castle Deverill. While she is content in her new life with her husband, Robert, and her adopted son, JP, her heart still yearns for Jack O’Leary, the man she left behind. As Kitty struggles with her choices, she must make a heartbreaking decision that could hurt those closest to her.

Wealthy and the toast of the town in New York City, Bridie Doyle has come a long way since she was the daughter of one of the cooks at Castle Deverill. But all her money cannot ease the pain over having given away her baby. When she finds love, she is tempted to return to her beloved homeland—even if it means she must face the woman against whom she has sworn revenge.

As Celia wastes no time, or expense, in hiring workers to renovate Castle Deverill, dark shadows are gathering once more, as the financial markets begin to shake. Now everything that felt so certain is cast into doubt. As their destinies collide, these daughters of Ireland must find the inner strength to build a new future.

A sweeping story of family and history, THE DAUGHTERS OF IRELAND is an exquisite novel set once again in the captivating Irish landscape.

Other Book in the Series:

~*~*~*~*~*~
Excerpt:
At last the castle came into view. The western tower where her grandmother had set up residence until her death was intact but the rest of it resembled the bones of a great beast gradually decaying into the forest. Ivy and bindweed pulled on the remaining walls, crept in through the empty windows and endeavored to claim every last stone. And yet, for Kitty, the castle still held a mesmeric allure.
She trotted across the ground that had once been the croquet lawn but was now covered in long grasses and weeds. She dismounted and led her horse around to the front, where her cousin was waiting for her beside a shiny black car. Celia Mayberry stood alone, dressed in an elegant cloche hat beneath which her blond hair was tied into a neat chignon, and a long black coat that almost reached the ground. When she saw Kitty her face broke into a wide, excited smile.
“Oh my darling Kitty!” she gushed, striding up and throwing her arms around her. She smelled strongly of tuberose and money and Kitty embraced her fiercely.
“This is a lovely surprise,” Kitty exclaimed truthfully, for Celia loved Castle Deverill almost as much as she did, having spent every summer of her childhood there with the rest of the “London Deverills,” as their English cousins had been known. Kitty felt the need to cling to her with the same ferocity with which she clung to her memories, for Celia was one of the few people in her life who hadn’t changed, and as she grew older and further away from the past, Kitty felt ever more grateful for that. “Why didn’t you tell me you were coming? You could have stayed with us.”
“I wanted to surprise you,” said Celia, who looked like a child about to burst with a secret.
“Well, you certainly did that.” Kitty looked up at the facade. “It’s like a ghost, isn’t it? A ghost of our childhood.”
“But it will be rebuilt,” said Celia firmly.
Kitty looked anxiously at her cousin. “Do you know who bought it? I’m not sure I can bear to know.”
Celia laughed. “Me!” she exclaimed. “I have bought it. Isn’t that wonderful? I’m going to bring back the ghosts of the past and you and I can relive the glorious moments all over again through our children.
“You, Celia?” Kitty gasped in astonishment. “You bought Castle Deverill?”
“Well, technically Archie bought it. What a generous husband he is!” She beamed with happiness. “Isn’t it a riot, Kitty? Well, I’m a Deverill too! I have just as much right as anyone else in the family. Say you’re happy, do!”
“Of course I’m happy. I’m relieved it’s you and not a stranger, but I admit I’m a little jealous too,” Kitty said sheepishly.
Celia flung her arms around her cousin again. “Please don’t hate me. I did it for us. For the family. The castle couldn’t possibly go to a stranger. It would be like giving away one’s own child. I couldn’t bear to think of someone else building over our memories. This way we can all enjoy it. You can continue to live in the White House, Uncle Bertie in the Hunting Lodge if he so wishes and we can all be terribly happy again. After everything we’ve suffered we deserve to find happiness, don’t you think?”
Kitty laughed affectionately at her cousin’s fondness of the dramatic. “You’re so right, Celia. It will be wonderful to see the castle brought back to life and by a Deverill no less. It’s the way it should be. I only wish it were me.”
Celia put a gloved hand on her stomach. “I’m going to have a baby, Kitty,” she announced, smiling.
“Goodness, Celia, how many more surprises have you in store for me?”
“Just that and the castle. How about you? Do hurry up. I pray we are both blessed with girls so that they can grow up here at Castle Deverill just like we did.” And Kitty realized then that Celia had placed herself here within these castle walls for more than merely the annual month of August. She was one of those shallow people who rewrote their own history and believed in the absolute truth of their version. “Come on,” Celia continued, taking Kitty’s hand and pulling her through the doorframe into the space where once the great hall had been. “Let’s explore. I have grand plans, you know. I want it to be just the same as it was when we were girls, but better. Do you remember the last Summer Ball? Wasn’t it marvelous?”
Kitty and Celia waded through the weeds that grew up to their knees, marveling at the small trees that had seeded themselves among the thistles and thorns and stretched their spindly branches toward the light. The ground was soft against their boots as they moved from room to room, disturbing the odd rook and magpie that flew indignantly into the air. Celia chattered on, reliving the past in colorful anecdotes and fond reminiscences, while Kitty was unable to stop the desolation of her ruined home falling upon her like a heavy black veil. With a leaden heart she remembered her grandfather Hubert, killed in the fire, and her grandmother Adeline who had died alone in the western tower only a month ago. She thought of Bridie’s brother, Michael Doyle, who had set the castle ablaze, and her own foolish thirst for recrimination, which had only led to her shame in his farmhouse where no one had heard her cries. Her thoughts drifted to her lover, Jack O’Leary, and their meeting at the wall where he had held her tightly and begged her to flee with him to America, then later, on the station platform, when he had been arrested and dragged away. Her head began to spin. Her heart contracted with fear as the monsters of the past were roused from sleep.

Santa Montefiore has written seventeen bestselling novels, which are translated into thirty languages and sold well over four million copies worldwide. She lives with her husband, the historian and broadcaster Simon Sebag-Montefiore, and their two children in London.


Posted by Reviews By Crystal at 1:39 AM