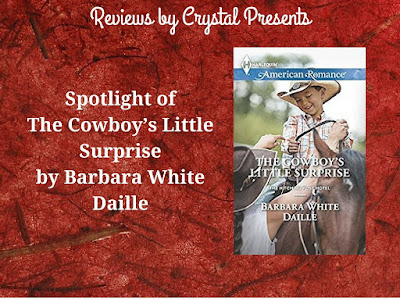 The Cowboy’s Little Surprise
(The Hitching Post Hotel #1)
by Barbara White Daille
About the Book:

THE LONG WAY HOME
A guy like Cole Slater is hard to forget. Tina Sanchez should know—for years since high school she's tried to bury the pain of Cole's cruel betrayal. But it's impossible to ignore the man she sees reflected in her young son's eyes now that Cole is back in her life—and about to meet the child he never knew he had.
Returning home to New Mexico, Cole is determined to put his playboy reputation to rest. Especially now that he knows there's a little boy looking up to him. And seeing Tina again reignites all the feelings Cole ran from as a teen. Despite his fear that he can't be the man Tina deserves, he's determined to try. For his son's sake—and his own.

This excerpt comes from a scene shortly after Cole has arrived at the Hitching Post. Tina is still shaken from their meeting, and his request upsets her even more….

She should have known better than to fall for Cole Slater. At the tender age of seven, she had already heard about his reputation as a sweet-talker. By junior high, he had progressed to a real player. And by senior high, he had turned love-’em-and-leave-`em into an art form, changing girlfriends as often as she replaced guest towels here at the Hitching Post.
Too bad she hadn’t remembered all that when he had finally turned his attention her way.
He shoved his hands into his back pockets, which pulled his shirt taut against his chest. Now, she felt herself flushing as she recalled the one and only time—
No, she wasn’t going there.
And he wasn’t staying here. “You must have made a wrong turn somewhere. I suggest you find your vehicle, wherever you might have left it—”
“I parked near the barn—”
“—and be on your way.”
“—and to answer your question, I came to see Jed.”
“What for?”
“He invited me.”
“Then I assume you’ve seen him already and, as I said, you can be on your way.”
“You and I need to have something out first.”
Please, no. Had he caught a glimpse of Robbie, after all?
He shifted his stance and crossed his arms over his chest. “I didn’t expect to run into you this soon, but since we’ve met up, it’s as good a time as any to talk.”
“I don’t really have anything to say to you.”
“But I’ve got something to say to you.”
He ducked his head, looking suddenly like the kindergartner made to give back the lollipop he’d just sweet-talked out of her hand. Even in those days, she’d have given him anything.
One night in high school, she’d proven that.
She turned to the truck and grabbed another sack. “I’m busy, sorry.”
“I’ll give you a hand, and then we can talk.”
“No.” He had stepped up beside her and stood only a few inches away. His nearness unsettled her.
The thought of him going back into the hotel upset her even more.
While she and Abuela had been in town, her son had stayed over at the ranch manager’s house on the property. But Pete’s housekeeper might be bringing Robbie back home any minute.
“All right,” she conceded. “Say whatever you want to say right here.”
“I’m sorry.”
She blinked. “What?”
He ducked his head again, then tugged the brim of his hat down, shading his eyes. “Look, I know I acted like a real jerk to you back in high school.”
“High school? You mean that lunchtime you turned me down when I asked you to the dance?” The time you humiliated me in front of everyone in the school cafeteria? “I’m over that.”
“You are?”
“Of course.”
“Well. That’s good. But I still feel I owe you an apology.”
“Oh, please. Don’t even think twice about it.”
“You’re sure?”
“Yes, I’m sure.” She forced a smile and hoped he couldn’t see her grinding her teeth in frustration. She just wanted him gone. Off the ranch. Anywhere but right here, right now.
“Well, that’s good,” he said again. “I’m glad you’re not holding any bad feelings against me, since we’ll probably be seeing a lot of each other.”
“I doubt it. The hotel keeps me busy and close to home. I don’t go into town much.”
“You won’t have to.” His smile didn’t look the least bit forced. “You’ll see me here. I’m back to working for Jed.”
~*~*~*~*~*~
About the Author:

Barbara White Daille lives with her husband in the sunny Southwest. Though they love the warm winters and the lizards in their front yard, they haven’t gotten used to the scorpions in the bathroom. Barbara also loves writing, reading, and chocolate. Come to think of it, she enjoys writing about those subjects, too!

Barbara wrote her first short story at the age of nine, then typed "The End" to her first novel many years later...in the eighth grade. Now she's writing contemporary romance on a daily basis. Sign up for her newsletter to keep up with the latest in her writing life:  https://barbarawhitedaille.com/newsletter.