Written Together
by Wendi Zwaduk

Wendi will be awarding a bracelet made by the author and a signed swag pack to a randomly drawn winner via rafflecopter during the tour. Please use the rafflecopter below to enter. Remember you may increase your chances of winning by visiting the other tour stops. You may find those locations here.

What if the woman he needs is the one he thought was out of his league?

Adam Pallas knows what he wants out of life—to teach history, to be happy and to have a hot woman by his side. He’s got one out of the three. He should be happy, but he’s not. There’s one woman who grabs his attention every time. The catch? She’s very much out of his league. Can being himself actually snag him the woman of his dreams?

Melissa Murphy isn’t looking for love, but every time she sees Adam her plans go sideways. The English teacher knows there’s a confident, hot man hiding behind the slightly nerdy history buff façade. But her past and the things she wants between the sheets tend to scare men off. She believes the odds may be stacked against them. Could it be their lives are perfectly written together after all?

She gripped the papers tight. Dear God. What if Adam found out from someone else before she could tell him the whole truth? Would he bolt? They were just friends, but some people were turned off by the idea of role-play and the other things she liked in the bedroom. Adam would probably be one of them. The man seemed so vanilla and wound so tight. And she was drawn to him. Go figure.

She sighed. No wonder she couldn’t make love work in her life.

Adam rounded the corner and waved. His grin widened and the spring entered his step. She snickered. The guy was so silly, but cute. She loved his determination. He’d cherish the woman who secured his heart. The memory of the hug the day before came to mind. She could feel his arms around her again. Warm, inviting and safe. She stopped in her doorway and waited for him to reach her part of the hall.

The jealousy showed up again. She had no ties to Adam other than the hug, but thinking of him with someone else stabbed deep in her gut. She wasn’t the type to chase guys who weren’t interested. What about Adam? Was he interested? Or just looking for friendship?

No, she’d focus on the platonic part of the pairing. God knew she needed more guy friends in her life and fewer dead-end boyfriends for her brothers to torture. 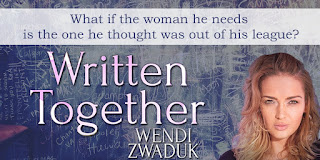 Wendi Zwaduk is a multi-published, award-winning author of more than one-hundred short stories and novels. She’s been writing since 2008 and published since 2009. Her stories range from the contemporary and paranormal to BDSM and LGBTQ themes. No matter what the length, her works are always hot, but with a lot of heart. She enjoys giving her characters a second chance at love, no matter what the form. She’s been the runner up in the Kink Category at Love Romances Café as well as nominated at the LRC for best contemporary, best ménage and best anthology. Her books have made it to the bestseller lists on Amazon.com and the former AllRomance Ebooks. She also writes under the name of Megan Slayer.

When she’s not writing, she spends time with her husband and son as well as three dogs and three cats. She enjoys art, music and racing, but football is her sport of choice. Find out more about Wendi at: