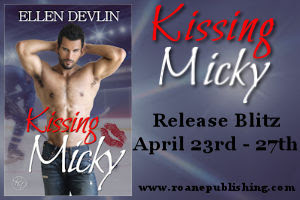 KISSING MICKY has fun-loving Liz Williams being set up on a date with a man straight out of her fantasies – a gorgeous 6’4” glove-dropping defenseman who has just been traded to her favorite hockey team. He’s smart and funny, and so is she, and there are sparks. Their shared best friends want this to happen between them, and it is definitely happening. A lot. But they’re not telling anyone, and neither of them really knows why. He’s her fantasy; she’s his escape. But eventually they have to see if their relationship can survive the bright light of day. And it’s not looking good.

Paige reappeared at the table, bustling a bit. “OK, guys, I’ve ordered coffee, and some really great dessert, and paid the bill already, including a nice tip. Unfortunately, Chris and I have to go, because there’s a thing I have to do tomorrow, and I have to prep tonight. I’m so sorry.”
Liz’s mouth dropped open in shock at her friend, as Paige came around the table and gave her a big hug.
Chris said, “What thing? Wait, we don’t get dessert?”
“It’s something I forgot about completely, sweetie. I’m so sorry. All my fault. We have pie at home.” She gave Tom a long hug from behind his chair, pressing her hands across his chest. “Have a great time, you two! Dinner was great! Love you both!”
She grabbed Chris’s hand and practically dragged him away.
Liz looked across the table at Tom as the waiter brought coffee and dessert. It did look amazing, but Liz didn’t see it, because all she could do was stare in pure, abject horror at the two name tags that Paige had stuck to Tom’s chest during her hug. The top one said:
“Hi, My Name Is Tom”
The one immediately beneath it had been altered to read:
“Your Name Is Liz”
“I feel like there might be something here that I’m missing.” Tom’s deep voice pulled her out of her thousand-yard stare. She looked up into his handsome face, which was wearing quite possibly the most endearing smile she had ever seen in her life. There was simply no getting out of this.
“You are wearing two name tags,” she said, the corners of her mouth lifting into a smile. “It’s Paige’s way of trying to be a good friend while simultaneously being a colossal, meddling pain in the ass. She knows there’s no reasonable explanation for these,” she waved at the name tags, “except for the real one, and that I’m a terrible liar anyway. So she’s forcing my hand.” She shook her head, sighed, picked up her fork, and waved at his dessert plate. “Start enjoying, and I will share my tale,” she said expansively.
Tom was astonished at the rapid turn of events. First, Paige had pulled Chris away so quickly and left them together. Second, Liz had looked completely panicked for a minute, but now looked calm, almost resigned. He picked up his fork and started eating.
“So, I don’t know if guys do this, not being one myself, but I will tell you that almost every girl I have ever met in my life has built for themselves some sort of fantasy at some time or another. And there is usually a leading male role in these fantasies. It might be a different guy in each different story line in her head, but probably the same basic formula for the guy. It’s a stereotype, but think, ‘tall, dark, and handsome.’
“Some girls get more specific than that. Think, ‘tall, blond, doctor, and loves dogs.’” She took a sip of coffee. “And then there are some girls who take their fantasies to an entirely different level when it comes to specifics. So, here’s where you need to follow along carefully, think ‘six-foot four, shaggy light brown hair, blue eyes, broad shoulders, defenseman on a hockey team, enforcer, amazing smile.’ I could go on, because believe it or not there are a few more, and they all fit, but I’m hoping you’ve gotten the idea by this point.”
Tom had stopped and was staring at her, his fork halfway to his mouth, wondering if she was kidding.
“So, you show up, Paige tells me you are the Micky I’ve been hearing about for years, and says Chris has decided that we would get along great and wants us to go out for dinner. I very carefully pointed out to her the details I just mentioned–which she knew, being my best friend for, oh, I don’t know, forever–and explained that it was a terrible idea, because I wouldn’t even be able to remember your name. She suggested a name tag. I said I wouldn’t be able to remember my own name…and here we are.”
Tom finished the last of his dessert quietly, sat back, and looked at her. “So, if I’m understanding this, what you’re saying is that I am your personal fantasy.”

Ellen Devlin lives in the Northern Virginia area with her family, both human and furry. She is an avid hockey fan and lover of animals.