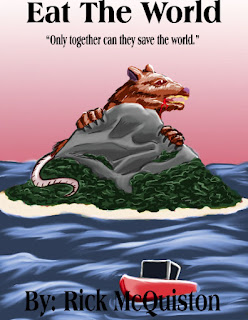 Eat the World
By Rick McQuiston

Crystal: Today I have the pleasure of hosting Rick McQuiston. Welcome Rick, I am so excited to have you here today.  Would you share a little bit about yourself with us today?

Rick: I guess I'm an average guy who happens to love anything related to horror. Fiction, movies, artwork, anything in or related to the horror genre. I'm also interested in music. When not writing, I find a creative outlet in playing drums, guitar, and keyboards.

Rick: My sixth novel (a zombie horror/thriller based in Metropolitan Detroit). I also have a spider-themed anthology.

Rick: Eat the World was spawned from my love of Mackinac Island. There are so many interesting landmarks and history attached to the island and mainland that I found it relatively easy to create characters to populate it. From there the pen took over.

Rick: I like to drink hot green tea while I write. It helps me focus.

Rick: I love the scene where the young couple on bicycles are confronted by the rats. I made the woman pregnant to make her a more sympathetic character, as well as making her more vulnerable. That scene still gives me the creeps. I’m very proud of it.

Rick: I write best with no background noise. Silence is golden.

Rick: Just to keep writing. When you have trouble coming up with ideas, look around you. Sometimes even the mundane can produce something interesting.
Blurb for Eat the World: 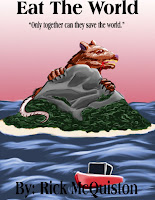 In picturesque Mackinac a growing army of rats are beginning to seep into the community of tourists. They seemingly appear out of nowhere, and it is up to ordinary people to gather their courage and battle the hordes.

But there is something more frightening beneath the surface, something that was born from the accumulated depths of Earth's creatures, something that can threaten the entire world.
Buy Links:
class act books | Amazon |  Smashwords

Excerpt from Eat the World:
Shoring up their hiking gear, Bruce and Tanner started to make their way down the trail. They had already travelled nearly two miles and still needed to go another mile until
they reached Point Aux Pins. Then it was a three-mile hike back to the Strayline dock before the final ferry for the day departed.
As the brothers ventured farther into the brush they became more isolated. There were few other tourists who explored the more rural landscape that Mackinac Island had to offer. Most people who came in on the ferries opted for Huron Street (more commonly known as Main Street) with
its beautiful downtown atmosphere and winding roads, and with Fort Mackinac perched on its limestone cliff, few people had the need to see much more.
Bruce led the way, with Tanner lagging behind a full dozen steps.
“Come on, Old Man, keep up with me.”
Tanner laughed.
Bruce looked ahead. By his calculations Scotts Road would only be about three or four hundred feet Southwest of where they were. Then, at least according to the map, they would head northwest past Scott’s Shore Road until they reached a series of small, unofficial trails that led straight to Point St. Clair. From there, it would be a straight shot along the coast to Point Aux Pins.
Bruce stopped. He needed a drink and figured it would allow his brother time to catch up with him. He set his backpack down and pulled his water bottle out.
“You know, Tanner, I think for Dad’s birthday this year we should see about taking him to… Tanner? Hey, where the heck did you go? Tanner?”
Bruce was alone on the trail.
Fear and worry mingled in his head. He was somewhat protective of his brother, almost to a fault, so it was quickly becoming difficult for him to remain calm.
“Tanner? Stop messing around! We gotta get going!”
No reply. Only the rustling of the brush in the breeze answered him.
Bruce began to panic. He needed to get help. He had to find a park ranger or some other hikers. He had to get back to the Nature Center Building. He had to find Tanner himself, before too much time passed.
What would he tell his parents if he couldn't find his brother?
A grapefruit-sized stone slammed into his hip. As he fell, Bruce couldn’t brace himself fast enough and landed on his side with a hard thud, the stone boring into his body.
“What the…”
He straightened up. He searched his surroundings for what caused him to fall and almost immediately saw it.
The substance was nearly transparent, but lumpy and mottled with streaks of gray- green that resembled wet cat litter.
Totally confused and frightened, Bruce opened his mouth to scream for help. 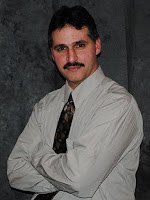 Rick McQuiston is a 49-year-old father of two who loves anything horror-related. He’s had nearly 400 publications so far, and written five novels, ten anthologies, one book of novellas, and edited an anthology of Michigan authors.
Rick is also a guest author each year at Memphis Junior High School.
He’s currently working on his sixth novel.