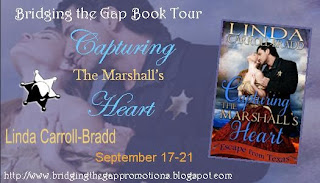 
Linda will be giving away a $10 Amazon gift card to 2 lucky commenters. So don't forget to leave a comment below, also use the Rafflecopter to enter for the prize.

For a dozen years starting in 2000, I lived in San Antonio, Texas. I’d never before lived in a city with so much history. The concrete steps leading into one of the city buildings where I went for job-related duties had a carved quotation from one of the city’s founding Spanish priests. Missions had existed from the early 1700s and one of the churches in the downtown area, San Fernando Cathedral, is the oldest active cathedral in the US.
When I saw a call for submission for stories involving “capture” as the theme, I started thinking about setting the story in my adopted hometown. Texans are somewhat proud of a history where their citizens lived with an underdog status. I wanted a heroine who would have been in a position like that who is looking to change her life. A tour of the Alamo meant a visit to the gift shop where I spotted books on the military history of the town. Where militaries flourish, so do establishments with women working the oldest known profession. So Jazzy Morgan was created as a young woman lucky enough to have been employed as a high-class companion, instead of a streetwalker in the red light district. Almost as soon as I gave her a name, she came to life in my mind as a person who speaks her mind and isn’t intimidated by much.
Next, she needed a worthy opponent and I had to figure out the one type of person Jazzy would want to avoid. A lawman, of course. US marshal Slade Thomas needed his own story, which became a search for a female bank robber. In mid-1800s, the wanted posters would have been only a general approximation of a person’s appearance, and I use that fact to hinder Slade’s discovery. Toss in a wild stagecoach ride, too many suspects, bandits who kidnap the women and a rollicking story of a western adventure was born.

Jessimay “Jazzy” Morgan boards a westbound stagecoach, intent on building a respectable future with the money earned in Miss Veronica’s Pleasure Emporium. Polite society is more taxing than she’d imagined, especially when her first thoughts of a handsome stranger center on the fee she’d likely get. When she finds him in her boardinghouse room, she can’t resist a little playacting. During a sexy night with the marshal, her needs are tenderly considered and she loses a little bit of her heart. The next day, the stagecoach is robbed and the women kidnapped. Jazzy is crushed at leaving a beaten Slade behind. Planning an escape against huge odds is tough, but confessing her past to a respectable man like Slade is almost impossible.
Boarding a westbound stage in San Antonio, US Marshal Slade Thomas realizes three of the female passengers resemble the wanted poster for a bank robber. The audacious behavior of one woman draws his attention and his suspicions lead him to search her room. When she returns, he can’t resist her playful nature and a rousing night of passion ensues. The next day on the stagecoach neither knows what to say to the other. Then bandits attack, steal the valuables and the women, leaving the marshal badly injured. When Slade tracks down the kidnapped women, he must choose between capturing the bandit and saving Jazzy. A choice between his duty and his heart.

Jazzy breathed in the scent of bay rum and eyed the fine cut of the tall man’s suit. She could still feel the press of his upper body against her shoulder when he’d leaned to release her skirt. Such solid chest muscles. From the corner of her eye, she gauged the cost of his tailored suit and fine felt hat, and started figuring the fee she could charge. Miss Veronica’s Rule #1: Aim for the highest reward. In her experience, a man with looks, money, and all his own teeth was a rarity.
Stop…no more thinking about fees. Her gaze flicked to the open window and she saw dry earth, low shrubs, and dust.
Miss Veronica’s was part of her old life.
When the handsome stranger first looked at her and cut off his own response, she’d feared he’d seen past her new traveling suit to the parlor girl beneath. Then she got to thinking this man could be the first conquest in her new life. The decision to invite him to her bed would be hers and hers alone. With regret, she shook away that thought. Her plan didn’t include seducing a man on her very first day of freedom. She had a goal, a destination, and higher aspirations.
The coach jostled over a rut and rocked violently. Jazzy’s head bumped against the wooden wall. “Ouch!”
“Ma’am, are you alright?”
The deep voice of the man to her left tickled up and down her spine. She loved raspy voices that hinted at secrets with every spoken word. Wouldn’t I love to learn his secrets? “I’m fine. The movement just surprised me.”
He leaned forward to look into her face. “Perhaps if we switch places, you’ll be saved from further injury.”
Jazzy gazed into dark brown eyes that seemed caring, and could only blink. This stranger was concerned about a bitty bump on her head? And they didn’t even know one another. “That is right kindly, sir.”
When he stood, she couldn’t help but admire how well the woolen trousers fit, displaying taut muscles. She curled her fingers into her palms to keep from reaching out to touch him. Miss Veronica’s Rule #3: No touching allowed until the fee is set.
How many hours left on this leg of the trip?

After years spent in the administrative support field, Linda decided to exercise another part of her brain and write a novel. She loved reading romance and figured that’s what she’d write. Easier said than done. After years of workshops and RWA chapter meetings, she finally saw her manuscripts place in contests. Twelve years after her first writing class, she sold a confession story. From that point on, she couldn’t be stopped and is always pleased when her sweet-to-sensual contemporary and historical stories find homes.
With interests as widespread as baking, crocheting, watching dog agility matches, and reading thrillers by Swedish authors, Linda is the mother to 4 adult children and grandmother to 2 granddaughters. She currently lives in the southern California mountains with her husband of 34 years and their two spoiled dogs.

If historical romance is a genre you read, I’d appreciate having you add the title to your Want To Read list on Goodreads. http://www.goodreads.com/book/show/18336317-capturing-the-marshal-s-heart

Or support her by “liking” her Amazon Author page
https://www.amazon.com/author/lindacarroll-bradd

Today I’m on Leanne Tyler’s blog revealing the “behind the story” inspiration for my sensual western historical, Capturing The Marshal’s Heart. I’d love for you to stop by and leave a comment. http://t.co/pvfnBQ3ikx