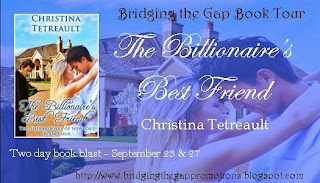 Don't forget to use the Rafflecopter below to enter for the prize!

Despite a wonderful family, a career she loves, and great friends, a void has existed in Lauren McDonald's life ever since her best friend Callie married billionaire Dylan Talbot. Although they have remained close, Lauren and Callie now lead very different lives, that is until Lauren meets wealthy CEO Kevin Walsh. Lauren believes he could be the man who will help make her life whole again.  That is until the night Nathaniel Callahan, her high school sweetheart and the one man she has always loved, shows up.

Although Nate ended things with Lauren before heading off to The Naval Academy and his life with the Marines, he never stopped loving her. Now 15 years later he is back to correct the mistake he made all those years ago.

With Nate back in town, Lauren must decide between the man who promises her the world and the man who has the power to crush her heart again.

1) The one man she never stopped loving is back in town.  Now Lauren McDonald must decide between the man who promises her the world and the man who has the power to crush her heart again.

2) Lauren McDonald never stopped loving Nathaniel Callahan even though when he left it nearly destroyed her.  Now with him back in town, she must choose between playing it safe or risking her heart again.

3)After graduation Nate Callahan left Lauren McDonald behind when he entered The Naval Academy and his life with the Marines. Now fifteen years later he's returned with one goal, to win back the woman he never stopped loving and failure is not an option.

The main doors of the room opened as Lauren paused her scan; the guest of honor was about to enter. Grabbing her camera, Lauren stood—only to immediately collapse back down into her chair when her knees gave out at the sight of Nathaniel Callahan standing in the doorway.
“Oh my God.” Her stomach hit the floor.
“What's the matter? Are you okay?” Callie's concerned voice sounded as if it were traveling a great distance to reach her.
Lauren glanced over at Callie and then toward the door again. Perhaps she'd imagined him. After all, why would he be here? The last time she'd heard anything about him, he was doing his third tour in the Middle East. Despite her hope that she'd started to hallucinate, when she looked again, he was still there, dressed in a black suit rather than his Marine uniform, his brown hair cut military short and looking much the same as he did the summer he'd broken her heart. She latched her hand onto Callie's arm. “Nate Callahan. He's here.”
She kept her eyes on him. Since that awful day the summer after senior year, she'd only seen him once. She'd been home visiting her parents during holiday break her freshman year of college. She’d spotted him in his parents' driveway from her bedroom window. They'd received more than two feet of snow the night before and he was helping his father shovel. That morning she'd stood and watched until the entire driveway was cleared. When he and his dad finished, he went back inside his house without so much as a glance toward her home.
“What?” Callie asked, her voice louder than necessary.
Out of the corner of her eye, she saw Kevin and Dylan headed back to the table. "Nate just walked in," Lauren hissed.
"Lauren that . . ." Callie's voice trailed off and she sat up straighter. Her head moved to keep him in sight as he walked toward his parents. "What's he doing here?" she asked, her voice lower now.
Leaning closer, Lauren whispered, "I don't know. We don't exactly speak." 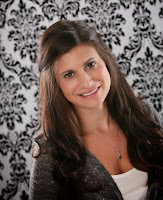 I wrote my first story with characters similar to those in the Sweet Valley Twins books at the age of 10 on my grandmother's manual typewriter. As I got older my stories and characters became more mature. During my freshman year at UMass Dartmouth, I read my first romance novel and fell in love with the genre. I have been writing contemporary romance ever since.

Today I live with my husband, three beautiful daughters and two dogs in Massachusetts. Whenever I have a free moment you'll find me either reading a romance novel or working on my most current story.

Posted by Reviews By Crystal at 12:15 AM