Crystal: Today I have the pleasure of hosting Sally J. Smith & Jean Steffens. Welcome! I'm so excited to have you here today. Would you share a little bit about yourself with us today?

Jean and Sally: Jean and Sally live in Scottsdale with their families and can now say they are full-time, professional writers. Yay! They work 3 days a week together, side-by-side, word-by-word, pounding it out, each bringing unique skills to the table and melding them into (they like to think) a hard-working, efficient writing team who have found a rhythm and working compatibility that surprised even them. We’re really good together, for partners in crime, that is.

Jean and Sally: After Jordan Welsh, our heroine, has been beat up by two thugs, her mother, Mary, comes to her house to be with her.

As Mary eased the ripped and scraped boots off her feet, Jordan traveled back to her seventh birthday, the sprained elbow and skinned knee courtesy of the shiny new bike.
Mary had been just as efficient and gentle then as she was now. The efficiency was no surprise. Jordan’s mother was a born organizer and handler. These attributes came into play getting Jordan stripped down and wrapped in a soft robe while warm water filled the tub. She eased her daughter onto the vanity stool to wait then turned her attention to the bath.
Efficiency, yes just a matter of taking it one step at a time. The gentleness, however, was a rare and wondrous thing. “I love you, Mom.” Mary O’Connell Welsh, heiress to the multimillion-dollar O’Connell Paper Products fortune, was on her knees by the jetted spa, shaking lavender-scented bath salts into the tub as it filled. She stopped and looked around. It was painful to see the redness of her mother’s eyes, the tremble of her mouth.
Mary cleared her throat and sniffed. “I love you too, Jordan.”
“I’m okay.” Jordan started to cry.
Mary swirled the water with her hand, mixing in the salts. She took a moment to lay her head against her forearm on the edge of the tub, took a slow, deep breath then got to her feet and held out her hand.
“Come on, young lady. Get your skinned-up ass in the tub.”
Jordan smiled through her tears. Mary was back in control.

Jean and Sally: Our first book together, Stealing the Moon & Stars—it was Jean’s vision to create a private detective worthy of the Scottsdale lifestyle. Her idea evolved into Jordan Welsh, a trust fund baby rebelling against the restrictions of her high society upbringing. We gave her a partner, Eddie Marino, a graduate from the school of hard knocks and a bit of a mystery himself. We read an article about funds embezzled from a charity. It was intriguing. We wanted to write a story about a team of detectives hired to clear up one matter who found themselves in the middle of something much more complicated than they could ever have imagined. And, of course, we wanted to set it in gorgeous Scottsdale, Arizona, where the Wild West meets Beverly Hills.

Jean and Sally: Final edits on Passion, Poison, and Puppy Dogs – A Danger Cove Pet Sitter Mystery.  It is due out in April. Lizzie Jones is working her way through veterinary school as a pet sitter in her home town of Danger Cove. When Lizzie’s best friend’s husband, world-famous bodybuilder Mr. Jupiter, turns up dead, floating in his hot tub, Lizzie sets her pug, Vader, and his canine buddies on the trail of a conscienceless killer. In a dog-eat-dog world, it’s the people you have to watch out for.

Jean and Sally: Jean makes coffee then she adds mood music playing softly in the background. We sit side-by-side, first reviewing and tweaking what we wrote the previous day, and then we go forward with the next sequence.

Crystal: Did you have to do a lot of research for this book or any other?

Jean and Sally: Yes, we’re nearly compulsive about it. We want to make sure that if our characters are going to jail or to court the facts are straight.

Crystal: If so do you have a fascinating fact that you have learned you would like to share with us?

Jean and Sally: It’s hard for a female PI to sit at a stake out and drink coffee over a long period of time. Needing to go to the bathroom can be a hazard when sitting on a perp. It’s true, straight from a female private investigator’s mouth. :)

Sally: Love me some Robert B. Parker—still can’t believe he’s gone. Gemma Halliday (of course), Stephen King, the old classics. Tess Garritsen, Carol O’Connell, J.D. Robb, J.K. Rowling (an amazing mind and great storyteller, IMHO), Jenn McKinlay, Tom Clancy, Grisham (the old ones), and oh-oh-oh George R.R. Martin!—OMG, people, how does one really ever have “favorites?” There are too many terrific authors to name just a few.

Jean: Would like to try my hand at writing a Western.

Sally: Would love to write any number of other genres, if only there were enough time—sci-fi, fantasy, hard-boiled mystery, thriller—for any and all ages, adult, new adult, young adult, children—contemporary, futuristic, and historical. So many genres, so little time (heavy sigh). 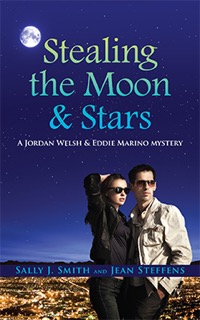 Scottsdale, Arizona, where the Wild West meets Beverly Hills--home of the rich and famous as well as the calculating and criminal. PIs Jordan Welsh, maverick heiress, and Eddie Marino, a graduate from the school of hard knocks, are hired to find out who’s embezzling from the Moon & Stars Children’s Foundation and stop him. But the two have stumbled onto an agenda darker and more complicated than they ever suspected. The bodies are piling up, and there’s no one Jordan can trust, not even her mysterious partner, Eddie, who’s hotter than a chili pepper and may be a killer. 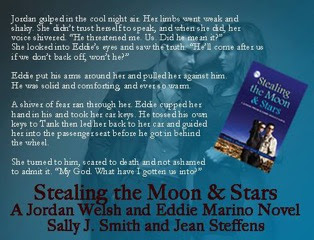 He hadn’t said a word since they got in the car. Jordan hated the silence between them.

When she couldn’t take it anymore, she turned to him. “You mad?”

She leaned her head against the headrest and relaxed, letting the mellow haze of the evening’s liquor woo her. Chet Baker crooned “Someone to Watch Over Me,” his voice low, sexy, and as intimate as a Sunday morning snuggle in bed.

A thrilling sensation blossomed until it was all around her, everywhere. Seduction. The romantic lure of the song, Eddie’s virile presence so close beside her, the way his hands slid smoothly over the wheel, his strong profile in the subdued light, his tongue moistening his lower lip, and the rhythm of his shallow, even breathing. Something stirred inside her and uncoiled like a slithering serpent.

Stop the car, Eddie. Pull over. Make love to me. Right here. Right now. She was suddenly so filled with desire, she caught her breath.

I need you. I can hardly stand it. She couldn’t bring herself to say it. Why not? What stopped her? It wasn’t as if she were a virgin. Maybe she was expecting too much from sex with Eddie. But what if he let her down? What if she let him down? That’s
dumb. It would just be another sexual encounter. Wrong.

Stealing the Golden Dream is second in the Jordan Welsh and Eddie Marino series, which began with Stealing the Moon & Stars. 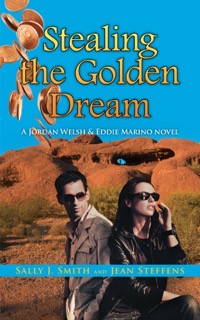 Scottsdale PIs Jordan Welsh and Eddie Marino of Shea Investigations are hired to guard the multi-million dollar
Dahlonega Golden Dream Coin Collection. The collection is stolen out from under them. A loved and trusted colleague is murdered. Eddie is being framed to take the fall for both crimes. His freedom’s at stake, their business is on the
line, and the lives of their loved ones are in deadly peril.

How far to the dark side is Jordan Welsh, society girl, willing to go to save Eddie from his own criminal past? Will the scheme she concocts with family and colleagues find the golden coins? Restore the reputation of Shea Investigations? And will she be in time to stop the killer from murdering the man she loves?

The image of Eddie with Sofia Vercelli was imprinted on her brain. But she had it in mind to put it aside until Eddie was in better shape. Piling more stress on top of all
he was already dealing with would not only be cruel and insensitive, it would also be stupid. He was much better at a good rousing argument than she. Better to wait until things had settled down to bring up the subject—but it was definitely a matter she intended to learn more about. 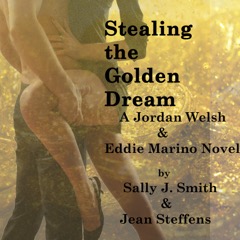 Jordan made her way through the house, opened the patio door, and followed Sadie outside. She stood by the pool staring at the half-moon mirrored in the inky water. Jordan shivered in the cool breeze that rippled the reflection. March days in Scottsdale were perfect—warm, in the upper seventies, low eighties. But the evenings cooled down to the low fifties. The desert air was clean, seasoned with the faint scent of mesquite, creosote, and the chlorine in the pool.

She rubbed her bare arms. Eddie moved up behind her, slipped off his jacket and draped it around her shoulders.

He put his arms around her. “You know I wasn’t with her that night.”

“Why would she say it if it wasn’t true?”

“I’m pretty sure she figures if she does this I might take her back.”

Jordan looked up, trying to see his face, but it was cloaked in darkness.

“It’s never going to happen. I told her I’m with you now. While I don’t want anything to do with her, if her story gets me off the hook, I’ll run with it. I can’t revenge Muggs if I’m sitting in a jail cell.”

“You think I don’t know that?” Jordan said. “She’s willing to lie for you? To the cops?
She must want you back real bad.”

Eddie moved his hands to her shoulders and turned her around. “It’s all one-sided. Don’t pretend you don’t know that.” He pulled her close and kissed her hard, long,
and smoking hot as Louisiana pepper sauce. It burned all the way to her toes.

Eddie, the man she was born to love. She threw herself into the kiss, and before she
really knew what was happening, they’d made their way into the house and were
pulling at each other’s clothes.

He took hold of one of her legs behind the knee and lifted it. She wrapped it around him as he reached under the dress and caught the edge of her panties with the curl of
a finger. Sally J. Smith and Jean Steffens, are partners in crime—crime writing, that is. They live in the Valley of the Sun in Arizona, awesome for eight months out of the year, an inferno the other four. They write bloody murder, flirty romance, and wicked humor all in one package. 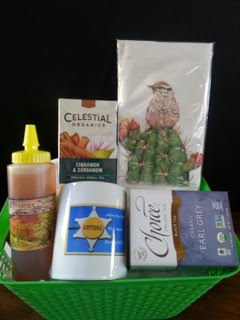 To celebrate the New Year and the Camel Press promotion of STEALING THE MOON & STARS,


bags to brew in your bright & shiny ceramic Scottsdale mug. Sign up for drawing before the end of January!Visit smithandsteffens.com and


use the form on the Giveaway page!
+
Enter to win a$25 Amazon GC Via RaffleCopter below
a Rafflecopter giveaway
Posted by Reviews By Crystal at 3:00 AM