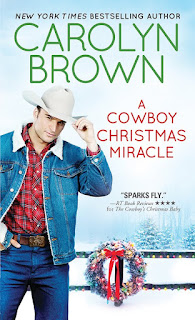 
It will take a miracle bigger than the state of Texas for these two feuding families to survive the holidays!

Opposites might attract…
The Brennans and the Gallaghers put aside their one-hundred-year feud every Tuesday for their weekly poker game. This week, the stakes are sky-high. Goaded to recklessness, Declan Brennan bets one thousand dollars that he can woo the next woman to walk into the saloon. A minute later, fiery-haired Betsy Gallagher pushes through the doors. If Declan can tame this wild Gallagher, he’ll have earned every penny.

If they don’t kill each other first…
Betsy can outshoot anybody in Burnt Boot and loves ranching more than anything—until she falls for Declan. He’s fallen for her too. But when she discovers what sparked their courtship, Declan will need a Christmas miracle to save his hide—and his heart.

NY Times and USA Today Bestselling author and RITA Finalist, Carolyn Brown, has published more than seventy books.  These days she is concentrating on her two loves:  women’s fiction and contemporary cowboy romance. She and her husband, a retired English teacher, make their home in southern Oklahoma.

The church doors always squeaked when they were opened. Betsy had asked Tanner a long time ago why he or some of the other men in the church didn’t at least put some oil on the hinges, and he’d told her that the preacher wanted them to squeak.
“It’s like this,” he had explained. “Folks all know that they’re going to squawk like a dying bird, so they get here on time. If they’re late, there’s no sneaking in and sitting on the back pew. The noise makes everyone turn around and the gossip flies around all week devisin’ tales about why they were late to church. Were they fighting or making out with their girlfriend in the hayloft? Will there be a baby in nine months?”
When she heard the familiar noise that afternoon at a few minutes until three, she laid her romance book to one side and turned to see if it was Preacher Kyle or Declan.
Declan carefully closed the door and started up the aisle. Betsy watched his swagger and thought again of his reputation. A frown drew her eyebrows down into a solid line and he raised one of his slightly.
“What? Are you backing out?” His drawl echoed off the empty church’s walls.
It should be a sin for a cowboy that sexy to be born into the Brennan family, and it definitely should be one for him to have a tight little strut that she couldn’t keep her eyes from. There was something about the way he stood with shoulders back, broad chest tapering to a vee all the way below that bull rider’s belt buckle that any woman on the face of the great green earth would take a second look at.
“I’m not backing out of anything,” she answered. “Are you?”
He removed his hat and brushed his dark hair back, nodded to Betsy, and sat down on the other end of the pew. Crossing his long legs at the ankle, he laid his hat on the gold velvet pew cushion and said, “I am not. I’m in this for the long haul, Betsy Gallagher. Looks like we are on time. Wonder where Preacher Kyle is.”
“I saw his truck out front so he’s probably in his office praying before he comes in here,” she said. “It’s not often he’ll be talking to a Brennan and a Gallagher in the same room, now is it?”
“He doesn’t know why we’re here. I just asked for a private meeting. And we are sitting on neutral territory here in the middle pews. Have you ever sat in this section before?”
Betsy shook her head seriously. “I have always sat on the Gallagher side of the church, just like you’ve sat on the Brennan side.”
Kyle crossed the room from the other side of the church where his office was located. “Good afternoon. Oh, I didn’t know you were bringing a girlfriend or, better yet, that it would be Betsy.”
“Not a girlfriend. Not even a friend,” Declan said quickly.
“But yet, here you are.” Kyle sat down on the altar, facing them. “And this problem you want to discuss—does it involve both of you?”
“It involves Christmas and neither of us,” Betsy blurted out.
“Okay.” Kyle dragged the two-syllable word out into four.
“We want to have a Christmas program. My cousin Angela is having a baby boy any day, and she’s got her heart set on him being baby Jesus. She and her husband will be Mary and Joseph. I realize we can’t have the four weekly programs that we usually do, but we think we’ve come up with a plan to have at least one,” Betsy said.
Declan picked up explaining when she paused for a breath. “Christmas is on Friday. You could announce it on the previous Sunday, and we could have the program on Wednesday night. That’s a Bible study night anyway, but it would work out real good that way, having it right before the holiday. And everyone knows what to do at the program. The nativity scene and the story of the birth of Christ are pretty much the same every year, so three days will be plenty of time for folks to get it ready.”
“Does this mean the Gallaghers and the Brennans are going to work together on this project of making this happen? You know we need costumes, props, a Christmas tree, decorations, and all that does not come cheap,” Kyle said.
“Hell no!” Betsy slapped a hand over her mouth. “Forgive me for cussin’ in church, but the families are not working together, and they’d skin us alive if they knew we were. It absolutely has to be a secret.”
“Go on,” Kyle said.
“We figure if we collect an item here and one there among all the families in Burnt Boot that, pretty soon, we’ll have plenty of stuff for the program,” Declan explained. “We just need you to give us permission to leave what we gather up here at the church and be our go-between on this mission. We’ll be telling everyone that it’s a secret but that they’re going to love what happens and that they can’t let anyone know who or what they donated. Everyone loves a secret like that.”
Kyle chuckled. “With the way gossip flies around this town, do you really think you can keep something like that a secret?”
“Oh, they’ll talk, but they’ll be very careful not to let either one of the grandmothers know anything because no one wants to suffer their wrath,” Declan answered.

Email ThisBlogThis!Share to TwitterShare to FacebookShare to Pinterest
Labels: @SourcebooksCasa