Crystal: Today I am thrilled to host Olivia Miles. Welcome Olivia! Would you share a little bit about yourself with us today?

Olivia : Sure! I live just outside of Chicago with my husband, young daughter, and two adorable maltipoos. I grew up in New England, where I tend to set most of my books, and while I adore small town charm, I am a city girl at heart in many ways.

Olivia : I have so many favorite scenes in CHRISTMAS COMES TO MAIN STREET, but this one might be my favorite because it sets the tone for the rest of the book and sets up a budding romance to boot!

“Are you entering the Holiday House contest?”
“Oh, my mother is, of course.”
“What about you?” Nate asked.
“What about me?” Kara shook her head. “I have an apartment, so…”
But he wasn’t going to let her off the hook that easily. “So? You make one hell of a gingerbread house. Why not enter one in the contest?”
Kara stared at him like he was half crazy, but he saw the interest that sparked in her eyes. “The gingerbread house is not a real house.”
“It’s still a house. I’ve read the rules.” He’d been sure to, just to make sure he adhered to them correctly and didn’t do anything to mess with his aunt’s chances of winning. “You think you can beat me with holiday decorations. Prove it.”
Her lips pinched as her little nose wiggled and then lifted, ever so slightly. “That’s the most ridiculous thing I’ve ever heard.”
“Why? Seems to me that a gingerbread house is about the most quintessential Christmas house that can be entered.” He locked the defiance in her gaze. “Oh, I see, you don’t think you can win.”
“I know I can win,” Kara said with a lift of her chin.
“Okay, then, a hundred bucks says the inn places higher than your gingerbread house in the contest.”
She hesitated, folded her arms around her chest, stared at him with fire in her eyes. “That sure of yourself are, you?”
“I’m a hard worker,” Nate said bluntly. “And as you said, it’s Christmas. Anything is possible.”
“I don’t want your money,” Kara said.
“I get it. You’re worried you won’t win.” He shrugged, grinning as her nostrils flared. “Tell you what? We’ll keep it friendly. The inn places higher, you owe me dinner. You win, I treat you.”
The motive was ulterior, but he couldn’t resist the thought of an evening alone with her. There was something interesting at play here, something he couldn’t quite put his finger on. Maybe it was the challenge of redemption, even if Kara wasn’t one of the bullies at his school. Or maybe it was just the promise of a dinner with a pretty girl. He couldn’t be sure.
“Mr. Griffin, you have a deal,” she said, extending her hand. He took in, surprised at the firmness of her grip, the confidence in her single shake, but he lingered for a moment, savoring the warmth of her palm, which felt so small in his own hand. A rush zipped down his spine at the softness of her skin, and pleasure of her touch, and he lingered before finally releasing her hand from his grip.
“A gambling woman,” he remarked, studying her over the rim of his glass as he took a long sip.
Kara shrugged. “Only when the odds are in my favor.”
He cocked an eyebrow, but a smile was pulling at his mouth. Win or lose, he stood to win something here, but from the little pinch of a frown between Kara’s brows, he reckoned she was going to be a formidable opponent.
“To the best Holiday House,” he declared, raising his glass to hers. “Good luck.”
Her lips curved into a smile, and there was a spark in her eyes when she met his gaze. “Oh, I won’t be needing any luck. But something tells me you will.” She winked, clinked his glass before he knew what had hit him, and with a quick sip, turned to meet her friends, leaving him standing in the middle of a party he hadn’t been invited to, with the sinking suspicion that her parting words were right on the mark.


Crystal: Do you have a favorite snack that you like to munch on while writing? If so would you mind sharing what it is with us?

Olivia : I’m working on my next Christmas book, actually. This book will be called HIS FOR THE HOLIDAYS and will be the second book in my upcoming Misty Point series, set in a fictional seaside town in Rhode Island. This one is a fake engagement story, and it’s a lot of fun to write. It will release next September!

Olivia : When I am not writing (or reading) or busy being a mother, I tend to start redesigning the interior of our house, which sort of drives my husband crazy. I also enjoy sewing, cooking, baking, and playing the piano. 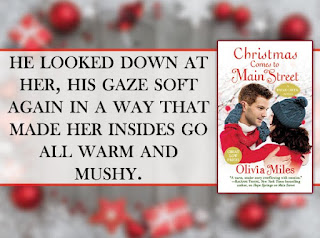 The mistletoe is out, and the gloves are off . . .

'Tis the worst season to be single, but Kara Hastings won't let a little Christmas funk spoil the festive season. Sure, running her own bakery is a little harder than she expected, but she can handle it. And she'll prove it to a certain infuriatingly handsome, bossy Big City guy. She may be sugar and spice, but she can kick his butt twice.

Nate Griffin is in Briar Creek only for the holidays, and he refuses to fall for the whole "small town, candy cane-scented Christmas Wonderland" thing. He's more interested in the fresh-faced cookie chef who always knows exactly how to get under his skin. So when Nate challenges Kara in the town's big holiday contest, it's not just the competition that starts to heat up. If he's not careful, Kara won't just melt his icy resolve against a small-town Christmas . . . she'll melt his heart too. 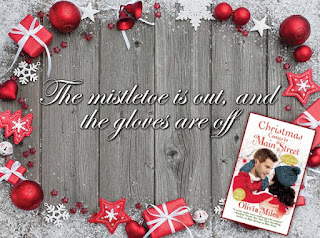 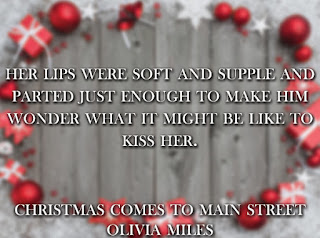 Having grown up in New England, Olivia Miles attended McGill University in Montreal, Quebec before settling in Chicago where she lives with her husband, their daughter, and two ridiculously pampered pups.

When she is not chasing after her little ones, she is hard at work creating feisty heroines and alpha heroes with a heart. A city girl with a fondness for small-town charm, Olivia enjoys highlighting both ways of life in her stories.