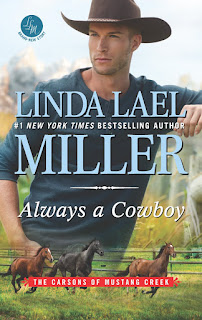 
#1 New York Times and USA TODAY bestselling author Linda Lael Miller— the First Lady of the West—regales readers with ALWAYS A COWBOY (HQN Books, September 2016, $7.99 U.S./$9.99 CAN.), the second book in The Carsons of Mustang Creek trilogy. Set just outside the rugged Wyoming town of Mustang Creek, the contemporary romance series features the three sons of a prominent ranching family and the feisty women who show these headstrong cowboys what true grit really is.

About Always A Cowboy:

There’s nothing that loner Drake Carson enjoys more than the quiet solitude of his family’s sprawling Wyoming ranch— especially when he finds himself closing in on a herd of wild horses, brazenly led by the rogue stallion that’s been wreaking havoc all over the ranch for years.

Drake is determined to settle things with his untamed adversary once and for all. But when a young woman suddenly appears, yelling at Drake, the spooked herd thunders away, leaving a stunned Drake wondering who this reckless intruder is and how soon he can get rid of her.
Grad student Luce Hale has come all the way to Mustang Creek from California, researching interactions between wild horses, domesticated animals and ranchers—and she intends Drake to be her case study. Drake is ready to send her packing until he learns that his mother has granted Luce unlimited access to their entire ranch and as much time shadowing Drake as she wants.

The last thing he needs is an enthusiastic greenhorn getting in his way—haphazardly chasing a herd of wild horses all over his property and unaware of the inherent danger. Unfortunately, he knows it’s up to him to stay close and keep Luce safe, no matter how much trouble she ends up causing him.

But Drake soon sees that Luce is a lot tougher and more capable than he thought. When he realizes that he actually prefers being with her over solitude, this lone wolf thinks he’s finally met the woman of his dreams.

Luce discovers that she has a weakness for hard-to-resist cowboys like Drake. But she also knows that Drake is an all-or-nothing kind of guy. Being with him means moving to Wyoming and leaving her life in California behind—including the dream job waiting for her there.

Luce and Drake both know the smart thing is for them to stay as detached as possible until she’s finished her research. But when danger threatens in the wild Wyoming country, Drake and Luce soon realize they’re prepared to sacrifice more for each other than they ever thought possible.

This edition of ALWAYS A COWBOY also features a personal essay by Linda Lael Miller—“Growing Up Western”—and an excerpt from FOREVER A HERO, the following book in The Carsons of Mustang Creek trilogy.

The daughter of a town marshal, Linda Lael Miller is the #1 New York Times and USA TODAY bestselling author of more than 100 historical and contemporary novels, most of which reflect her love of the West. Raised in Northport, Washington, the self-confessed barn goddess pursued her wanderlust, living in London and Arizona and traveling the world before returning to the state of her birth to settle down on a horse property outside Spokane.

Linda traces the beginning of her writing career to the day a Northport teacher told her that the stories she was writing were good, that she just might have a future in writing. Later, when she decided to write novels, she endured her share of rejection before she sold her first title to a publisher in 1983. Linda then successfully published historicals, contemporaries, paranormals, mysteries and thrillers before coming home, in a literal sense, to concentrate on novels with a Western flavor. For her devotion to her craft, the Romance Writers of America awarded her their prestigious Nora Roberts Lifetime Achievement Award in 2007. In 2016 Linda will receive a Lifetime Achievement award from RT Book Reviews. Currently the Hallmark Movie Channel is developing a series based on Linda’s Big Sky Country novels.


For more information about Linda and her novels, please visit lindalaelmiller.com.
Posted by Reviews By Crystal at 12:00 AM