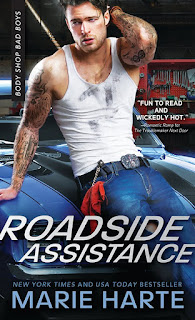 Roadside Assistance
by Marie Harte
About the Book:

Underneath the axle grease and tats
He’s a gentleman

Foley Sanders figured he’ll always be content with a life of cars and casual hookups. Until a run-in with Cyn, a statuesque firecracker with a hate-on for men, leaves him bewitched and intrigued—much to her annoyance.

Maybe Cynthia Nichols was a little hard on Foley, that muscular, tattooed, super-hot mechanic next door. But she’s tired of feeling defensive about her size and has sworn off men. She’s got a new job, new life, perfect plan. Foley has trouble written all over him—no way is she going to fall for his charms.

Foley might look like a bad idea, but underneath, he’s all gentleman. Too bad Cyn’s not buying it. What’s a bad boy to do when the goddess of his dreams won’t give him the time of day?

Caffeine addict, boy referee, and romance aficionado, MARIE HARTE is a confessed bibliophile and devotee of action movies. Whether hiking in Central Oregon, biking around town, or hanging at the local tea shop, she’s constantly plotting to give everyone a happily ever after. Visit marieharte.com and fall in love.

By Saturday afternoon, Cyn still hadn’t called Foley. She sat in her kitchen, staring at the scrap of paper he’d left behind. She’d plugged his number into her phone under “Big Man,” knowing Nina would never look Foley up under that name if she happened to nose through Cyn’s contacts. Cyn didn’t nickname her associates. All business, even in her social life, she organized with flawless attention to detail. Foley should have been filed under S for Sanders.
She stared at his number again, wondering why she kept dithering over what to do about him. The orgasm had softened her toward him. The man clearly had skills. He hadn’t asked for more than sex, and God knew it had been a while for her.
Why not enjoy him? She’d never been one for casual sex, but Foley was nice. He’d helped her with her car, which yes, had needed nothing more than a new battery—or so Matt had said. She’d refused to go down to Webster’s, surrounded by so much testosterone and Foley. Not when she had trouble keeping her thoughts—and lips—to herself.
She blushed, still amazed she’d turned his nice kiss into a friggin’ orgasm. Yet for all the pleasure Foley had given her, he hadn’t taken his own. What kind of guy did that? Especially with a woman as willing as she’d been. Hell, he could have mounted her outside on her front lawn and she wouldn’t have said no.
“I’m so easy. And desperate.” She groaned.
Fortunately, she had no one to hear her but herself. Nina and Matt had decided to put in time at the shop, while Cyn’s nephews helped out their grandparents, getting ready for the annual holiday party.
Cyn had wondered if she should bring Foley—for about three seconds. Any scent of a man with her, and her mother would no doubt pester and degrade her into a bitter, self-doubting mess by the end of the evening.
As hard as Cyn had worked to overcome Ella’s badgering, the little girl who lived on inside her constantly wondered if maybe Ella wasn’t right. Cyn probably wasn’t smart, funny, or independent enough to live on her own. And with her chubbiness, she couldn’t hope to land a decent man, not without her mother’s help.
Part of Ella was correct. Cyn didn’t feel fully satisfied with life, despite her successes. Even her sexual encounter with Foley had been lacking something. A closeness? A reciprocal lust? Then again, the man had not been faking that monster in his pants.
Hell. She fanned herself, dying to know what he looked like naked. She wanted to see all those tattoos. She pushed the call button on her phone then hung up before it could ring.
Should I? Shouldn’t I? Should I? Shouldn’t I?
With one more week until the holidays, maybe she should wait until after Christmas for a date. He likely had plans with family. That dimension of his character further softened her. Foley loved his mother. And Sam, a man he considered a brother.
How could she not like a guy who cared for his family? She loved hers unconditionally, despite her mother’s unintentional cruelty. Cyn knew that at heart, Ella wanted only the best for her daughter, despite how much she hurt Cyn with her criticisms.
Love could be strange. Just because Foley loved his mother, Cyn shouldn’t make him out to be a saint.
She dialed him anyway.
The phone started ringing. She brought it to her ear, her nerves on high alert as she waited on the call she’d been dying to make for two days.