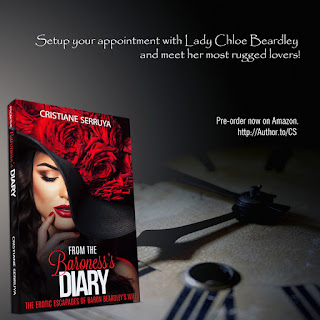 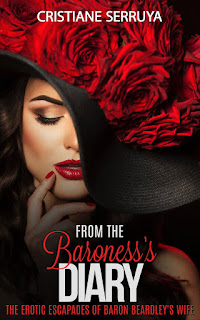 The diary pages which you are about to read—and those of a few other volumes which are due to be published soon—fell into the hands of X, who was an employee at Beardley Manor.
This candid record of a young woman’s love-life, Lady Chloé’s memoirs illuminate far beyond the usual run of erotic literature. These diary pages reveal how a young woman, even secluded in a lost manor in the middle of nowhere by a much older and autocratic husband, discovered pleasures she never would have thought could be wrought from her body and soul. It is a woman’s search for answers to the world’s most questioned topic, the riddle that plagues the universe: the pleasures of sex.
Last year, while visiting a world-renown art gallery in London I met with X and she told me she had done the paintings for The Baroness’s Series using Lady Chloé’s tales, and gifted me the salvaged diaries with the condition that I translate and publish them.
With great attention, I perused page after page—I must confess I couldn’t put them down until I read the last one! I knew I had an extraordinary tale of lust and love in my hands.
Lady Chloé de la Fleur Beardley, no doubt, never dreamed that her memories would someday be put before others’ eyes, but X and this author are completely sure she would be very happy to have you reading about her adventures—and misadventures.
So know, readers, that all this author had to do was to select the diary’s entries, translate them into English, and, voilá, with a bit of adaptation, bring Lady Chloé’s confessions to your hands. I do that with no guilty conscience as Baron Beardley passed away a month ago with no direct heirs, but a pompous nephew who is serving time in jail now because of…well, that is a whole other story.
Welcome to Lady Chloé’s world!

Mon Cher Journal,
I’m excited! I’m aroused! I—oh!—I am so happy.
Let me start at the beginning.
I am the sole daughter of an impoverished French Marquis and my name is Chloé de la Fleur—or rather, it was. Yesterday morning, it was changed to Chloé de la Fleur Beardley, because now I am a married woman.
My husband’s name is Joseph Georges Charles Fitzroy Von Tussen Beardley and he is the 11th Baron Beardley. He is 40 years old and a wealthy English peer.
When he was introduced to me at my London debut party, I found him to be charming. He is blond, with gentle blue eyes, lean, and not much taller than I am. He is more fit and more handsome than most gentlemen of his age.
We talked for a while under my mother’s vigilant eyes and when the baron left the party, he said we would meet again.
And we did, on five more occasions.
At one of those parties, after we danced, he invited me for a walk through the Duke of Belfort’s beautiful back garden, and I told him I had to ask for my mother’s permission, which was granted immediately. We walked to the unlit part of the garden, where pointing to a wooden bench, the baron asked me if I wanted to sit with him.
I smiled and agreed.
He told me about his late wife, who had died in labor, leaving him heirless; about his widow mother, the dowager baroness, who still lives with him—or rather, with us, since yesterday; about his properties in London and in Warwickshire, and his business interests. He is an intelligent and captivating man, and although it might sound boring, it wasn’t.
I asked a few polite questions and also answered politely when he inquired about my childhood, studies, friends, and my brief Parisian life.
When he bent his blond head and put his arm around my waist, pulling me against his chest, I let him kiss me.
When he pressed his tongue on my sealed lips, I opened for him.
“Soft as petals,” he whispered on my mouth before thrusting his tongue inside again and brushing it against mine.
And then his hand was fondling my breast, tugging at a nipple, and I squirmed on the bench. “Non, monsieur—”
“Joseph,” he corrected me, not stopping his administrations to my nipple. His tongue was now sliding down my neck and my thoughts became jumbled.
When his other hand wandered under my skirt and caressed my leg, I tried again to stop him, gripping his wrist. “Non, non. Joseph.”
“Yes, sweetheart?” He raised his head for a minute, but his hands didn’t move, neither from my breast, nor from my thigh. Well, his hands didn’t move, but his fingers were very active, massaging my breast and my inner thigh.
“Oh,” I moaned from the good, warm feeling that was spreading over my body.
“That’s it, sweetheart,” he whispered. Without taking his eyes from mine, he put his hand inside my drawers and began to rub my hair down there.
Without thinking, my legs opened and I leaned back.
His fingers searched and found my opening, and he slowly inserted just a tip inside, receding when I flinched.
“Oh,” I gasped, blinking at him. “What are you doing?”
He didn’t answer and began to rub another spot.
It felt good—very good, and I relaxed again.
“You’re so beautiful, Chloé.”
Soon he was rubbing me quickly and I was panting; he was breathing hard and I was writhing, until I screamed, “Jo-seph!”
I started when I heard myself brokenly crying out in pleasure, and pushing him away, I fled back to the party, going directly to the bathroom.
In the mirror my reflection showed reddened lips and a flushed face. I could see my puckered nipples peaking through the thin gauze-and-lace of my most beautiful evening dress. When I touched my drawers, they were wet.
I was confused, but—oh!—haven’t I liked it.

Posted by Reviews By Crystal at 1:29 AM

Email ThisBlogThis!Share to TwitterShare to FacebookShare to Pinterest
Labels: @CrisSerruya