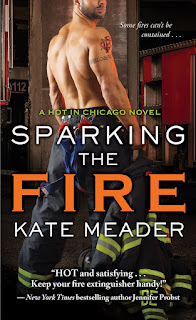 SPARKING THE FIRE
A HOT IN CHICAGO NOVEL, Book 3
By KATE MEADER

About Sparking the Fire:

Heating up reading lists this Fall will be Kate Meader’s highly anticipated Sparking the Fire, the “sexy and sassy” (#1 New York Times bestselling author Jude Deveraux) steamy third novel in the Hot in Chicago series, where former lovers unexpectedly reunite for a sizzling affair that will have the director yelling, “Quiet on the set!”

AN OLD FLAME STILL SIMMERS…
Wyatt Fox, resident daredevil at Engine Company 6, needs a low key job to keep him busy while he recovers from his latest rescue stunt. Consulting on a local movie shoot should add just enough spark to his day. But then in struts Molly Cade: the woman who worked his heart over good, and then left him in the Windy City dust.

BUT WILL A NEW SHOT AT LOVE LEAVE HER BURNED?
Actor Molly Cade, America’s fallen sweetheart, finally has her shot at a Hollywood comeback with a dramatic new role as a tough-as-nails firefighter that promises to propel her back into the big time. And she’s not going to let anything stand in her way—even a certain brooding, blue-eyed firefighter she’s never quite been able to forget…Their story is straight out of a script: irrepressible, spunky heroine meets taciturn, smoldering hero. But these two refuse to be typecast, and when the embers of an old love are stoked, someone is bound to get burned…

Kate Meader was raised on romance. An Irish girl, she started with Catherine Cookson and Jilly Cooper novels, and spiced it up with some Mills & Boon. Now based in Chicago, she writes romances of her own, where sexy contemporary alpha heroes and strong heroines match each other quip for quip. When not immersed in tales of brooding mill owners, oversexed equestrians, and men who can rock an apron or a fire hose, Kate lives on the web at katemeader.com.

Do you enjoy a flaming hot story with smoking hot fire fighters? Well have I got a book, actually a whole series for you! Sparking the Fire is the latest release in Kate Meader's Hot in Chicago series.

Sparking the Fire has a fabulous combination of a second chance romance, mystery, drama, love, family, and hot steamy scenes. Ms. Meader has created yet another must read story that I could not put down.

Molly Cade is living the Hollywood lifestyle that includes the bonuses of fame and the draw backs too. She's recently divorced from a famous actor that thinks the world and everyone in it revolves around him. Molly has been through a horrible time lately. She wants nothing more than this movie to turn her career back around. What she doesn't expect to find is a very handsome face from her past. I loved Molly. She's sweet and kind with just enough spunk to make for interesting sparks. She loves her job and is good to those she works with. She made an instant connections with the Dempsey family and fits in with them just fine.


Wyatt Fox is the quite brooding one of the Dempsey family. He has a HUGE secret that is revealed to the family in this book. I won't tell you what it is but I will tell you that it makes for an interesting touch to the story.Wyatt has a heart of gold that sometimes gets covered up with a bit of grouchy outside. He loves his family and would anything for them. I have loved each and everyone of the Dempsey family members. This family sticks together and will do anything to protect their own. Wyatt ends up with a job that puts him in close quarters with a lady from his past.

Molly and Wyatt's story was thoroughly entertaining to read. These two are great together. They can push each other buttons and smoldering attraction has a way of turning into flaming passion when they are alone together. Neither is looking for a relationship and sure doesn't need to be the center of attention right now. The force of their attraction is stronger than their resolve to try to leave each other alone.

I won't tell you a whole lot more about the story. I will tell you there is plenty of drama and action that had me flipping pages as quickly as I could to see what was going to happen next.

Kate Meader had me engrossed from the first page of this book all the way to the end. I have found her books to be wonderful  enjoyable reads. I can't wait to read more from this talented author. I know I will be looking for more of her work.

You may read more of my reviews on Kate Meader's work here.

September 23:
USA Today’s Happy Ever After – Exclusive Excerpt only

October 7:
Once Upon a Page
Ramblings from this Chick
Southern Yankee Book Reviews
Dog-Eared Daydreams
Oh My Growing TBR
Bujoijoi22
After Dark Book Lovers
Literary, Etc.
Misty’s Book Bin And More
Fiction Fangirls
The Book Quarry
Posted by Reviews By Crystal at 1:00 AM