Q:  Do you have a favorite snack that like to munch on while writing? If so would you mind sharing what it is with us?
A: I always forget to eat when I’m writing. It’s very difficult to eat with both hands on the keyboard. But if I had to pick the one thing I always have at arms reach when I’m writing it would be coffee—in any and all forms.

Q: When you are not busy writing wonderful stories to keep us lucky readers entertained, what do you like to do? Do you have a hobby?
A:  I love exercise. If I’m not at the gym, I’m hiking, or at the very least taking my dogs for a walk. It’s the only time when I can really let go of everything in my head and decompress.

Q: Where did you come up with the idea for either your current release or your current WIP?
A: There were really two significant things that inspired SPLIT. If you’ve ever loved someone who suffers from depression you learn that you never really know who you’re going to get when you see them. It’s as if you have to learn to love both sides of them—the happy and the not-so happy sides. This idea in relation to romance really intrigued me. I also took my daughters to see Phantom of the Opera. I always loved the story but was frustrated by the way it ended. I always wanted Christine to choose Phantom over Raul, but the logical side of me understood why she’d pick the safer of the two, after all, it’s hard to live out the dream of two kids, the white picket fence, and the golden retriever from the basement of an opera house. It made me wonder…what if she could have them both? 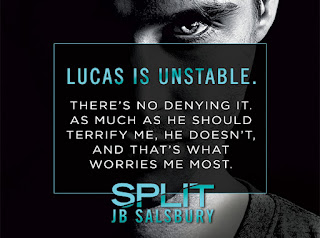 New York Times bestselling author JB Salsbury makes her Forever debut with a stand-alone unforgettable new novel, with a twist no one will see coming . . .

What do you do when you wake up with no memory of what you did last night?

Lucas spent the first half of his life protecting himself from others, but now his own mind is his biggest enemy. He doesn't know what happens when the blackouts overtake him, but he can recall the feelings—the rage, the confusion, the fear. Thankfully the quiet life he's found in Payson, Arizona has kept the darkness at bay. Until his boss's estranged daughter shows up in town, asking questions she shouldn't and sparking a desire Lucas can't control. Getting close to Shyann is the best thing that's ever happened to him, but when his blackouts return, unleashing the truth he's battled so long to hide, he may just lose her forever . . . 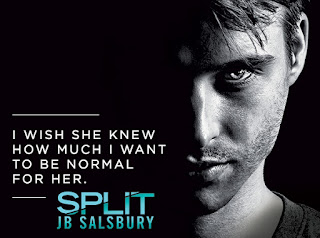 
“You can’t jump.”
She narrows her eyes on me. “Of course I can.”
“Is it safe?”
My grip on her grows tighter and she steps close enough that I can feel the heat of her breasts brush against my ribs. “Lucas, do you trust me?”
“No.” The word comes out on a shaky whisper.
A gentle grin softens her face and with both her hands she works to relax my hold enough for her to slip free. Seconds later she turns, takes four long strides, and disappears off the rock cliff.
A holler that can only be described as guttural exhilaration echoes off the canyon walls and slices through the trees.
I race to the edge and there’s nothing but a circle of white bubbles marring the once shimmering pond.
I wait for her to surface, and just when I’m about to jump in and rescue her, her head pops up out of the water with a feral howl.
“That was amazing!” She waves at me. “The water is perfect!”
With adrenaline coursing through my veins, I allow myself a moment to wonder what it would be like to be as free as Shyann. Everything I do is weighed against the danger of doing it. The threat of blacking out always pulling me back to walk the safer, less risky side of any situation. But something about her makes me want to try harder, makes me want to take a risk like other twenty-five-year-old guys. The sound of her squealing lights a fire in my chest that has me wanting to jump.
Risking a blackout might be worth the few seconds of euphoria I haven’t felt since…I can’t remember.
I think of backing away and yelling for her to meet me at the truck, but something pulls me toward her. Part of me wonders if it’s nothing more than wanting to be close, to keep her safe, because she belongs to Mr. Jennings and I owe him. But even as the thought enters my mind, so does another.
I want her to like me.
I want her to see me as brave.
I want to know what it’s like to be normal. 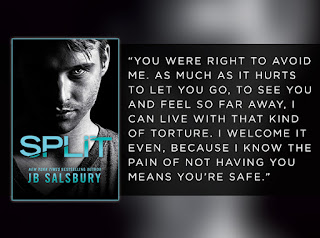 New York Times bestselling author JB Salsbury spends her days lost in a world of budding romance and impossible obstacles. Her love of good storytelling led her to earn a degree in Media Communications. Since 2013 she has published six bestselling novels in The Fighting Series and won a RONE Award. JB Salsbury lives with her husband and two kids in Phoenix, Arizona.

Posted by Reviews By Crystal at 1:16 AM